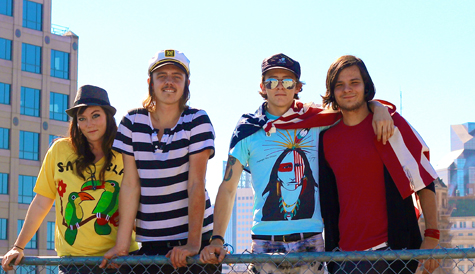 Two of the core members of local indie pop band Musical Charis are in separate rooms of the same apartment engaged in the same conversation. I am on the other end of the line. We’re speaking together on a conference call. It is a new experience for all of us.

I am talking to Blake Abbey and Jessica Brune, the band’s vocalists, and guitarist and keyboardist, respectively, about their upcoming Oct. 11, 2012 release of FOOL$ GOLD on JMB Records. Despite being miles away, I feel like I am dealing with a family.

They soon will be, I later find out. In addition to being band mates, they are engaged and live in the same apartment, along with the band’s bassist Colin Vieira, guitarist Bradley Abbey (Blake’s brother) and a bunny rabbit. It’s the apartment they are in now as they field my questions. Like family, they are talking over each other, and to make matters worse the reception is lousy. Despite the hiccups, we manage to carry out an engaging conversation as they fill me in on the album, touring and their musical values.

“It seems like a lot of things in music and art, fashion, and pop culture, a lot of it is like fool’s gold,” Abbey says, explaining how they came up with the album title. “It’s just shiny and bright, people want to hold it and touch it, but it doesn’t have the same value as gold.

“But the more that we grow in character and as a band, I think the closer we get to realizing how hard it is, how deep you have to dig for gold and the value of it when you get it,” he says.

Abbey, Brune, Bradley and Vieira spent about a week total, split before and after this year’s lengthy spring tour, recording with music engineer Joe Johnston at Pus Cavern. Now they have an album they hope will stand out against the bounty of overproduced, unoriginal material put forth in the music industry.

It was a collaborative process, a coast-to-coast exchange, Brune suggests. Others, including Jarrod Affonso on drums, Brian Brown on the keys and Shawn King, contributed. “Sunlight Stalker,” the last track on the album, was a joint effort between musician Chris King in Florida and Musical Charis. In a Postal Service-like exchange, King wrote the music, and the band wrote lyrics to accompany it.

The result was an album that Abbey says is quite unique, an attempt to produce “real gold.”

“I don’t think this CD is epic, but I think it’s one-of-a-kind, I haven’t heard anything like it,” he says.

It is somewhat more technical sonically than their previous albums, Abbey explains, and the rhythms are more intricate, adds Brune.

Since their formation in 2008, following the Abbey brothers’ and Vieira’s relocation from Florida to Sacramento, Musical Charis has been recognized for their folk appeal. In fact, they have been told on several occasions that they are living in the wrong generation. Brune and Abbey don’t dispute this.

“I think that musically we would be received better 30 years ago. Old people love our music, the folk stuff that we do,” Abbey says. “It’s dubstep nation now, dubstep is taking over the world.”

While this album strays somewhat from that folk sound, Abbey and Brune agree that it is one they will likely revisit in the future. After all, it’s easy to switch up musical directions, Brune says, like whipping up a new batch of cupcakes.

“Some people might not like [the new album],” Abbey says. “But it was fun for me, which is the most important thing.”

If you want to produce something relevant in the art world, or bring back ‘the real gold,’ then you have to get your priorities straight, the way Brune and Blake see it.

Which simply means, “Do it because you love it,” Brune says, even if it means collecting pennies.

The drive, patience and desire all have to be there to move a band beyond the five-year mark, they say.

“The real dream is just living it,” Abbey adds.

The fourth track of the album, “The Gift,” is an ode to friends back in Kansas who are doing just this–living the “rock n’ roll” lifestyle of loving, having fun, being broke and not caring. It’s a fancy-free philosophy the members of Musical Charis put into practice as well.

They primarily work for themselves, sometimes working “under the table,” to make ends meet.

The same love of music inspired the band mates to open the Musical Charis Music School in 2009 in the building next to the Colonial Theatre. It started by just spotting the vacant building and asking the question, “What if?”

To this day, they teach music lessons out of Beatnik Studios, mentoring youth in playing guitar, piano, singing, songwriting and performing. Sometimes they will let their students open for the band.

Those who haven’t seen a Musical Charis show should know that no two performances are alike, partly because they are just as willing to share the stage with anyone who wants stage time. Thus they have become known for their high-energy, unpredictable performances.

“We never plan anything,” Brune says. “We’re not like, ‘Oh, it would be so epic if we did this and that.’ We just kind of roll with it and have fun.”

During a show, the stage is treated as a shared space. The band rotates auxiliary drummers and guitarists onstage or invites other bands to join in. Brune may take Abbey’s guitar mid-song, or Abbey might get on the drums. In any given performance, there might be a trumpet, saxophone, accordion, harmonica, congas or xylophone thrown in the mix. Additionally, just about anyone (with exception of belligerent drunks) from the audience is invited to come up and play an instrument.

“We consciously try to make it about everyone,” Abbey says. “It sucks being in a band playing the same show every night, especially in a small town.”

“I want people to go to [our] shows and be like, ‘We’re going to go have fun tonight and we’ll get to play an instrument,’” he says.

The invitation to participate is an intentional attempt to encourage local community-building, they explain, though they never force their audience members to participate.

So during any given show, 12 bodies might end up on stage. On one occasion an audience member was so engrossed in performing he fell off the back of the stage, Brune recalls.

It’s worth mentioning that this band plays a lot of shows, as many as 150 per year. This includes a 65-day national spring tour they plan annually, in addition to smaller tours throughout the year.

Playing so many shows and tours, including SxSW, it’s no surprise that the band has grown a distaste for the predictable party-goers looking to get blitzed. It’s a common pattern the band has noticed, and it inspired one of the tracks on the album. Against a dreamy, circus-y tune, “Fortune Teller” takes a stab at the molly kids, who equate their live music experience with popping pills.

“It became about a culture of just partying, waking up the next day and starting all over,” Brune says.

No doubt they’ll run into more of that during their West Coast tour following the Oct. 11, 2012 album release at the Townhouse Lounge.

Pill poppers aside, right now the four are contemplating house sitters to look out for the apartment and the rabbit while they are gone. The last tour they went on, their turtle died. 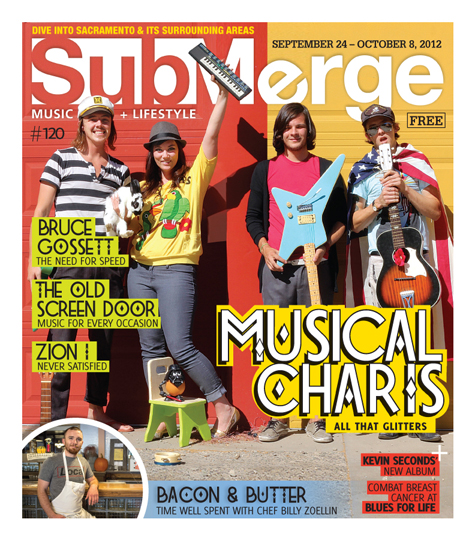 Hop on stage and have a blast at The Townhouse Lounge on Oct. 11, 2012 at 9 p.m. when Musical Charis celebrate the release of FOOL$ GOLD. Also performing will be Autumn Sky, Hey Zeus and James Cavern… And maybe you? Pre-order your copy of the album at http://musicalcharis.com/, and if you’d like to babysit a rabbit, drop them a line.