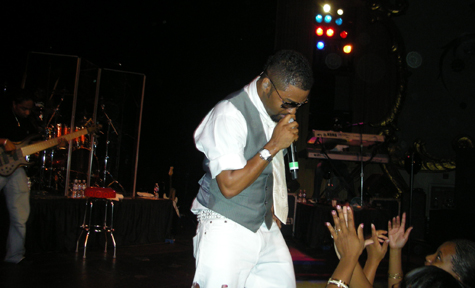 Arriving 30 minutes before the show started, I was surprised to see almost every seat in the Crest Theatre taken. I love Musiq Soulchild, but almost every time I dropped his name to someone, they’d never heard of the R&B singing soul man. So, you can imagine me entering the splendor of color and contour of the mid-sized Crest and seeing so many people.

Hometown guy MarKnoxx kicked, or rather danced (like Usher), things off at 8:30 p.m. Mr. Knoxx seemed to have a fan base who were not dissatisfied with the amount of clothes he lost as his set went on. His songs were heartfelt and backed up by two singers, guitar, bass, pianos, trumpet and a bangin’ drummer that a local fan told me was only 16 years old.

The folks at Conscious Vibes Productions made sure to raise anticipation of Musiq’s performance with an intermission that felt like 45 minutes. But in that time, I got to learn why everyone at this concert was eating popcorn (I’ve never before seen anyone eat popcorn at an enclosed concert) when my boyfriend returned holding a large cup of popcorn saying, “This popcorn was only a dollar!” Of course.

Then, the lights dimmed and on came the back-up singers, drummer and guitarists to start it all off. But when Musiq himself, standing all of about 5-foot-6 and looking urban-immaculate in pants, vest, tie, button-up shirt, aviators and well-groomed fro-hawk, fans (myself included) rushed down toward the stage. Musiq Soulchild played all the of fan favorites including “Buddy,” “Just Friends,” “Teach Me,” “Betterman” and “Time” while bouncing from side to side onstage. During a wardrobe change, two talented back-up singers enthralled the audience. Specifically, a lovely lady and true songbird named James Madison caught my attention with her chirping-ly elegant and soulful voice. When the Musiq man returned he sang his new hip-hop single “Radio” for the Sacramentan crowd. 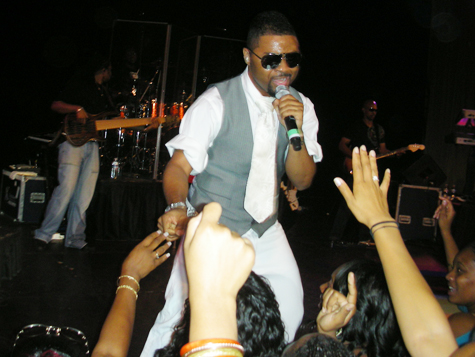 The show was overall entertaining, but the sound quality was disappointing. For whatever reason, the back-up singers and instruments drowned Musiq’s vocals. To add to all that, there was some scraggly sweaty girl with a bad weave in a pink top who insisted on singing along to every song; which wouldn’t be so bad except she sang so loudly and at so high a pitch that if you were in the front, you couldn’t hear Musiq Soulchild. It was so bad that the back-up singers even noticed and kept shooting the scraggly girl warning looks. I really wanted to throw something at her, or at least tell her that I paid $40 to hear the guy on the stage sing and not her.

But, Musiq Soulchild still had that R&B je ne sais quoi and musical mystique up until he abruptly ended his set and bid Sacramento fans farewell.