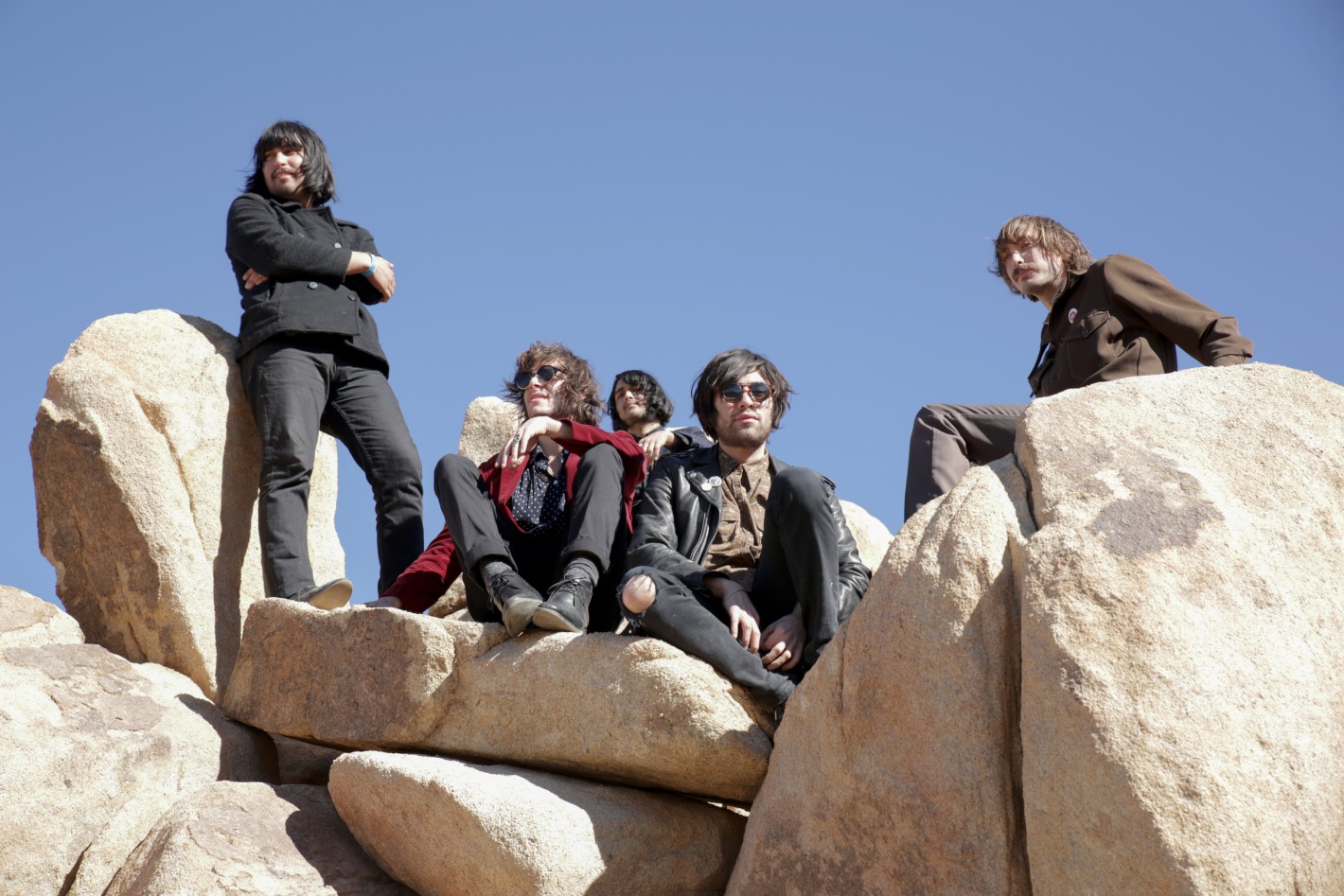 The Groove is in the Heart

There are all kinds of ways to explain music to people, and most of them are wrong, ill-advised, biased or flat-out dumb. That’s just the nature of the beast, especially when the beast is an objective, autonomous listener-experience that you will never truly know anyone else is experiencing in quite the same way you are. So it goes with styles, fashion, art, literature. And inevitably, styles come back around, man. The psychedelic ‘60s were too strong a statement—visually, politically, aurally—to have been locked inside the psilocybic subconscious of a million acid freaks, because the music was a hugely inventive, inclusive force. For Echo Park’s Mystic Braves, that force is strong, and their bottling of the integrity of ‘60s psych, while not exactly unmatched, is at the very least extremely serious. They’re also really, really good.

From the first few jangly notes of “To Myself,” the scorching opener from Mystic Braves’ third album, Days of Yesteryear, two things become apparent rather quickly. The observation attesting to the band’s loyalties to full-on ‘60s psych-pop is obvious—the album comes dripping in acid-party accoutrement, and it’s not a stretch to envision the quintet festooned in paisley as a mop-top gang swaying in unison before a liquid light stage show. The second is that the band members are not resting on any sort of trendy laurels, nor are they homogenizing an excavated scene for the benefit of shock value, nostalgia trip or disingenuous put-on.

On Days of Yesteryear, the band employed the sharp ear of Rob Campanella, of psych overlords The Quarter After, and well-known for his work with Brian Jonestown Massacre, as producer and engineer. Released through L.A. label/community arbiter of great underground rock ‘n’ roll Lolipop Records, Mystic Braves expanded their sonic playbook to incorporate new instrumentation and broader soundscapes, and in the process completed their best work to date.

The band’s also been getting breaks from a strangely fitting collaboration with Yves Saint Laurent that found the band’s music accompanying the fashion company’s recent Collection XIII runway show. That aside, the band have built up a frothing fanbase on the merits of their DIY roots and their seismic live shows, and—yeah, OK—their open embracement of ‘60s fashion, music and attitude. Mystic Braves organist (and Lolipop Records co-leader) Ignacio Gonzalez took some time out recently to chat with Submerge about all this and more.

It seemed to me that the new record has a very cinematic undercurrent. I’m not sure how much of that was predetermined. Was the record written more from the standpoint of a collection of songs, or as an album?
Some of the songs have been around for a bit. It’s kind of a collection of songs that came together at the time we started tracking. Some of them we even finished in the studio. I feel like this album is more an internal project, as opposed to our first two records, which were much more like a snapshot or a picture of what we sound like. This one was more internal in the sense that we looked inside ourselves and kind of took an outside look to the music. We experimented with different instruments and different sounds and took our time to think about the songs more. Not that we weren’t before, but it was a different process. The first two albums we did on our own, too. The first album was recorded by Wyatt Blair from Lolipop, and I recorded Desert Island at Lolipop, too. It was cool to be on the other side of the knobs this time around and get creative. Rob Campanella was really able to capture what we were trying to do. It was a really cool atmosphere.

How did working with Rob help hone or shape any of the direction or the nuances of the performances on Days of Yesteryear? I would imagine he’d be a huge influence on the band, having worked on a lot of the early ‘00s psych releases.
Yeah, he’s someone that we respect. We love his music and his work with The Quarter After is really great. His work with Brian Jonestown Massacre, too. He’s done a few albums that just showed us that he’d really get what we were trying to do, which is tricky. It’s hard to find, believe it or not, especially for the vibe that we’re about. To find someone who can really understand a vision and make it come to life, without losing integrity of what we’re trying to do is tough. Because of that dynamic we were able to really take suggestions and run with them. His honesty was very well-taken. It’s always nice to have a fresh set of ears and an objective perspective on what’s being made. I loved going back and forth and taking things apart and analyzing it, figuring out how it could be better. He really got it. The whole atmosphere was really conducive. The studio is in the basement of his house, and it’s just perfect vibes. He has every guitar in the world. And that’s another thing: he had a lot more instruments. We have a bunch of guitars and drums and stuff, but he had all these percussion instruments, tanpura drone, Indian instruments, pianos, organs. It was a cool palette we had to work with.

You were approaching these new instruments pretty green, right? I would imagine some of you would be multi-instrumentalists, but his gear sounds like it was somewhat foreign sonic territory.
Some of them, yeah. Most of the guys in the band play a little bit of everything. The one thing that was really foreign to me was the tanpura. You can hear it on “Great Company.” I’d never played one of those before. It was cool to be able to figure out how it worked and see where it took me. That was a cool journey.

In what ways do you feel like you’re able to help evolve or make new the psych-rock sphere; or conversely are you not that worried about reinventing the wheel, so to speak?
There are two sides to it. We kind of just came together because we like the same music. We understood each other. In a music community, it’s hard to come by that understanding on the level that we are at with each other. There’s that side to it; the music comes out the way it does because that’s the music we all listen to and like. There are inevitable influences based on our taste. Then there’s the other side where we love the music so much that we kind of want to keep its integrity in the face of this cluster of sounds that’s coming out of our generation. There’s nothing wrong with it, but I think there’s something that can happen when there’s too much going on. We have every kind of music that we could ever imagine at our fingertips, which can be really great, but can also be really confusing. For me and most of the guys in the band, we want to keep the integrity of rock ‘n’ roll music.

It seems like with Mystic Braves and the Lolipop Records family, there’s a really nice community and a scene that you guys are involved in that sort of acts as a fulcrum for sustaining new bands.
Yeah, Wyatt and I grew up playing music, being in bands, playing shitty shows and starting from nothing. It’s really the community and this sense of we don’t need anyone else. We can just do it ourselves, and I think that’s what’s driving the music community in L.A. is the sense that we don’t need any Columbias, we don’t need any crazy major labels to validate the music. We can just book our shows and play our shit. That’s something we really try to do is to nurture bands to give them a shot to do something, to be able to get out there and have a release out. There’s so much great music that will never be heard by anyone because there’s no outlet for it. We want to be that outlet. We have a recording studio and we don’t charge very much at all. You can be anybody and come in and record an album, an EP, a song. You don’t have to be in the circuit of the industry to be creative and express yourself and your music and share it with the world.

See Mystic Braves live in Sacramento at Starlite Lounge on Feb. 18, 2016. The band will be accompanied by the Mad Alchemy Liquid Light Show, which should only enhance your vibe. Go to Starlitelounge.net for more info.