The Best Medicine: Nahko and Medicine for the People’s Nahko Bear Talks Change Through Music 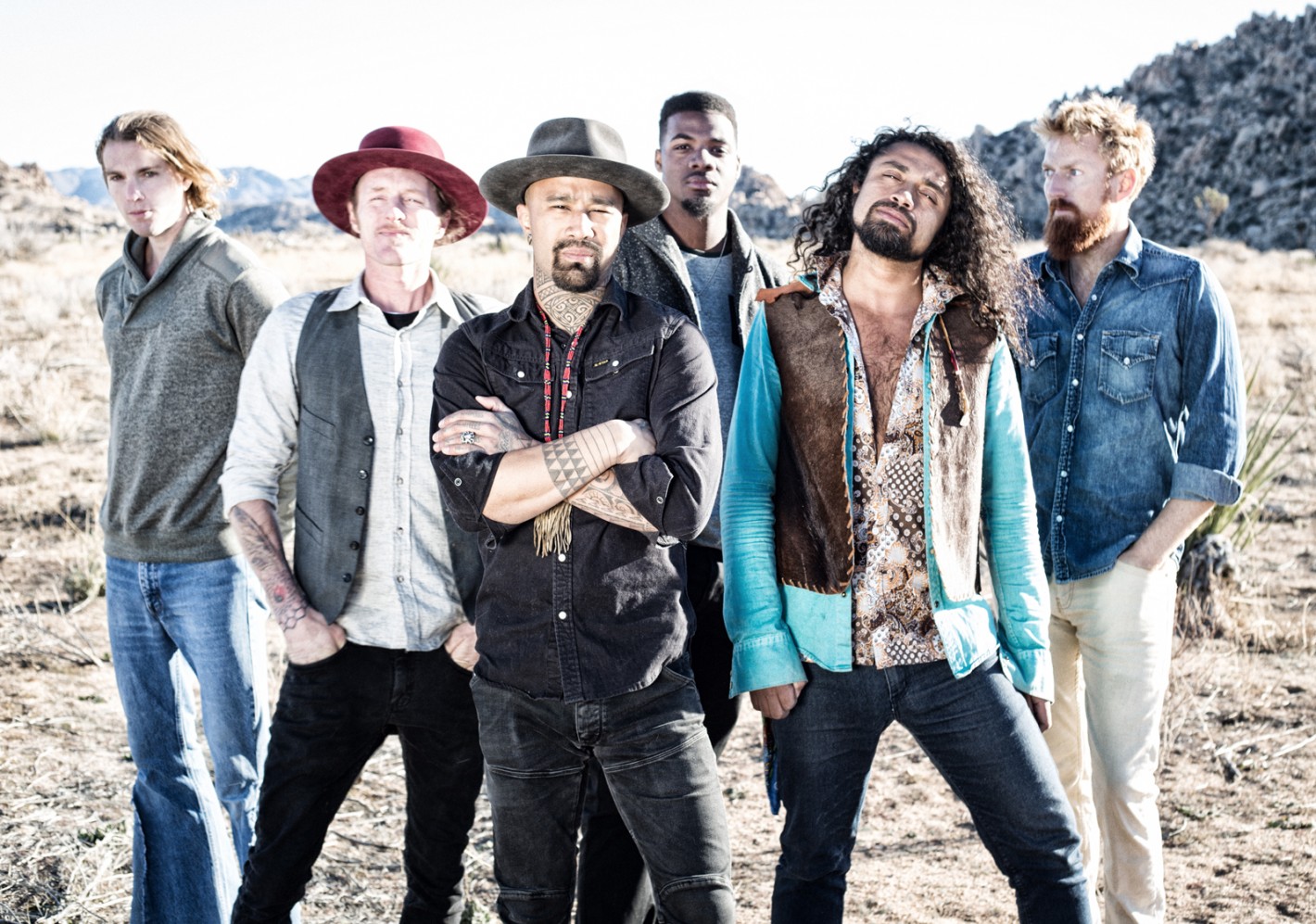 As California WorldFest celebrates its 20th year, the festival has maintained its promise from the beginning to provide music that connects us all. WorldFest isn’t just an ordinary festival; there’s a strong commitment to providing a quality lineup and environment that brings about a level of palpable community, and a positivity that feels downright progressive.

With that framework in mind, Nahko and Medicine for the People serve as a perfect addition to this year’s roster and one of the headliners to boot. The frontman and heart of the project, Nahko Bear, creates music that’s two-in-one; the bones of the songs are easy listening, a mesh of light-acoustic melodies, hip-hop vocal delivery, driving horns and peppy drums, all falling under the banner of world-fused jam-rock. But lyrically, Bear discusses everything from confronting his father’s murderer (“San Quentin”) to his mother’s subjection to human-trafficking, leading to his own birth (“So Thankful”). The two styles might seem dichotomous, but in truth the result is the creation of an open, honestly raw performance, creating a change in audiences that can lead to a visibly healing experience.

“It’s very obvious to me, I can watch people change,” Bear said. “There’s something about that exchange that continues to transform people, it’s always a different experience but there’s still weight to it.”

This wasn’t how it started though. In fact, it wasn’t something Bear had any intention to start. Bear grew up in Portland, Oregon, and moved to Los Angeles at the end of his teens, spending time in Hawaii on-and-off, with no plans to fully pursue music.

“It kind of started on it’s own,” Bear said. “I was in and out of doing some basic labor work, playing open mics, once in a while putting on my own show, sort of fine tuning. Never was there an intention to actually be a band. I like to travel, sometimes I’d travel the states and during the winter I’d come back and work on [a] farm. I began to realize the music was taking a life of its own and became a stronger calling.”

From that calling came the creation of Dark As Night, a collection of heartfelt, upbeat tunes that spread like wildfire. There seemed to be an instant audience surrounding the music, known as the “tribe.” That strong community support took Bear’s music to an international level. The album hit No. 4 on Billboard’s Top New Alternative Album Chart and No. 7 in Australia on Triple-J’s Top 10 Roots Albums of 2013. All this hype paved a whirlwind path to recognition, bringing the band to festivals and stages around the world, opening for top acts like Michael Franti and Trevor Hall.

Three years later, Nahko and Medicine for the People have followed up that success with their newest record, Hoka. The music continues to delve into a stronger signature groove; less acoustic and more full-electric throttle, deep bass-lines, ska-like driving horns and Bear dodging between quick hip-hop verse-delivery into sing-along choruses. The album pulls in guest appearances from Xavier Rudd, the Portland-based trio Joseph and Zella Day. Songs like “The Wolves Have Returned” and “It Is Written” stand out as more fleshed out, anthemic songs, footprints of The Medicine Tribe’s growth as a band. Overall, there’s something that just feels bigger. That comes not only from the instrumental high energy and group harmonies, but from the messages themselves. Lyrically, Bear continues not only to confront his own struggles, but to acknowledge greater societal struggles. The word “hoka” is a Lakota word meaning “call to action,” a cry before going into battle. Bear’s turned that sentiment into making necessary change; the drive to not only recognize a need, but do something about it.

“[Music]’s a vehicle that I use at the full throttle to do both those things,” Bear said. “It’s pretty fun.”

With the release of the single, “Make a Change” and the Make a Change Tour in spring, the band began releasing short videos of tangible ways to help the environment, one being horn player Max Ribner explaining how the band tries to minimize their waste on tour with reusable bags and cups. 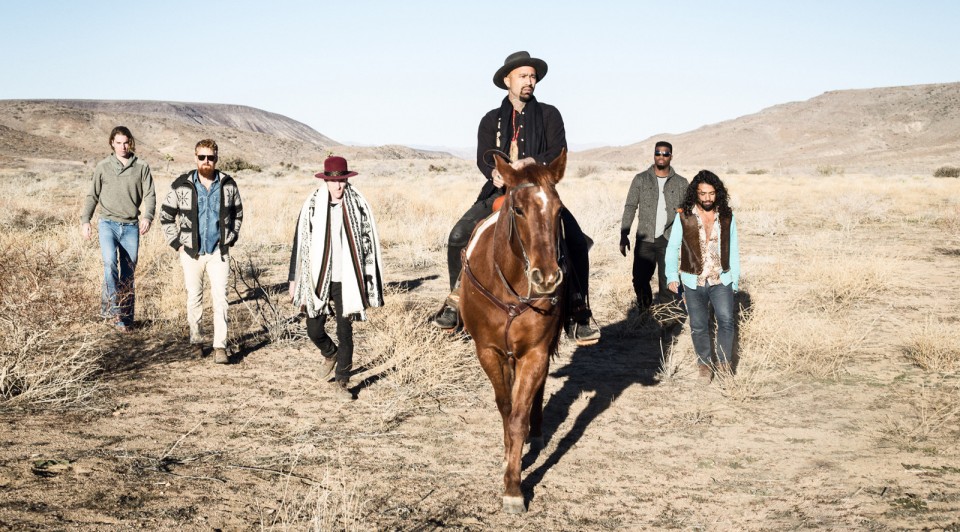 “I’m a very huge supporter of activism, artists that stay at the forefront of being involved in whatever political, environmental or social aspects of work,” Bear said. “It is a lifestyle, it’s a very strong hand in this path.”

That involvement hit a more national level recently when the band opened for a Bernie Sanders rally in San Diego.

“Bernie Sanders was finally the first person to inspire so many young people including myself to actually back a politician up,” Bear said. “There’s been a lot of kindling if you will, added to the fire because of [him]. I’m constantly inspired by people, progressive movements, who continue to work the tireless hours to preserve and protect and look towards a time where justice is served.”

That justice comes from Bear going beyond his work as a musician, using a hands-on approach, and “constantly working in a very personal way to go beyond the stage,” said Bear.

“I work for a handful of different organizations in the States, some of them focus on climate change, some focus on empowerment, some focus on cultural preservation,” Bear said. “At the moment I’m working on a project in September that I’ve been facilitating with a tribe in Northern California for, I guess you would say a triathlon, to raise awareness around Northern California’s watershed and the returning of traditional salmon to those rivers.”

The tribe is the Winnemem Wintu, and the triathlon is a two-day run, two-day bike ride, two-day paddle and four-day horseback ride around Shasta Lake. Bear will be creating a documentary surrounding the event.

“I’m pretty excited about it because I’m finally getting to flex my Rolodex of activists and be able to help this particular tribe,” Bear said. “The very foundation of it is a human issue. What happens down river is a result of what happens up river. Sometimes yeah, I play music, but I’m constantly working with things on the ground.”