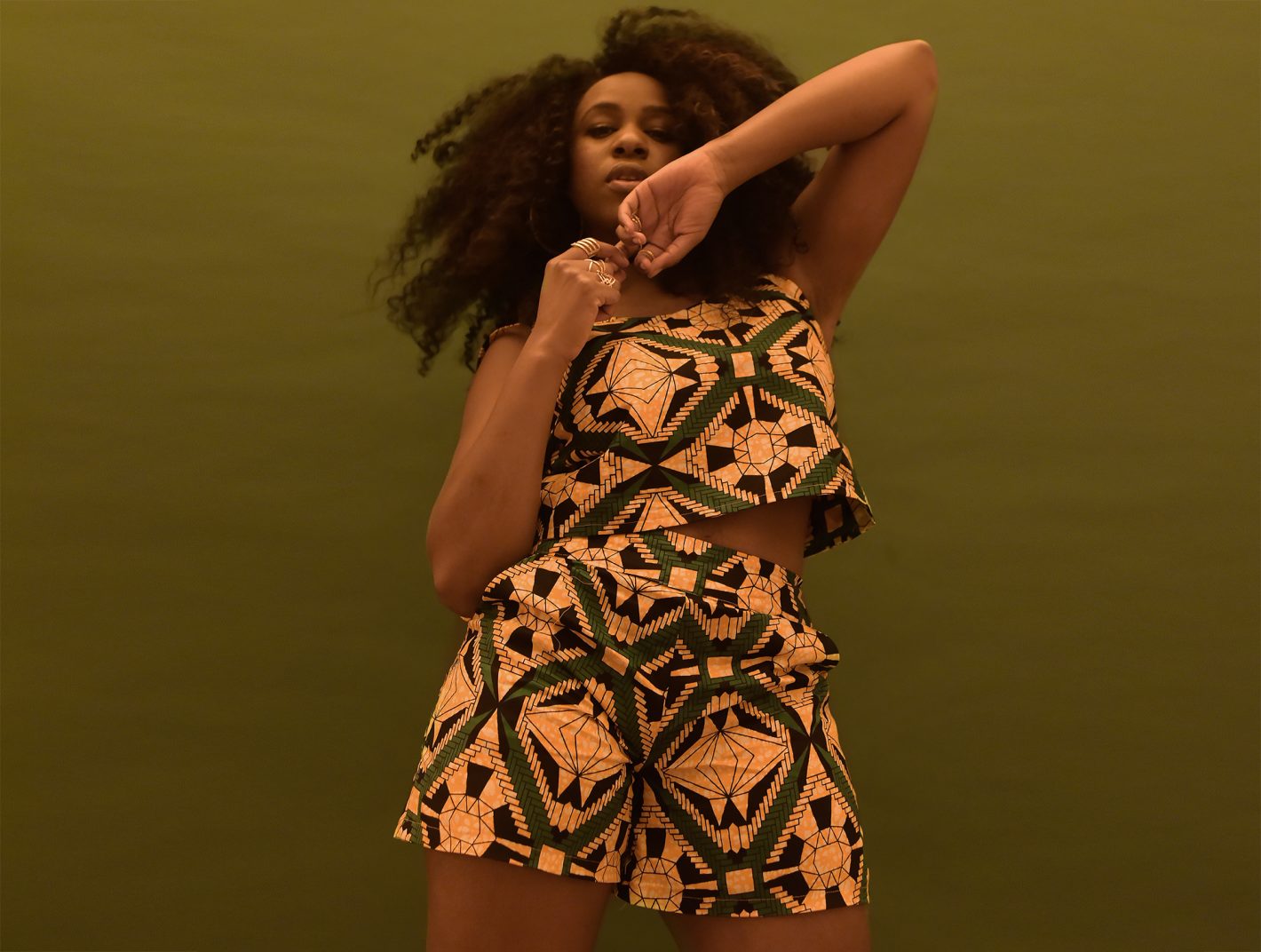 It’s the 2017 Coachella Valley Music and Arts Festival and Nao is about to perform her popular song, “Bad Blood.” Not to be confused with Ms. Swift’s ditty of the same name, sweaty fans erupt in a frenzy of anticipation for their falsetto goddess. While the first wonky synths enter the air, English-born Nao glides front and center like an angel ready to belt out a force both spiritual and divine.

As she lifts her microphone toward her lips, she and the crowd softly croon in unison, “You’re a holiday/A glass of ocean slipping down my throat/And landing on my hopes, I’m dreaming/Off the maps, no hidden grids, I’m fleeing …”

Gradually her voice edges from her signature falsetto further into the melody, ranging back and forth between a delicate tweet and a heavy roar. As the first bass drops and her own layered vocals come in for the chorus, the music shatters into a pool of futuristic R&B. Nao lets the sounds completely take control of her body. While dancing and twirling across the stage, swaying her full curls in absolute freedom, she and her audience are riding the same musical wave, getting lost in the lyrics together. With such a commanding presence on stage, it is unexpected to learn that Nao is a shy soul.

“I feel like when I’m on the stage I can handle it,” the singer, songwriter and producer expresses. “I really enjoy performing and connecting with people. It kind of feels really spiritual to have everybody together. Just all of us. Just seeing the audience and myself, the band just singing and playing. It doesn’t feel like the spotlight for me, it kind of feels like it’s for everyone. I think it’s only more difficult when I’m just living my normal life.”

With more than a million monthly listeners on Spotify and north of 26 million plays for “Bad Blood,” Nao is rising quickly. In addition to her Coachella appearance, she also has taken the stage at the Glastonbury Festival and has worked with the likes of Mura Masa, Disclosure and A.K. Paul—a pretty well-rounded résumé.

This is in definite contrast to her life prior to her solo career when Nao was a backing singer, teaching vocals and lending her voice for adverts. Though she is now in the spotlight and lacks privacy, Nao still believes the exposure is relatively calm. She jokes about how she is still able to enjoy solitude while she can and is appreciative of her fans or anyone who listens to her music.

“I honestly didn’t think it [her music] would reach anyone,” Nao says. “I think I’ve been singing for such a long time that, especially being a jazz singer, you’d think you’d get so used to people not listening to your music. I would do gigs and stuff and not have that many people turn up. That’s kind of what the jazz world is like. So then suddenly I started putting out my own original music and my music traveled across the world. I was shocked, to be honest; like I didn’t even dream of even getting this far. So I’m happy.”

Nao’s songs perfectly encapsulate feeling young, in love or lovesick. Whether rolling around trying to make sense of your own emotions or those of a lover aloof to your existence, Nao’s tunes are both soft and intense, like the powerful effects of being in love.

However, categorizing her music in one genre may be a challenge, as she fuses R&B, funk, soul and more. Merging so many styles of music, she has created her own genre, describing her sound as “wonky funk.”

“Wonky funk was basically how I described the first record [For All We Know] or the first two EPs [So Good, 15 February] because I think the industry was trying to put me into a category. Like I wasn’t quite R&B, and I wasn’t pop enough or straight retro funk, so I was like ‘I’m just gonna make up my own thing,’ and so I made up ‘wonky funk’ because I put elements in of music that I listened to growing up,” Nao says.

Those influences include Prince, Michael Jackson, and Earth, Wind and Fire, as well as elements of 1990s R&B like Missy Elliot and Aaliyah. She wanted to pay homage to those icons by making her music contemporary without sounding dated and adding electronics for effect. On her upcoming album, Nao says that wonky funk will still be a part of the record, but admits she wants to move away from the genre being the entire sound.

In September 2017, Nao released “Nostalgia.” The track emphasizes funky snares, plucky guitars and cheerful synths. The cover art for the song reveals a huge clue to her future album’s title. With what looks likes a contemporary design or constellation of the solar system, the image focuses on one planet—quite possibly Saturn.

Nao is planning to call the record When Saturn Returns. If you’re a novice to astrology like me, then the only thing you may know is your sign and something about, “When Mercury is in Retrograde.” Nao gives us a little more insight into the concept behind her upcoming album’s title.

“When Saturn Returns basically is the idea that when you’re born, Saturn is in one place and then it takes 29 years to orbit,” Nao explains. “Saturn is supposed to be the planet of lessons, so big life changes happen like every 29 years. I kind of felt like that was where I was at in life coming into my late 20s knowing that stuff was just changing—like everything I had ever known growing up and through my early 20s about love, about my career, about life was just put in perspective, basically. I felt like loads of my friends were in the same kind of situation. Sort of like coming of age again. You do it [make huge reflections] when you’re 18, but you kind of do it again when you’re in your late 20s as well. So that’s what this record is exploring really: my own Saturn return. I think that’s what I’m going to call it. It could change.”

Some may wonder why Nao never pursued a solo career until recently, but in her mind it wasn’t the right time with the industry that existed. Until recently, most pop stars or female artists had to look like a polished Britney Spears. If an artist didn’t have the entire package, he or she was unlikely to become a popular singer. When Nao decided to enter the ring, she had seen how the industry changed.

“I felt like the time was right, and I felt like there was a way to have an audience without going the conventional route,” Nao says. “And that was basically the internet. I was beginning to understand that the internet allowed you to be faceless. I felt like the record labels, they were always looking for the package: people who were super beautiful, super young, really marketable. I kind of didn’t really fit any of those boxes that we just spoke about. So in recent years I just felt like it was time to just give it a go and to see what happened. I felt like before, the world wasn’t quite ready for things that were quite lo-fi, quite rustic, because we’ve been in an era where everything was perfect, like airbrushed.”

Since the rise of the internet, it has always been a door for many who found difficulties breaking into the music industry. For Nao, this has given her courage and comfort in breaking through the barriers that limited artists before.

Nao says the concept of perfection means nothing to her anymore, and that once people realize that happiness and perfection do not necessarily correlate, then becoming happy is more tangible. With this huge lesson learned, she has been able to craft and develop her music, and through her music, she is able to express herself freely.

“I’m a Capricorn, so we’re kind of not really into showing that much emotion,” Nao says. “We are a bit pokerface … A bit cold sometimes. I think for me, when I’m natural, I don’t really speak to my family or my friends so much about emotion. For some reason or whatever that I can’t explain, when I sing and write music it just comes out naturally. I don’t need to go to a place. I don’t have to go to a dark room. I don’t have to think about anything deeply, it’s just already on my heart. When it comes to singing, it naturally comes from a deeper space and it is a more soulful and a spiritual place. So I feel like it’s quite a natural thing.”

Make sure to check out Nao on April 28, 2018, at Sol Blume at Cesar Chavez Plaza in Sacramento. The lineup for this inaugural soul and R&B music festival also features Jhené Aiko, The Internet, Goldlink, Sabrina Claudio and many others. For more information visit Solblume.com.