In the Yard, In the Garage 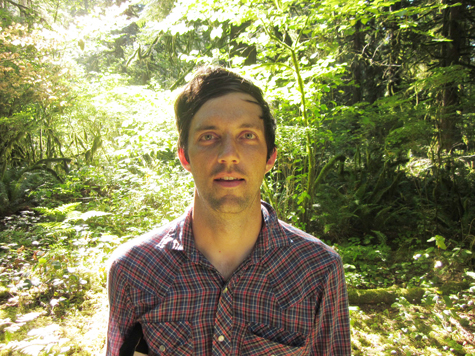 You’re likely at least a little familiar with Neal Morgan, even if the name doesn’t quite ring a bell right away. Fans of Joanna Newsom or Bill Callahan will recognize the name as belonging to the drummer responsible for holding down percussive duties on their respective tours the last few years, as well as on record–notably Newsom’s Have One on Me, and Callahan’s Apocalypse. But Neal Morgan, the solo artist, is something of an anomalous alter-ego to the drummer heard on those recordings. His 2009 debut solo record, To the Breathing World, premiered a symbiosis of voice-and-drums-only compositions, created largely from first impulses to a cassette boom box in his Portland, Ore., garage. The result was a unique, primal offering of polyphonic voice melodies cooing over sometimes-frantic, sometimes-structured drumming. For his newest album, In the Yard, Morgan has also added a spoken word element, a new passion he hopes his work evolves naturally toward.

The self-released In the Yard is out Jan. 24, 2012, with distribution help by Drag City. Morgan is returning to the Sacramento area on the heels of the release, and took some time to speak with Submerge regarding his muses, his music and his hatred of poetry.

Is there anything special about getting into the mindset of making a solo record for you, as opposed to your more regular gig of drumming for other people and being part of a unit?
Well, everything I do is based on first impulses. So even arrangements I’ve made for Bill’s music or Joanna’s music start as first impulses and then it goes from there. But those first impulses when I’m arranging for someone’s record are based on some amount of conversation in advance–what they might be hearing for a particular piece and talking about the piece itself, and then arranging for that. I guess having a blank slate is the major difference.

What draws you to want to create on that impulse, and to have the final product be a really improvisational vibe?
For my own artistic enjoyment, it’s most fun to just be playing and just to do it without thinking too much and editing while I’m working. I tend to like listening to records where it was clearly the first pass that someone made at something. I always love my friends’ demos more than their records, for example. Really early on, I didn’t know how to make music of my own. I thought, “Well you make some demos and then you make a record.” Why make demos? Just make it. Get in the garage and just start and end up in something. Not always, but most of the time I love the thing that happens first, when I wasn’t thinking, the fresh impulse. But after a certain point, I’m a heavy, heavy editor. I spend 20 percent of the time tracking and then 80 percent editing. It definitely flips; it goes from being this impulsive thing into this heavy cerebral experience.

Of the songs that aren’t improvised like “Father’s Day” or “The Evidence,” how do you reconcile getting into the mindset of arranging or composing those songs that are more structured?
Sometimes the first thing you did is just exactly what it needs to be. Sometimes that’s just what happens. There’s a need for further tracking and re-recording of initial impulses. There are a few moments like that on this album, like “Father’s Day” happened fairly quickly. Those initial impulses really just kind of happened. But there are a couple songs on the second side, one in particular–“Thinking Big”–I’d had that drum beat kicking around for a really long time. I decided I wanted to make a highly structured composition. But then the two spoken word pieces [“On Tour,” “I Stand on a Roof”] happened after I thought the record was done. I went away [on the summer 2011 Bill Callahan tour] and came back, and [the record] was very clearly not done with fresh ears. I recorded those in 20 or 30 minutes. It was exactly what the record needed, and I finished it right then.

Sometimes you have to take a step back and give it space…
Yeah. Do you know the painter Philip Guston at all? There’s a response on the record to him, and his painting is on the cover. I think about him a lot and read a lot of his writings and interviews. He talks about being led during the course of painting, and I think that happens. As these things start to show themselves, they kind of tell you which way to go.

What is your recording process like? I read you recorded some of the album on a boom box.
I have a cassette eight-track, and an old boom box that has a microphone. I have a digital program, but I’m not good at any of that stuff. I just wanna hit record and play. Side A [of In the Yard] is really a foreshadowing of what the next record is going to be. Side B is really a wrapping up, I think, of a lot of the ideas that started with the first album. The next one’s gonna be spoken word.

You mentioned you hadn’t really done any spoken word before. How did you get into that?
[I was] in Atlanta [with Bill Callahan], and I was opening the show there. I had just written something that I really liked, but I didn’t really have a melody or anything like that to sing it. I decided just to say it. I just tried it and I loved it.

Was it liberating? It takes a lot of confidence to release music that’s based on first impulses, but also to speak naked words that aren’t under the veil of a melody and just saying it.
Yes, it did feel that way. I think that maybe that’s what continues to draw me to spoken pieces. The next record will be that, because you’re right–it’s the barest of the bare. That show, for me, was an incredible show. My shows are almost always improv. I’ll just decide to play a song at the drum kit one night, or instead I’ll just sing that song. This was a night where I did four or five really new things that I’d never done.

What topics interest you most to write lyrics or spoken word pieces about? Is that also coming from an impulsive source?
I have a notebook, and I’m often writing. You write when an idea comes or something happens that you think is interesting, or you come upon a way to express something that you’ve been curious about. I do a lot of writing and no editing as I’m writing. Zero. I think that’s so important. Then I will look at it some time later, and sometimes nothing resonates for me so I don’t act on any of it. But sometimes pieces of it will resonate and will connect to other ideas I have at the moment. Maybe drum ideas, or they’ll connect to other things I’ve written. Now my process includes speaking those written words in the editing process, because I’m now thinking that way for live and for the next record–hearing how it sounds and seeing how it feels to speak particular lines and then making editing adjustments based on that.

Like working on cadence and intonation?
Yeah, which is all stuff that I’d never really explored before. But it’s all very rewarding for me right now. I also don’t have a lot of frames of reference necessarily, and I want to stay that way.

In terms of spoken word artists?
Yeah, and just for the written word. I don’t have a lot of writers who are heroes of mine in that form. I’m kind of limited in that way.

You haven’t gravitated toward spoken word artists, now that you really enjoy it artistically for yourself?
No, I haven’t done that. I’ve read some more poetry in the past year, but I like so little of it. It’s really wild. But I also don’t devour it. If I read a lot more, I’m sure I would find a lot more I would like. But I really hate a lot of what friends have given me and said, “Oh yeah, this is a great poet, a great book.” I just don’t like it, like 90 percent of it [laughs]. When I’m working on music, I tend to not want to hear much at all. I just want to keep those first impulses what they are without having other ideas flying around.

Neal Morgan performs at the Milk Gallery in Sacramento, Friday, Jan. 27, 2012. The show is all-ages and has a $5 cover. Show starts at 8 p.m. Morgan will also play at the Haven Underground in Nevada City Saturday, Jan. 28, 2012 (also a $5 cover). For more info, go to Havenunderground.org. Both shows feature Aaron Ross opening.