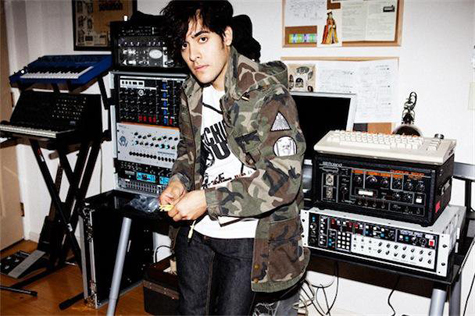 Many people aren’t awake at 4 a.m., unless they work a graveyard shift or are still stumbling around after a night of heavy drinking. But before the crack of dawn, Alan Palomo has “crazy, sleepless, caffeine, adrenaline fueled” music sessions. He is busy recording his sophomore album as Neon Indian, while an ample supply of green tea, cigarettes and synthesizers keeps him awake.

“You’ve ever been so tired you think you just heard somebody say your name or you just hear a random sound that wasn’t really there?” Palomo asked. “Your mind starts playing tricks with you and I realized that if you do that long enough and you close your eyes, you literally start to conceptualize these sounds. I like working that way because it takes you to that place.”

Palomo’s seen his late night music jams go from his bedroom to concert venues around the world. Shortly after releasing Psychic Chasms in 2009, he did not expect to receive a huge response from music fans and critics everywhere. However, Neon Indian was named “Best New Music” and ranked Psychic Chasms No. 14 on Pitchfork.com’s “Top 50 Albums of 2009” and was called one of the “Best New Bands of 2010” by Rolling Stone. This past March, Palomo found himself doing what he does best in the early mornings to record a four-song EP with The Flaming Lips.

“We went into it with no particular template set, then it came together in such a nice way. It was definitely a lot of random 4 a.m. nonsense,” Palomo said with a laugh. “And these meditative walls of noise that would just go on all night.”

Originally from Texas, Palomo formerly released music under the name VEGA and was an ex-band member of Ghosthustler before becoming known as Neon Indian. He anticipates the release of his second album in September. “It’s good to be able to put the last little strokes before putting it to bed,” Palomo said. “And finally having this album see the light of day. It’s pretty incredible.”

Many people like to claim his music as one specific genre, such as chill-wave, pop, electronic and even easy listening. But instead of categorizing his music, Palomo tries to leave a sense of mystery in his music to let the listener’s imagination take flight. “There is a beauty to the sort of sonic ambiguity,” said Palomo. “You don’t know exactly what you like about it but overall it creates an effect.”

Submerge caught up with the man of mystery over the phone after he was working on the finishing touches for his next record.

Your first record was pretty much just you and your laptop. Can we expect the same for the second album?
I was definitely hit with that option of just doing another bedroom record. To me, Psychic Chasms is perfectly representative of what was available to me at the time. It was just like, how much can you get out of one synthesizer, a laptop, and a couple of random effects? This one, the location has changed, the circumstances have changed, and the sound has changed too. I have developed a philosophy that I never want to write the same record twice. I always want it to make it feel like the perfect little snapshot of where I am in this particular point in time. And that’s exactly what this record is feeling like.

During the ‘70s and ‘80s your dad was a Mexican pop singer. When you were watching your dad as a kid did you always know you wanted to make music?
Oddly enough growing up, I related a little bit more at least creatively to my mom, who was a film buff. I really wanted to explore that medium at least in whichever way seemed available at the time. In a strange way, writing an album or a collection of songs always sort of feels like filmmaking in that sense. It’s sort of looking at it as one complete concept. It’s like a series of moments or narratives that’s all kind of meant to explain one idea and then move on to the next. That’s sort of the whole foundation of Neon Indian is that there’s not really a template or a way in which it’s supposed to sound, you can always expect it to be its own individual thing every time I do it.

How do you normally get the creative juices flowing when writing music?
I think it takes a lot of cigarettes and for it to be pretty late at night. I have to really create an environment and sort of state of mind to just allow ideas to tumble out. If I’m in a good place, I can finish a song at night, but if it’s just something that I’m forcefully doing, then it’s just like this long grueling process. It happens over the course of several days. I don’t really know. I’m still trying to figure out what exactly it is that puts me in that sort of happy place, so to speak. But when it’s there, I definitely like it.

How did you first fall in love with synthesizers?
I think there was this one keyboard at this pawn shop in San Antonio, Texas, called Krazy Kat Music. It ended up being this thing called the Oberheim OB-X, and I just saw it there. As soon as I flipped it on and just hit the first note, I was overwhelmed at these sensations of childhood and lot of the pop music that I grew up listening to. I think these instruments really do have a way of making these sounds that can create a time and a place or a context, almost out of thin air. I think ever since then, I’ve gotten progressively more and more obsessed.

How was playing on Late Night with Jimmy Fallon?
Very, very surreal. When we were asked to do it, it was literally two days before because, I guess, Kings of Convenience had dropped out. It was a pretty bizarre experience and it ended up being one of the coolest moments of my life. It’s so weird; I don’t really remember it. As soon as [Jimmy Fallon] was holding the record and said our name everything got really slow, and I kind of blacked out. When I look back at it and watch the video, it’s really strange. It’s like I wasn’t even there.

I hate to bring up bad memories but last time you were in Sacramento, there was a little incident with someone stealing your sound equipment. Did you get any of that back?
No unfortunately not. It’s kind of a bummer because the synthesizer that I wrote my first record on is still just out there somewhere. Somebody parked in the wrong hotel parking garage and the next day there was a hole in the window and all of our shit was gone. It was a real damper given that was our first real extensive tour. It was kind of a whirlwind. I’m sure somewhere around Sacramento there’s a synthesizer. It was a signature series Prophet ‘08 synthesizer. It’s somewhat rare. If you turn it on and it has the sound from “Dead Beat Summer” [from Psychic Chasms], then you found it.