Ask Kevin Lee, lead singer of Silver Darling, about the band’s fast acclaim and he will tell you quite simply that it was unexpected. With their first full-length, Your Ghost Fits My Skin, released on Crossbill Records this month, Silver Darling has quickly become a popular band in Sacramento. With their natural ability to create powerful, soulful music along with Kevin Lee’s weary, intoxicating vocals, Your Ghost Fits My Skin has become a highly anticipated release. Though it was just a project that simply started out as two roommates playing guitar together, the band has progressed into a three piece whose musical diversity has allowed them to redefine the folk genre. Submerge recently spoke to Kevin about the band’s influences, plans and the new album.

How did Silver Darling begin?
Josh Ahlansberg and I were roommates when I first moved to Sacramento, and I was just learning guitar. It kind of just developed from there. It’s been a really natural progression the last couple of years. Our friend Jesse Phillips started playing with us. There was definitely a time, about two years ago when we started a more intense practice schedule. We just asked ourselves if we really wanted to do this, if we wanted to commit to it and we did.

Sacramento seems to have embraced you guys pretty quickly. You have such a solid fan base already.
A lot of people who come out to shows are our friends. I think more people are starting to come out. It still feels like it’s the beginning. We are just getting people together and playing music. Sacramento has been great to us. We love to play in Sacramento when there are places to play.

What’s your favorite venue to play in Sacramento?
A house. Our best shows have been at houses. We are playing at Harlow’s for the CD release show. We’re looking forward to that because it has such a great sound system. It’s unfortunate because even though house shows are fun and it provides so much, after a while you start feeling the music itself is degraded a bit. Sometimes it’s really appropriate and the party atmosphere is awesome, but when you listen in a really excellent sound room”¦ Some places are just designed to hear music. I wish there were more places like that here in Sacramento.

You recently won an award for best male vocalist in Sacramento. How did that feel to get such an award?
It was really unexpected. I think, any embrace that has happened, has happened quickly. I was really surprised by it. It was an honor, of course, just surprising. I just didn’t think we were on the radar out in Sacramento yet.

You list influences from Neil Young to The Roots on your Web page. It seems you guys have a diverse range of musical artists that you look up to.
As far as the diversity, I think it comes from people who just put everything into their music. Just taking Neil Young and The Roots as an example—to me, those are people that really put themselves completely into their music. I feel like The Roots and Neil Young never settle and they only put forth their best music. They are always working on something. They are those performers who you can just tell that they put everything into their music. Bill Withers is also another huge influence. Every single thing he made came from such a real place.

Your album, Your Ghost Fits My Skin is being released on Crossbill Records. How did your relationship with Crossbill come about?
Well, we absolutely adore working with Crossbill. I can’t imagine a better working relationship. When we first started out, we were looking for people with that same passion for music, and we sent Mike Leahy a message and asked him if he had any openings on his radio show in Davis. We went and played on the show and put a couple more shows together with him at the Cool Cat Gallery with The Cave Singers. It kind of developed from there and he called us up and said that he would like to do what he could to put out our first album. It’s just a beautiful working relationship. Mike is our friend. To have someone on a label that we can call anytime is a lot more than what most people get, so it’s wonderful.

Where did you record the album, and how long was the recording process?
We recorded at the Hangar. We had plans to record at some other places in order to get really into the atmosphere where we were recording—off onto the country and whatnot. But as soon as we started working with Christian Kiefer, it just became obvious that it was not going to be feasible. We were not going to be able to bring out pianos and pump organs to a barn you know? It was becoming too big. We booked four days at the Hangar and we just practiced a lot. The Hangar is amazing and we can’t imagine now not recording at the Hangar.

You finished recording the entire album in four days?
We recorded the whole album in three days and started post-production on the last day. Kiefer also worked for about three days by himself on the mixing and the editing.

For new listeners who may not have heard the album yet, how would you describe it?
It’s the album that we definitely wanted to make. I think there are elements of folk, country and bluegrass. I also think there are singer/songwriter techniques. It’s a moody album but it’s not a storytelling album. It describes life experiences but not in a typical storytelling way. Rather, it describes more of how those experiences felt instead of explaining what actually happened. A lot of the songs don’t really bother getting to the results of what’s going on, just the moment of what’s happening.

That’s a really interesting approach to songwriting”¦revealing more of the emotional aspect of the experience rather than the actual experience. The title of the album is really interesting as well. Do you mind explaining it or would you rather not?
No, of course. I think Your Ghost Fits My Skin talks about the real stuff, about what’s really happening in life. I think it talks about the potential of people and the potential for life.

As a songwriter, do you feel that your life experiences makes up most of your lyrical content?
I tend to focus more on the heavier aspects of life. There are different phases throughout this album. I am influenced by things my friends are going through, and what I am going through. At first listen to this album I think there is a lot of darkness, but I try to inject a lot of hope and excitement over change. The second song on the album addresses that straightforward…that moment of change. The point where you are missing where you were but you are walking toward something better. I mean, those are the best moments in life for sure.

What are your plans for the band?
We are releasing the album and playing three different CD release shows. We are having all the musicians that played on the album play with us for those shows, so we are going to have a lot of people on stage. Then we are going to be going up to Arcata and probably going to Seattle and back at the beginning of the year. We are going to plan more shows. We are already starting to work on the next album as well. We are definitely just going to keep on going. 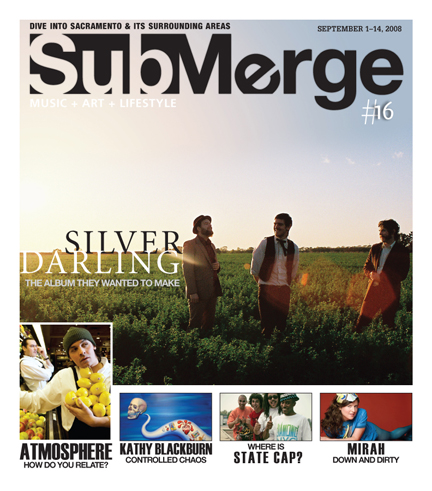