Photo above by Lindsey Byrnes

Pop punk isn’t dead. It’s just evolved, much like the bands themselves. New Found Glory’s new album, Resurrection, hits the mark between nostalgia and maturity, reminding fans why they started listening all those years ago.

Established in 1997 out of Coral Springs, Florida, New Found Glory (Jordan Pundik, vocals; Chad Gilbert, guitar; Ian Grushka, bass; and Cyrus Bolooki, drums) came into the scene when pop punk wasn’t quite a “thing” yet. They quickly gained a following and went from just another group of boys with guitars and a knack for storytelling to one of the most influential pop punk bands of that time period. Their teenage years were spent largely on the road, touring with their own musical idols like Blink-182 and Green Day.

Fast forward 17 years later and the guys are now in their 30s, some married, some with kids, still living out the dream of playing the music they love and getting paid to do it. And despite leaving behind their awkward teenage years long ago, New Found Glory still draws fans that are no older than they were when they got their start.

The band found a sweet spot in the pop punk scene with their emotionally charged, fast-paced sound that blends heartfelt pop lyrics with harder, more upbeat punk melodies. Younger fans appreciate their straightforward lyrics and relatable songs about the politics of relationships, including losing the girl, not getting the girl, and realizing the girl wasn’t so great after all. The band also sustains their longtime fans who can’t resist the guilty pleasure of a nostalgic ride into the days of teenage heartache and rebelling against…pretty much everything.

Like any resourceful pop punk band, New Found Glory is skilled at turning heartache and loss into the fuel that powers their creative process. Their eighth studio album, released on Oct. 7, 2014 through Hopeless Records, showcases a more mature take on overcoming hardship and coming out stronger in the end. Appropriately titled Resurrection, the album is a response to many of the challenges the band has faced since their last release in 2011, including parting ways with lyricist and guitarist Steve Klein, one of the band’s founding members, and changing record labels.

The album makes a strong start with the single “Selfless,” an anthem that sets the tone for the overarching vibe of this album: we’re not going to let anything get us down. The theme of power and triumph and rising up after hard times is especially strong in the title track: “These troubled times / Awoke my strength / So watch my / Watch my resurrection.”

“One More Round” can only be assumed to refer to the endless scrutiny and criticism bands face, especially online: “You’re a kid from the future, you’re passive and you’re afraid, sound so bold when you’re on paper, crumble when face to face.” As a band with more than 15 years in the spotlight, this likely is their response to the ever-fickle fans and critics.

And what New Found Glory album would be complete without the “songs written about stupid girls” ballads? The last few songs of the album fall thematically into stories about exes and relationships that were doomed to fail. “Degenerate” is a bit of advice to girls who fall for the wrong type of boys, while “Angel” is a dark but honest take on a relationship that ended eight years ago—and now serves as lyrical inspiration: “I guess lashing out makes it easier, something to sing about just makes it easier.”

Lyrically, even the songs about love take a more mature view on relationships, emphasizing sticking it out rather than giving up. From “Vicious Love”: “I could have given up a thousand times. In the past that was so easy.”

The common thread throughout the 13 tracks on this album revolve around coming to terms with adult life and making the best of whatever is thrown at you. Musically, many of these tracks are right on par with much-loved singles from Sticks and Stones and Catalyst, which will certainly be appreciated by fans from their early days.

Submerge got in touch with singer Jordan Pundik just before New Found Glory’s upcoming Sacramento show at Ace of Spades to hear a little more about the new album and how they’ve grown and matured over the years. 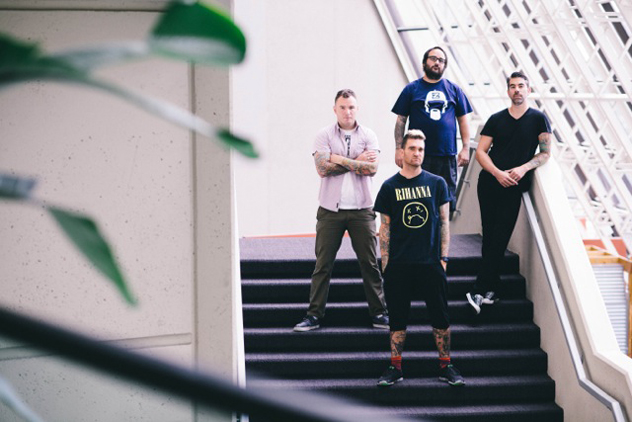 The new album has definitely matured lyrically but overall it sounds very characteristic of New Found Glory. How has your music changed as you gained more life experiences and stories and what have you tried to keep the same?
I think we’re definitely more self aware, being older. When you’re young and on tour and on the road it’s like a fantasy world at times. Now that we’re older, a couple of us have kids, are married, or divorced and remarried. But we’ve always been a band to write about life experience, the human experience, and that’s where it stands now.

What kind of themes are you exploring that you haven’t really touched on before?
There’s a couple of relationship songs—we’ve always been a band to write about that—but it’s not like, oh I love this person, we broke up. It’s more like, we’ve been together for a while and we’ve been through some really rough shit and we make it through—or we don’t.
And then there are the other songs on the record about dealing with things that are sort of shitty in your life that knock you down, and it’s more about coming out of those things and becoming stronger from it.

Your fans are still a younger demographic. How are you getting younger fans to connect with the music?
I think it’s definitely writing about real things. I think people can connect with that. We’re not trying to hold ourselves higher than anybody else. And I think it has to do with the bands we take on tour and with our live shows—we don’t just stand around. We have a lot of energy.

You came into the scene when pop punk wasn’t so big. What trends have you noticed and how have things changed over the years?
I think it’s more the styles that bands are playing. Take The Wonder Years, for example. They’re a little bit not very polished and their lyrics are very heart-on-your-sleeve, and they’re more storytelling, and they are considered a love pop punk band in our scene.
Then you have bands like Wavves, and they’re super fuzzed out, write two-minute fun pop punk songs and people credit them as these indie masters, like at Coachella, but really at their core they’re a pop punk band. So I feel like there are different styles but it’s all kind of rooted in the same thing.

How have the crowds and your own fan base changed over the years?
There’s still always that dude in the back that started listening to us in ‘99 or 2000, the guys and girls that are hanging out in the back, singing along, but then in the front and in the pit you have a lot of young kids. And for some people that are just now getting into us, I think it’s really cool and says a lot to me that we’re still relevant.

Which songs do you still like to play from your earlier days?
I love playing more fast songs like “Understatement” and “All Downhill from Here.”

Are there any songs you really wish people would stop requesting?
“It Never Snows in Florida.”

What was it like being a teenager and seeing everything grow so quickly, gaining popularity doing what you loved?
That was before any of us were in relationships or had any big responsibilities, so we would be on tour 10 months out of the year. It’s crazy that most of my adult years were spent on tour. I only went to college for a semester, so I did a lot of my growing up on the road.

Did you guys get to do the normal high school type, teenage experiences?
I think we got to do it but on tour. Underage drinking, lighting shit on fire, blowing up port-a-potties…

So now that some of you have children, how has that changed your music or just the band dynamic?
Dynamically, we can kind of relate when we’re on tour together and gone for a few months. Not being able to see them is always hard and we have each other to talk to about that.
But even as far as just being in the band, now there’s a lot more at stake. As far as being able to sustain a life for them, this is what I do. It’s still as fun as ever, being on tour, recording records and meeting fans, and doing what we’ve always done, but it’s always in the back of my mind that there’s more at stake here.

So when do the kids get to start coming to shows and getting in the mosh pit?
My kids have been to the shows. They sit on the side of the stage and watch me.

Wow, they’re getting an early start.
They’re into it for a couple songs but then they want to get off the stage.

I imagine it’s harder now to find time to write and record as a group. What is the creative process like for writing the lyrics and creating the songs?
Especially with the new one, I was going up to Chad’s place—I live in San Diego and he lives in Los Angeles—at least once a week and writing with him in his kitchen. Once we finally had demos of songs that’s when we knew we were going to be recording and get everyone together.

That sounds much more collaborative than some bands I’ve talked to. Has it always been that way?
It’s always been a collaborative process. Obviously a song has to start somewhere, so someone will have a riff idea, or a melody idea, but then we get together and work it out.