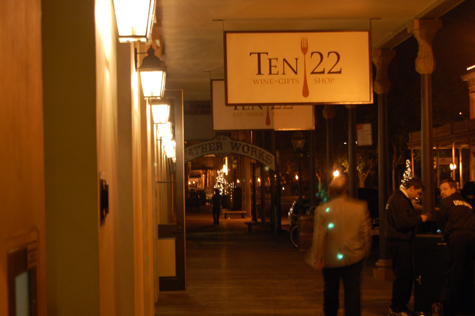 It seems as though restaurateur Terry Harvego has given the Firehouse Restaurant a brother, nurtured to life just a block away. It’s a well-equipped younger sibling, ready to follow in its big bro’s popular footsteps.

Ten22 was slated to open on the 22nd of the 10th month, but arrived post-mature (three-plus weeks after due date) to 1022 Second Street in Old Sacramento on Nov. 13.

This restaurant had intention from conception. It aspired to be one to “Eat, Drink, and Relax” in and was nicknamed thus on its nametag. And I indeed found myself eating, drinking and trying to relax in Ten22 on Thanksgiving Eve.

The open, almost-chic, barn-like space made dining feel grounded and like all the air might collect at the top, the way the mass of a button mushroom gathers at the head. There was a country-ish openness to the structure that was accented by the multiple large-windowed doors on the building’s edifice.

Something was familiar about this environmental sensation. I realized after visiting the wooded, lit bathroom that the feeling was similar to that evoked by restaurants in South Lake Tahoe—the shiny wood, the wide ceiling space and crowded base, the “adventurous” menu and the earth-toned dÃƒÂ©cor. It invited diners who’d enjoy South Lake Tahoe to enjoy it right here, in little old Sacramento.

The menu is suited for group grubbing with “shared plates” and family eating with kid-friendly dishes such as mini corn dogs and Rice Krispie-dusted salmon. The hungry, unaccompanied eater can be sated with an herb roasted half chicken; those lighter eaters have their choice of single portions like one pork slider.

Being with friends, I opted to share. We split three ways plates of Dungeness crab tater tots, brandy marinated beef skewers and the assorted bruschetta.

Crusty, doughy Bella Bru bread was a nice precursor to our sharing. But olive oil and vinegar sloshed easily over the top of the filled-to-the-brim, shell-shaped plate, making a mess of our table, napkins and clothes. Good intention, poor execution. Happens to the best.

It was like one, two, three as the shared plates arrived. Brandy marinated beef skewers ($8.95) were undoubtedly delish and the table favorite. Eight long, thin wooden skewers each lollipopped a small slice of yummy yum beef, served on a small hill of maple mashed sweet potatoes. The beef was tender, so sweet teriyaki-ed and flavorful with a grill-charred crunch. The potatoes were smoky and smooth. The menu said there was supposed to be a pomegranate-soy dipping sauce, but this was M.I.A. for us.

Next, we sampled the assorted bruschetta ($10.95). The six olive oil-crisped crostini came in flavor pairs: two salmon on crÃƒÂ¨me fraiche with dill, two with pulled pork and two with olive and tomato tapenade. With toppling piles of salmon and pulled pork on nearly iPhone-sized crostini, this dish was satisfying with agreeable size and flavor. The salmon seemed poached and wasn’t over or under seasoned. The pulled pork was legit. Nearly too tender and sweet, smoky with a creeping spice that smacked the back of the tongue like an obvious afterthought, it tasted pleasantly just like peppered teriyaki beef jerky (kind of comical, no?). The tapenade consisted of Kalamata olives, black olives, tomatoes and seemingly red bell pepper and was salty as expected.

Tater tots of any kind excite many a persons’ palate. And as an adult, crab tater tots seem divine. The Dungeness crab tater tots were served with pineapple and a spiced chili “glaze.” Unfortunately, the crunch and flavor of these frutti del mare were feeble and dull. Sure, you don’t want to out-spice the delicate flavor of crab, but the combination of sesame seed, mustard seed, spice and what seemed to be chervil was off. Pineapple, chili and crab may work, but not in this preparation. It didn’t taste bad, but perhaps not preferential for all.

Although Ten22 had a “selective priority,” as the bf said, concerning its attention to detail, it seemed as though details were well prioritized. I can do with an unstable table, a crammed dining area, cheap fabric or iffy booth positioning if it means fluted beer glasses, proper wine coolers, nice televisions, good service and palatable plates.

When making a new restaurant’s acquaintance, it’s important to not be too harsh or judgmental. (Remember when you were just a wee one, figuring out what was wrong or right, good or bad?) But you deserve it, Submerge-ists: the truth about whether or not a restaurant is a bad seed.

But like the mustard seeds waiting to be noticed in the crab tater tots, the lasting taste of Ten22 is unfamiliar; ergo, indecipherably good or bad. Trendy. Expectantly interesting. But perhaps comfortable.

I mean, Ten22 wasn’t conceived with the intent to outdo, shock, entertain or fancify food. With nicknames like “Eat,” “Drink” and “Relax,” what’s to be expected?

Shakespeare wrote in Romeo and Juliet, “What’s in a name? That which we call a rose by any other name would smell as sweet.” In the case of baby Ten22 it’s all about the name.