Creeping Death • Egyptology at 250 BPM with Karl Sanders of Nile 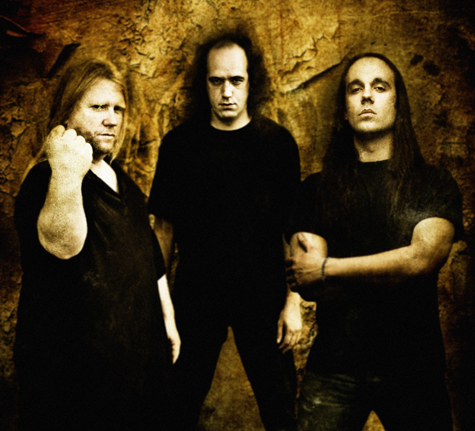 In my own bizzaro fantasy world, Nile frontman Karl Sanders is the kind of guy who would be featured in inspirational TV commercials during Saturday morning cartoons, the kind of guy parents want their kids to grow up to be. Here’s a guy who not only has a technical mastery of the electric guitar that borders on the absurd, but also an encyclopedic knowledge of Egyptian and ancient Middle Eastern history, mythology and culture that has provided over 15 years and six full-length albums’ worth of lyrical and thematic material for his band, Nile. And by material, I don’t mean a song or two, here and there talking about Pharaohs and Sun Gods and the typical heavy metal references; I mean, every song on every album, with titles such as “Papyrus Containing the Spell to Preserve Its Possessor Against Attacks from He Who Is in the Water” and “Chapter of Obeisance Before Giving Breath to the Inert One in the Presence of the Crescent Shaped Horns.” Even more atypical, at least in terms of the typical American ideal of “metal,” is Nile’s extremely technical, exceptionally brutal and almost impossibly rendered music. Sanders, alongside guitarist Dallas Toler-Wade and drummer George Kollias, play real hard, real fast. Nile doesn’t bother with hyper-speed; they go straight to ludicrous speed.

Alas, the Karl Sanders “The Library: Check it Out!” PSA is still a few years away, but Nile are nevertheless making significant headway in the music world. Their most recent effort, 2009’s Those Whom the Gods Detest charted on the Billboard Top 200 domestically, and the band is increasingly in demand internationally—the U.S. leg of their current headlining tour comes only after the band has taken their show to foreign lands, and will be followed directly by even more far-flung intercontinental touring. I caught up with a somewhat preoccupied Karl Sanders via phone from Baltimore as he prepared for the band’s first U.S. show of the new year. As the frontman and driving force behind one of the world’s most pissed bands, Karl Sanders is surprisingly congenial, the kind of guy you’d want to have breakfast with. Someday, Americans everywhere will know”¦

Is there a certain amount of physical training that you go through to get ready to play this kind of music live, or are you just used to it by now? I’d imagine it would get pretty physically grueling.
Your breathing definitely gets better, more conditioned the more you’re on tour, the amount of air that you’re able to process when you have to sing and play guitar and jump around and all that. There’s definitely some conditioning there.

So do you have any sort of workout routine?
Well I do Tae Kwon Do in my spare time, so that keeps me active.

[Though secretly wishing I could tell Karl it makes him over 9000 times more badass that he knows Tae Kwon Do, I don’t want to swing from his nuts too hard so I go with a stock question instead.]

This is your first U.S. tour with the new record. Are you excited to play the new songs?
You know it! We introduced these songs on the European leg of this tour and now we get to bring them to an American audience. It’s gonna be lots of fun.

[It’s worth noting that the songs Karl is saying, with the utmost sincerity and genuine excitement, are “gonna be lots of fun” to play live include “Permitting the Noble Dead to Descend to the Underworld” and “Utterances of the Crawling Dead.”]

Your new record, Those Whom the Gods Detest, charted on the Billboard 200 top-selling albums chart the week it came out. That has to be a good feeling, sort of a feather in the cap.
[Laughing] Well I don’t care so much about feathers in the cap, but the fans dig it; people coming to the shows seem to like the new songs so I think it’s all good.

But for the style of music your guys play, it has to be sort of unexpected to find that sort of semi-mainstream acceptance.
Oh yeah. When we first started we didn’t expect this level of success. We were just playing this music because we loved it.

Is it still as fun now as it was then?
Well it’s fun in different ways, I mean, as you grow as a band and get lots of experience touring and making records, the experience deepens and changes, becomes richer. But you sure can’t beat those first few years. The excitement level was untouchable. I think a little progression is certainly natural; you can’t help but grow and learn as you go along. But I feel that we’re basically still doing the same music we started out doing 15 years ago.

I see that with Those Whom the Gods Detest you’ve gone back to including explanations and sourcing for your lyrics in the liner notes, which you didn’t do on your last record, Ithyphallic. Was that by popular demand?
Yeah, people were disappointed that I didn’t, but at that point in time I just didn’t want to do them. But this time it was fun again, and I enjoyed it. I think it’s something special for the fans, something extra.

I read on your Myspace blog that you’ve been offering guitar lessons before shows on your tours. Where did that idea come from?
Well that was basically born out of the fact that between decreasing CD sales because of downloading and increasing Internet piracy, I needed a way to increase my income a little bit, while maybe at the same time, sharing some guitar stuff with the younger generation of guitar players. I think that’s a win-win all around.

Have you had any “interesting” experiences with the lessons so far?
There’s no craziness involved. I mean, these are just guys who want to learn guitar, and metal, so it’s all positive stuff. It’s not like the crazy fan stories you get from the regular aspect of touring where all kinds of wild and stupid shit happens. These are guys who are serious about guitar playing, serious enough that they’re willing to shell out $100.

[As I was about to follow up with Karl about the kind of “wild and stupid shit” that happens on a Nile tour, which doubtlessly involves the kinds of badassery known only to a chosen few, the tour manager came on the line and told me to wrap it up.]

So what’s on your itinerary after this current tour?
Well, we got on the menu, upcoming: Australia, New Zealand, Hong Kong, Shanghai, Beijing, Tokyo, a bunch of other stuff”¦we’re talking about India this year. We also have, upcoming, Mexico, Colombia, Brazil, Chile, Venezuela. We have a personal date with Hugo Chavez.

What do you think it is about Nile that has lent to such worldwide acceptance and success?
Metal is a universal language, it’s universally understood. 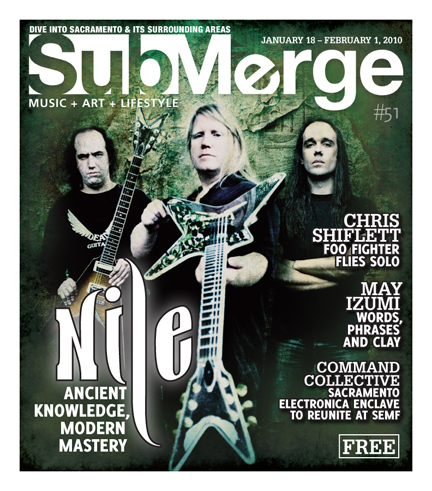 Nile unleashed its earth-splitting metal at the Boardwalk in Orangevale on Jan. 28, 2010 alongside Immolation.