After a series of changes, NMBRSTTN finds a new direction with new EP, Energy and Entropy

You never realize how much you don’t like loud motorcycles until you are trying to listen to a recording of an interview you did through a phone speaker. You may find yourself resenting the fact that people need to drive vehicles that are so unnecessarily loud.

Prior to this, I sat down with Barry Crider and Ean Clevenger from NMBRSTTN (Number Station) at House of Hits, relishing in the quiet and climate-controlled environment. Luckily, our bands tend to practice on the same days, so finding them was only a matter of Counting Hallways to the Left.

Clevenger (vocals/keyboard) and Crider (guitar) are growing into the band as a new beast after a series of member changes over the past several years. Clevenger has been a mainstay in the Sacramento-area punk scene, touring and playing in bands for nigh on 20 years, most notably in local bands Dance for Destruction and Pipedown.

The band has been busy; just finishing a new music video, acquiring management and securing a spot in Eugene, Oregon-based label Flossless Audio’s catalog of releases. On the heels of releasing a new EP entitled Energy and Entropy, the band is embarking upon a West Coast tour this week.

This new release rides dark and heavy with definite nods in a dark-wave direction. Fans of Haunted Horses, Have a Nice Life and even earlier AFI may find something remarkable in Energy and Entropy. Clevenger tends to paint a dystopian lyrical-landscape over endlessly eerie, delay-drenched, fuzz-decayed guitar. The vocal melodies stand in stark, airy contrast to bass lines that rattle and clamor over steady-smashing snare hits and bright synth swells. The vocal melodies are catchy and memorable, something I wasn’t expecting really for a dark punk band. It is at once abrasive and pop-oriented.

Admittedly influenced by bands like The Cure and Depeche Mode, Energy and Entropy sits comfortably among other titles on your album shelf by bands like Slowdive and My Bloody Valentine.

The band has seen multiple members come and go, but the current lineup seems to instill confidence and signal a rebirth to both Clevenger and Crider. The new EP is a result of that union. The record was recorded in Rocklin at Earth Tone Studios by recording engineer Pat Hills, also of punk band Bastards of Young.

Ean, in terms of the lyrics, what do you tend to focus on?
Ean Clevenger: When I write the songs, I sort of hone in on the lyrical concept, kind of get a feel for the music, the idea, so it works together.
Barry Crider: Either Ean will come with riffs done or a general chord structure, and I’ll take that and kind of do it in my own way, where it’s using my playing sensibilities, or make it fit kind of like what I hear in my head, or I’ll come with my own riffs and see if we can patch something together, and see how it works with the previous structure we were working on.

Were there any bands specifically that influenced your writing for guitar for this EP?
BC: The big three ‘90s shoegaze bands. I got really into that, and like Catherine Wheel, and I was kind of looking at the way the more modern guys were playing shoegaze. I was listening to Whirr and Deafheaven, and how they use these features like blend and wash, and integrating these chordal structures from bands like The Cure and Depeche Mode with these new ways, for me at least, at playing guitar, that had a lot of influence at how I came at playing parts, but mostly Ean and I did it together.

So you guys, together, kind of create the song structures and bring it to the band?
EC: Yeah, I mean, that’s pretty much how it goes … I would say both of us are on a mostly equal playing platforms.
BC: Yeah we’re still trying to work it out.
EC: However, lyrically, to go back and touch on what you said before, with every project that I do, just the way that I am, I always tend to write stuff that at least creates some sort of awareness whether it’s about ourselves or the way that ourself works its way into a societal variable, or to make people aware of their actions. I mean, this is a really ambiguous way to try to state that my lyrics are philosophical and politically intended. Most of what I’m writing about these days is sort of about making people aware of the effects of technology on our society today, and what negative consequences might come out of that over the next 40 years, 50 years, and how to be conscious how we’re being involved in these worlds where smartphones drive our intelligence rather than us as human beings that sort of deal with each other.

So your band kind of exists on the edge of having a disdain for technology and but definitely relying on its usefulness …
EC: Yeah, I’m not like a primitivist. I don’t think I ever expect us all to reject [technology] entirely … but I think that technology will backtrack. I mean, nature is the great equalizer. It doesn’t matter if you’re the most powerful elite or the poorest person, nature is going to determine what happens to us.
I mean, the power elite, which is really in control of the technology, and how technology is brought into our culture and our society, from now until the future … Technology can be a positive, but we allow the elite to control the technology and input it into a culture in a way that is only profit-seeking; that’s the alarm bell; that’s the canary in the cave, you know? We need to watch out for that, because the rich are aware that nature is the great equalizer, and if they can help find a way for us to keep on ignoring it, they’ll find a way to master it and then master us.

With the exception of your delay pedal, and guitar, what is one piece of gear that you can’t live without?
BC: I would say the fuzz is the most vital piece.

What kind of fuzz are you using?
BC: Right now I’m using this fuzz by Retro Mechanical Labs up in Portland. He’s just this builder that makes these cool fuzzes that look like they came out of the A-bomb era. They have VU meters, and it goes from totally like anywhere on the range from like Big Muff to like full on doom, destruction fuzz that sounds like your speakers are ripping out of your amp, so I picked that up and that’s been my most valuable pedal, that’s the one I touch the most.

What are you guys doing next as a band?
BC: I want to write.
EC: Yeah, full-length time.
BC: I feel like were accessing the vision of what we’re trying to accomplish with this EP, but I feel like with a full LP, we’ll have a chance to really breathe and flesh out what we’re trying to say musically and lyrically I think.
EC: I do too.
BC: It’ll give a chance to really explore, not only texture, and dynamics …
EC: And song compositions. I mean, it really is like we are a new band. Although we’ve been a band for three or four years, we’ve really just completely restarted the band, almost in a way, so we’re almost finding our identity again. 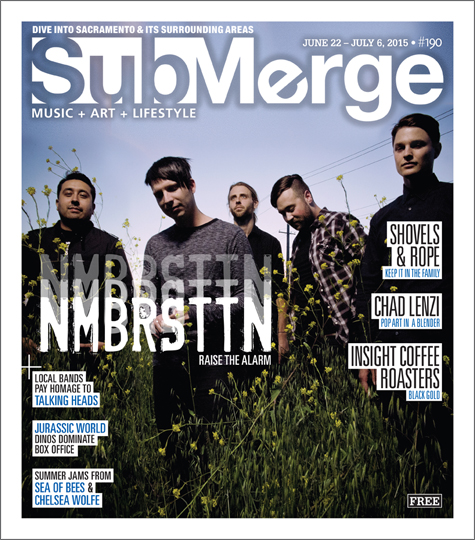 NMBRSTTN are playing an EP release show on July 13, 2015 with Seattle’s Nostalgist, Fifi and Color of Closure at The Press Club. This is a 21-and-over show and will start at 8 p.m. For more info, go to Facebook.com/thepressclub.