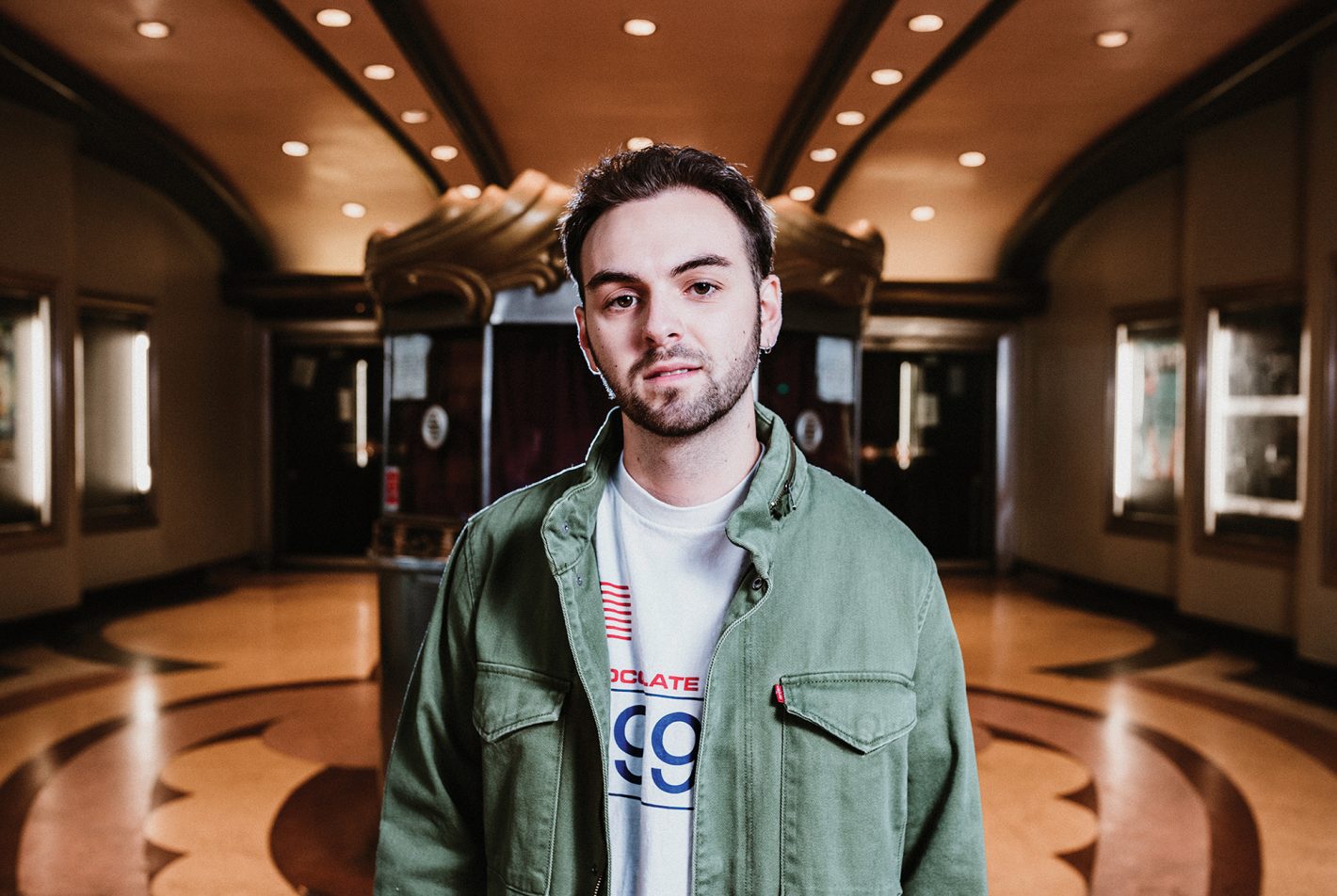 The term noir is typically used to categorize retro crime films with a black and white visual style. We’re most familiar with the aesthetic of these films, but what entices us are the authentic and grim storylines and how the characters are affected. For pop renegade Noirre, we’re familiar with his sound: upbeat electronic pop music highlighted by melodic hooks; but what draws us closer are the stylistic variations to this typically uniform genre and the personal subject matter of his music. Although it may be difficult making sense of this world at times, the young artist is slowly finding comfort in the grayscale of life through his art.

Noirre, real name Devon Murray, began his music career at age 15, recording his first album Nite Tales, eventually releasing it when he turned 17. Born in Rocklin, California, Noirre comes from an artsy family; however, he’s a self-taught musician. He first gained traction in the music industry when a Tower Records owner in Japan contacted him with the intention of buying physical copies of Nite Tales. So, 10,000 copies and a couple hundred cardboard cutouts later, Noirre had established a global audience before he could legally buy a lottery ticket. That was in 2014; a year later, he released Nostalgia, expanding upon his diverse sound. While he may have coached himself through the first portion of his career, the story wouldn’t be complete without mentioning a unique cast of musically inclined characters.

His fellow band mates, The Usual Haunts, are an unusual group of friends. Following the release of Nostalgia in 2015, Noirre recorded Living is Easy with The Usual Haunts and released the album in 2016. This album has more of a Grateful Dead indie jam band feel to it. The music is groovy, the artists are talented, but the unique element that made Noirre a hit in Japan was lacking.

Around the time that Living is Easy was recorded, Noirre and The Usual Haunts rented out a house known as “Spirit House” to establish a community for artists around the Rocklin area. With the new house, graphic designers, musicians, painters, fashion artists and many other types of creative’s were free to live together, make art and empower each other to challenge the status quo. For a group of friends growing up in the suburbs, this was a place to “leave town without leaving town,” as Noirre explained.

“You want to paint a place like that as perfect, but every place has its own issues,” he continued when discussing his hometown. From an early age, he knew that something was unusual about his own perspective in an area like this.

“We’re a bunch of kids from the suburbs who shouldn’t know what we know. We brought ourselves to the fire and tried to burn off the fat,” Noirre said about his childhood.

The metaphorical fat: the lack of individualism in a town like Rocklin, one typically depicted as a “safe and nurturing” place for families, but a town with a sheltered outlook on life.

Noirre met CJ Caffrey, The Usual Haunts’ lead guitarist, when he was looking for a band to tour with in high school. “He’s a total wallflower … but I saw something in him … He was wearing a Ramones T-shirt, so I thought that was cool, and he could just play, and he adds a little something different,” Noirre said about the first official band mate. After securing Caffrey as a member, Noirre searched Twitter for another artist, leading him to find Dustin (Dusty) Soares, the first person that he found with a guitar as his profile picture. In a simple yet fateful decision, Soares introduced Noirre to the group’s future drummer, Noah Corbitt. The band was now official and the “Spirit House” would be ground zero for a new style of music that combined the spirit of punk and jazz rebelliousness with the hooks and melodies of popular music.

However, coming from a punk and jazz background made this a difficult transition, and during this time, Noirre experienced an existential crisis around the essence of his music. The Usual Haunts was a way to get away from the “pop” sound that he felt lacked depth. But this was a superficial ideal, one that came from the type of thinking that the “Spirit House” fought so hard to overcome. It was difficult, but he finally came to terms with this new sound.

“Tide rises all boats,” he said when talking about the mutual relationship he has developed with The Usual Haunts. They do what they do best: jam out and perfect the craft. Noirre can be the man behind the dials, turning switches to create an authentic brand of music. This evolution in thought led to his most recent album, Chroma.

Released in 2018, Chroma bookmarks the maturity that Noirre has gained in his music. The sound is more pop-like, but the content isn’t typically popular. Some parts of the album feel like a therapeutic session with the empathetic vocalist. “Freedom flying in my soul, diamond on my nose, Lucy in my bones, fuck where I’m at,” he sings, a new mantra for the Rocklin-born musician.

From a strictly musical perspective, the album is an introspective yet catchy work of art. The album is segmented into three chapters, split by variations of the title track. The first rendition, only 83 seconds in length, is a quick hit of a house-driven sound with a simple melody to level out our musical dose. The album continues with “She” and “Holy Grail”—the more popular tracks to ease the listener into his world. By the time “Chroma 2” hits, the album pivots into a semi-conscious, dream-like state. The hook is the same, but we slowly get pulled further into the album. By the end, “Chroma 3” fully immerses the listener into his subconscious. The song is longer, slower, but just as compelling as the first two versions.

Noirre described this album as a “healing process … an awakening.” Keeping in step with his love for symbolism, the artwork for Chroma—NASCAR-themed font and colors—depicts the feeling you get when listening to the album, racing through his feelings from song to song with a colorful vehicle for music and a man at the wheel driving our thoughts. “It’s ironic, because it’s the most pop thing [I’ve made], but it’s so releasing for me,” Noirre said about Chroma.

The path to success doesn’t come without challenges, though, as Noirre is quickly realizing. Most of the feedback on his music has been positive, but the negative sentiment is slowly surfacing. It’s never easy to be criticized, especially over something as personal as music, but he’s getting used to it.

Pinpointing his audience is another challenge for the young artist. As an artist who crosses multiple genres, he never knows what to expect at shows. At a show earlier in his career at a Rocklin coffee shop, “kids were dancing on tables,” but when Living Is Easy came out, they saw more “cool kids with their arms crossed in the back.” But this, like many things he’s faced in his life, is but a minor challenge for a man who has found comfort in his art.

“I didn’t know what I was … All I knew that was black and white, was my music … my art,” he said, explaining the reason behind picking Noirre as his moniker.

In life, not much makes sense to us, but when you find something that does make sense, you tend to gravitate toward it. Noirre didn’t just shift towards his art, but immersed himself in it, and in turn, is bringing his listeners in closer for a deep look into his thoughts and dreams. His personal film is just beginning. The plot is slowly taking shape. We’re familiar with the format, we’re even familiar with the main character at this point; but what lies ahead is the unknown—a liberating notion for an artist from Rocklin who’s found solace in his craft.

Help Noirre celebrate the release of his new album, Chroma, live at Holy Diver (1517 21st St., Sacramento) on Oct. 11, 2018. The Usual Haunts, a guest DJ and a Stellar Brand Pop-up Shop will also be on-hand. This all-ages show starts at 7 p.m., and tickets can be purchased through Holydiversac.com.