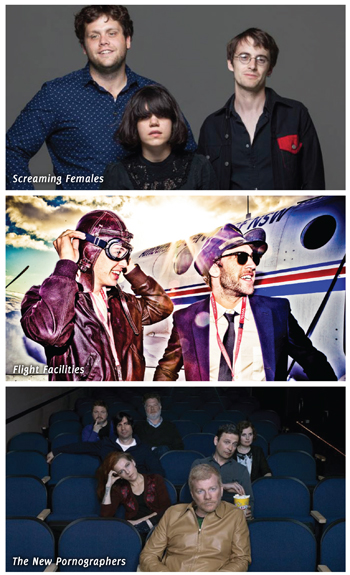 If you’re heading to The City by the Bay any time between Feb. 20 and March 1, 2015, chances are you’ll encounter some of the radness that is Noise Pop! Easily one of the best festivals on the West Coast, Noise Pop throws amazing events all around San Francisco for over a week, bringing together eclectic musicians, artists, filmmakers and more. Some of the more sought-after shows are already sold out (Caribou for two nights at The Fillmore, Best Coast at Bottom of the Hill, Surfer Blood at Rickshaw Stop, Jim Adkins of Jimmy Eat World at Swedish American Hall, all sold out already), but tickets are still available for tons of rad stuff, like the official Noise Pop Pre-party on Thursday, Feb. 19 at California Academy of Sciences with a DJ set by Allan Wilson from Sacto faves !!! (Chk Chk Chk), as well as Dawn Golden and Awesome Tapes from Africa. If you act fast, you can also still get in to see the amazing New Brunswick, New Jersey rock band Screaming Females’ West Coast album release show at Hemlock Tavern on Saturday, Feb. 21; Flight Facilities and Touch Sensitive on Tuesday, Feb. 24 at The Regency Ballroom; Craft Spells on Feb. 25 at Great American Music Hall; Geographer and K Flay on Feb. 27 at Fox Theater; and The New Pornographers on Feb. 28, also at Fox Theater. Visit Noisepop.com/2015 to view all events, buy tickets ahead of time and plan your Noise Pop schedule.