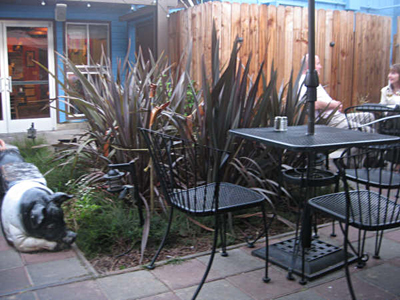 It was a picturesque summer evening. The sun had just gone down and a mild breeze moved about the quaint patio in the rear of Dad’s Kitchen. At the 8 o’clock hour, the 10 black tables that angled along large gray tiles were filled with couples and families, stuffed happily and enjoying the seclusion of what seemed like a backyard get together at an old friend’s house.

For owners Zac and Ali England, it seems like that’s the point. Dad’s is comfort food at its finest, offering patrons a home away from home where they can relax and enjoy some great cooking, a to-the-point alcohol selection and staff members that, if you were so inclined, could be your new best friends—or bandmates, for that matter, since members of the wait staff and kitchen also happen to be local musicians. In fact, when I arrived on a Tuesday night, an open mic night had just gotten under way. If you show up and realize you didn’t get the memo, don’t fret. An array of musical instruments including a guitar, banjo and mandolin are mounted on the wall and can be taken down for a pick or a strum. In fact, it’s encouraged.

Dad’s also carries offerings from Two Rivers Cider, a local brewery that embraces a classic approach to making hard apple cider, crafting it to be dry and crisp—reminiscent of a chardonnay. In addition to the apple, Two Rivers brews up seasonal ciders that will spark true romance in your mouth. Dad’s currently serves their blood orange cider that I’m convinced glows in the dark; the beverage is an electric shade of neon fuchsia. Naturally, I ordered one to start out the evening and my friend who accompanied me ordered a Monkey Knife Fight, an India pale ale that local brewery Rubicon produces. Tapping into the local community for alcohol as well as fresh produce and meats is an important facet of Dad’s that the restaurant proudly wears on its sleeve.

We clanked our glasses and set out on our culinary journey by ordering a starter of Dad’s infamous mac ‘n’ cheese, a menu staple that’s won a few awards for being the best in town. I found this out after I complimented chefs Beau and Mick on how their rendition of an American classic wasn’t too rich and was portioned just right for two. Bread crumbs and parmesan cheese were a nice topping and brought the dish to life, adding a crunch to the bite and sharpness to the aftertaste. Our vixen server, Anna, who is known for her high-kicking antics in the local burlesque troupe the Sizzling Sirens, suggested we spice it up a bit with a side of pepper plant sauce. 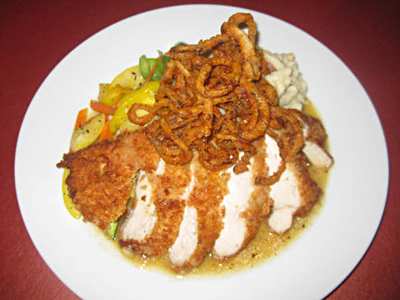 Dad’s menu is really an anomaly. If you are familiar with their sandwiches, you’d most likely think of Dad’s as an edgy, tattoo-friendly dive—especially with sandwiches that have names like “Bikini Kill,” “Angry Road Man” or my favorite, “Hot Blonde.” But if you come in for dinner and keep your ears peeled for the Blue Plate Special, you’ll more than likely be treated to one of the best meals in town. This particular evening’s was a lightly friend chicken breast with chunky mashed potatoes and a lemon gravy, summer veggies sautÃƒÂ©ed in olive oil with salt and pepper, and topped with curly fried onions that twisted like a redhead’s locks. The presentation was fantastic; my chicken fanned out amongst the tangy lemon gravy that perfectly complemented the tender white meat of the breast. A blast of color came from orange carrots, green and yellow squash and bell peppers—all of them fresh and crisp. My mashed potatoes were just like I like them: hearty and full of skins.

At the close of our meal, I leaned back in my seat, rubbing my belly like a crystal ball. It’s clear that there are many more trips to Dad’s Kitchen in my future.