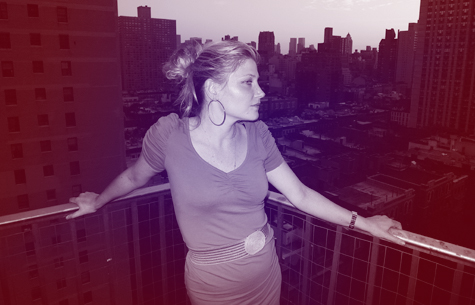 Last fall when Tina Fey won the Mark Twain Prize for Humor, she remarked she was honored to be one of the few females to win this noted honor but looked forward to a time when we stopped counting women’s successes. Can’t a girl just be good at something without it being such a novelty? In Marnie Stern’s song, “Female Guitar Players Are the New Black,” she mocks that idea through her own musical lens.

Sure, Stern has worked hard. Back when she was 23 (she’s now nearly 35), she became quickly enamored with gritty, Northwestern rock a la lady punkers Sleater-Kinney, and soon after became immediately inspired/obsessed by finding her own niche in music. Her determination turned into long hours of learning the ins and outs of hammering out guitar licks–straightforward, jaggedly lined noises. Stern’s approach morphed into finger-tapping, method-fierce sounds and nimble fingers.

While that’s all pretty far back in time, she has recently come full circle. In early January she released Demo, the compilation of songs that originally landed her on Kill Rock Stars, a large majority of which comprise Stern’s first release, In Advance of the Broken Arm. The cassette/digital only release is a good refresher on Stern’s earlier work, rooted mostly in fixated-nit-picked strings, “trying to lock weird guitar parts together to see if they fit,” Stern said.

When asked by her label who would be her dream drummer, Stern automatically noted Hella’s drummer Zach Hill, who agreed to play and produce the project, and went on to tour with Stern as well.

Hill seemed like the perfect match for Stern’s aural energy. The Sacramento-based drummer has adorned many projects with his marvelous percussive powers. His drumming is both rambunctious and polished–explosions of sound, two-steps ahead of the listener. Hill is known for his unorthodox approach to time signatures and his quick ankle-work with double hits of the bass drum. His adventurous style was the perfect nail bed for Stern to lay her own spiky sound upon.

Following her original first release in 2007, Stern was immediately put on a media pedestal as a technically driven female artist. Venus Zine named her one of the “Greatest Female Guitarists of All Time” in their Spring 2008 issue, followed by various nominations at the 2008 Plug Music Awards, including “Female Artist of the Year.” People instantly took to Stern’s quirky approach as both overwhelming and awesome, but being known as so technical has become more of a stigma for Stern.

“I find it annoying. It puts a lot of pressure on me to be good at it and puts pressure on me as if I’m walking around with a guitar slung on my shoulder telling everyone on the street that I’m a good player,” Stern said.

Sure it can get on her nerves, but it’s not all bad. Sleater-Kinney was the predecessor for Stern’s career, and the train can easily continue, bringing new creative ladies to the limelight. Women like Kaki King and St. Vincent push the average bounds of their instrument, looping rhythmically and complexly composed pieces to make full, symphonic-feeling music, changing the normal frame of a female solo artist’s classically simple song. Sound evolves, and if that’s a product of a little extra pressure on Stern, then it’s not all bad, so “at the same time, if it inspires any girls to play music, that’s good,” Stern said.

Stern taps away at her fret board, notes piling on top of each other in a mess, like dropping a deck of cards. Her chaotic guitaring is laid on beats that are all at once anxiously abrasive and so quick they barely touch down as a tangible rhythm. Absorbing it is like drinking five cups of coffee and listening to your heartbeat.

“I really don’t know how or why, I get pretty compulsive about stuff. For instance on tour right now Vince [Rogers, drummer] and I are going to start a Tetris tournament, and I will sit and play Tetris as many hours as it takes to win. So I guess the same thing happened with guitar. I just decided and played it for 10 years every second,” Stern said, and quickly added, “and also it’s fun.”

However, as Stern has gone on to develop in her musical career, she’s lost her drive toward focusing so specifically on guitar parts.

“I used to be more technically driven…and I don’t really care as much anymore,” Stern said. “I would prefer people to focus on my songs themselves, as opposed to just the guitar parts.”

Last fall, Stern released her third full-length, a self-titled piece. While listeners might have expected to have pinned Stern’s style to a specific frantic-guitar pattern, they’ll be surprised by Stern’s resistance to style repetition.

“It always has to be different, and never can be formula, or else it sounds like formula to me,” Stern said. “I always have to just look down and not know. It always has to be a blank screen, unfortunately, which makes it much harder for every single song but more exciting when it catches.”

With her head down, following a new path, Stern has branched out of her own dexterously savvy road to a more lyrical terrain, but reluctantly, which in result gives a tough but honest product. It’s no coincidence such a vulnerable piece would be self-titled. Things haven’t changed too much–she’s still the speed queen–but Stern’s effort to sing out and be heard is far more apparent on this album. For an artist with such a forward musical presence, Stern’s always been notoriously shy when it comes to the lyrical side of performance.

“It’s uncomfortable for me; it’s the hardest part, vocals and finding melodies, so I focus on it,” Stern said. “The last record was real personal for me, and I put myself really into it, and I’m proud I felt brave enough to do that.”

When asked to specify what beyond the writing itself made Stern so vulnerable in this particular album, she simply replied, “The way I’m singing, I mean, the whole thing, it’s like Barbara Streisand.”