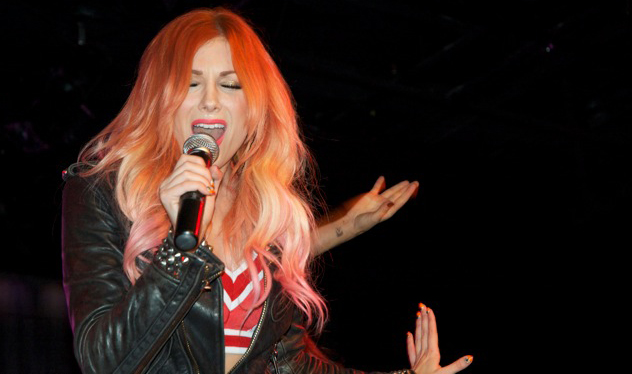 There are two paths to pop stardom: one is to work your ass off until you bottom out or break out; the other is to miraculously land that fat, major label contract and let the industry do its work from there. These possibilities are represented by the trajectories of Bonnie McKee and Olly Murs, respectively, both of whom just blew the minds of a few hundred pop fans and/or tweens Friday night at Assembly—suddenly, under new management.

Likely, you’ve never heard of either of them. Olly Murs has a soulful voice and, according to Wikipedia, a signature “Olly wiggle.” He killed the competition in season six of The X-Factor in the United Kingdom. He’s white, handsome and wholesome; he speaks with an accent, sings without it. He’s everything that a program centered around monetizing the lugubrious task of talent scouting, (i.e. getting advertisers to fund through branding, product placement and commercials what was previously an expensive and labor-intensive part of the music industry) would want. His top hit stateside, “Troublemaker” featuring Flo Rida, is getting regular Top 40 play, but we love him because Chiddy Bang appears on “Heart Skips a Beat.” Murs has three albums, is a double-platinum selling artist in the United Kingdom, and for our purposes here, he’s the dude who suddenly hit the big time and, “ba da ba da bum,” he’s loving it (see what I did there?).

Then there’s the pop-protestant work aesthetic, as represented by Bonnie McKee. Yet initially, her story is one of those jackpot, major label narratives. She hit Los Angeles and had a contract with Reprise Records at the ripe young age of 16. She released her first full-length, Trouble, in 2004, and was dropped after she stabbed her CD to a tree in a label exec’s front yard. For that, she got the wrong kind of attention. This was her bust point. 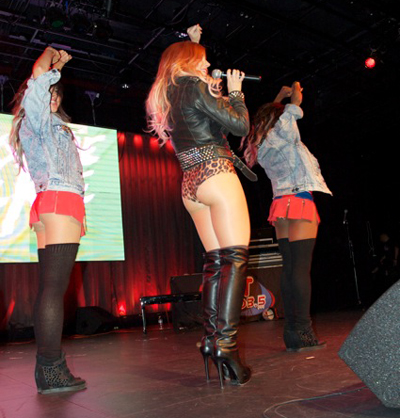 But McKee stuck around, did some paid songwriting gigs, and by 2013, she’d accumulated a series of awards and hit singles. Her songwriting helped define 2010 with a combination of Taio Cruz’s “Dynamite” and, far more importantly, Katy Perry’s “California Gurls” featuring Snoop Dogg (or Snoop Lion?). She was a part of the three best tracks on Perry’s Teenage Dream (I know! They’re all so good! How could we judge them?), the other two being “Teenage Dream” and “Last Friday Night.” Since then, McKee’s worked with, among others, Nicole Scherzinger, Kelly Clarkson, Britney Spears, Miranda Cosgrove, Christina Aguilera, Carly Rae Jepsen, Ke$ha, Rita Ora, Ellie Goulding and fucking Cher!

All of this is to say, McKee has made it, whether she becomes a successful solo artist or not. She’s put the work in, she’s got her name on the liner notes, she’s got the awards in her closet.

But isn’t this a concert review?

Yes, but there’s a reason this review sounds more like a press release. That’s because this wasn’t a concert exactly. It was more of a trial run, a practice lap, a full dress rehearsal. Actually, it felt like watching a guest appearance on The X Factor. “Here’s what they’ve done; now see them live!”

So, we showed up to catch the set up for Bonnie McKee. Then there she was, red hair shining in the stage lighting, clips of her music video playing in the background, her fingers gracing the keyboard. The only other person on stage was a guitarist for accompaniment. However, her opening number was something I expected to hear from Super Mash Brothers, not this reformed singer/songwriter turned pop-star-to-be. She performed charismatically a collage of her best charting singles, starting with “Teenage Dream,” then “Dynamite”; “Last Friday Night,” then “Part of Me”; Ke$ha’s “C’Mon,” then “California Gurls”; “Wide Awake,” and then “Roar”—all the hooks subtly arranged so that every FM-radio-head could sing or scream aloud as our collective hearts desired. It was a strange thing to begin with, had it not been for what followed.

McKee began another song that I can’t recall as I was attempting, and failing, to be a photographer. Then I ran up front as she began her current radio single, “American Girl” (you’ll note that California Girl is sort of already taken). I shouldered past the tweens crowding the stage, who literally pushed me when I tried to leave, and got some mediocre photos of McKee dancing. It was rehearsed and simple, but it worked. There weren’t any fireworks or glitter, but the kids liked it, instinctively. And then she was done.

That was it. Three and out. I was heartbroken.

They set up the stage for Olly Murs, he performed his abbreviated set, made some jokes about being back in America, mentioned that he loved touring with One Direction, and it was over. His accent was cute, his voice was in key, his two backup singers harmonized. 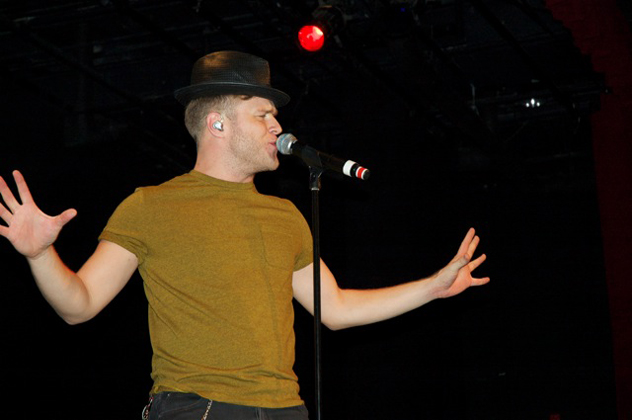 Yet this was the weird thing about this concert. It just seemed like a quick exhibition. There were no musicians on stage, McKee’s opening “song” aside, and everything was tracked on a disc or hard drive somewhere off stage. One large LED screen constantly told us who was playing, as though we might confuse the performers with themselves in this austere setting. The young girls screamed at Murs, and my friend said to me, “I’ve never been to a Beatles show before.” Sadly, that was the highlight. So if this reads like a press release, that’s because this show felt like one.