On a Small Porch in Davis 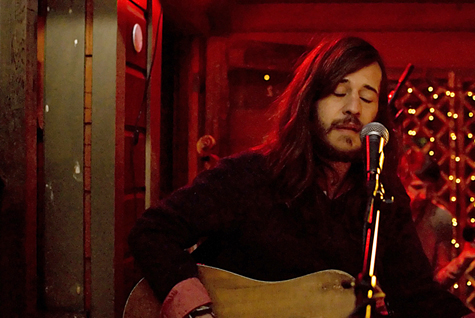 The only barrier that separated the musicians from the audience members at Sophia’s Thai Kitchen in Davis was a white string of lights. The only items that separated the musicians that made up headliner S. Carey were their own instruments, due to the lack of space on the cozy porch stage. The man playing on the porch that night was Sean Carey, best known as the drummer and vocalist from Bon Iver, who made the wooden panels of the porch move Wednesday night.

The show began with an opening set played by Tor House, aka Daryl Jason Lazaro, who stood and sang in front of the other band’s instruments that were piled on the porch. His set only involved him, his guitar, and a few of his number-one fans and friends in the crowd who demanded an encore.

Shortly after Tor House was finished with his encore, Other Lives warmed up for their set. Originally from Oklahoma, the folksy sounding band admitted they were kind of making things up as they went along. Even if they were improvising, they played their soothing acoustic set with ease and seemed to love every minute of it. But during the middle of their set, a group of people near the bar started to have loud conversations that could be heard over the music. At one point the lead singer was strumming his guitar and mildly glaring at the people who were making obnoxious bar noise and said to the quiet people in the front, “Thank you very much for being polite.” Despite the ruckus, Other Lives finished their set to make way for the sounds of S. Carey.

Sean Carey and his band were playing so close together on the small porch that they could have all joined hands while performing if they wanted to. Carey even said that he was glad to play at such a “unique venue.” They started off their set with a low, ambient hum of the combination of the piano, xylophone, bass, drums and guitar, then gradually moved into their songs. S. Carey is the type of band that would be great to have every night in your living room before bedtime to provide sweet lullabies for a good night’s rest. It was mesmerizing to watch the xylophone player balance the four mallets between his fingers as he would hit the different notes on the giant bars. Sean Carey made sure to thank everyone almost after every song and at one point moved his talent from the back of his piano to the front of a drum. Intimacy is hard to achieve at most outdoor shows because the acoustics can get lost in the fresh air. But Carey and his band made each audience member feel as if they were given a one-on-one session with the music. That night’s intimacy was felt in the audience members keeping warm with the surrounding body heat on a chilly night; the dark red glow on each performer’s face that was provided by the only “stage lights” for the show; the street light turning on in the middle of the set, providing S. Carey a little more stage light for their performance; the crowd of 30 feeling the porch pulsate beneath them while they held Chimay glasses and beer bottles at their side.
Anyone can listen to the music of S. Carey on an iPod, in a video on YouTube, or in the car, but nothing can beat feeling the music on a small porch in Davis.