Talent and Connections brought Once an Empire Together, and to Cesar Chavez Park

In the era of “pay to play,” hounding venue owners and promoters for a shot at a 15-minute slot on a bill, slogging up and down the streets of Sacramento flyering the hell out of the grid, not to mention the near-constant act of pestering—um, convincing— friends and family to come to your shows, new bands have a pretty tough time breaking into the local music scene. It’s a grind; it’s the art of the hustle.

So, when a new band is still attempting to ascend the ranks in the local music scene and it manages to pull of one off the biggest coups in the Sacramento music scene by snagging a much-coveted spot on the 2014 Concerts in the Park roster, it’s kind of a big deal.

Such was the case for Once an Empire—with a growing fan base and another invitation to play their brand of alternative rock to the heaving mass of music lovers at Cesar Chavez Park this summer, the fledgling quintet is looking to solidify its place in the local musical lexicon.

“We got kind of lucky because we got scouted on Halloween night out at Powerhouse,” Empire’s lead singer, Melissa McGregor, explains. “We were dressed as the Channel 4 news team [of the film Anchorman] and it was a riot. Everybody loved it, and so that got us a lot of attention and the right people were there and saw us play, and when they told us they wanted us to come play [at Concerts in the Park] we were just like, ‘Wait, what…like, really, really?’”

As one of the latest bands to emerge out of the many jam sessions that echo throughout garages and basements all around the valley, Once an Empire is a product of the wellspring of musicians in this town. Web-like interconnections led guitarist Jess Hudson to regroup with an old friend from high school who ran a small studio space perfect for jamming.

“I had really started paying attention to music again after having two small children, and I really wanted to play so I followed through with it,” Hudson explains. “He ran a little studio where he recorded bands, so that gave us a really easy place to set up. Initially, we were jamming with another buddy, who didn’t work out, but we didn’t know who would play what… So long story short, we realized, Mike, my friend couldn’t cut it on drums and he’d rather play guitar anyway, so he knew about Steve…and when Steve showed up it kind of immediately sounded like something, [but] we were just going to jam and drink beer.”

“Was it like ‘Dad League,’ or whatever,” drummer Steve Samudio questions in with a chuckle.

“Yeah, ‘Dad League’ or ‘Beer League,’” Hudson confirms with a grin. “So, when Steve showed up it started sounding like something. We started recording ourselves because we had access and, when we heard it [played] back, sparks started flying and we thought we could really do something with this [band] and that was probably the beginning of it. Steve had a friend who we called in to play bass and, although Melissa knew of our band early on, eight months later she came on.”

What began in 2011 as Hudson’s desire to get back into playing music upon his return to Sacramento from Montana with his wife, along with two small daughters in tow, ultimately turned from a jam session with friends into Empire’s current lineup: Levi Vigna joined him on guitar, JR Wooten stepped up to play bass and Samudio joined the group to carry the beat on drums. It wasn’t until a random demo came through during their search for a frontman that inspired the group’s decision to bring McGregor on to handle the vocals.

“We were very specifically looking for a male singer…” Hudson explains. “We had a whole bunch of guys send in demos for two or three months just so that we wouldn’t have to bring every person in to try them out, so we would make them record over our demos and send it back. This guy sends one back we couldn’t tell if it was a female or male voice at first, I knew from emailing that I thought it was a guy, but it sounded like a female voice.”

And the idea was born—talk about girl power! 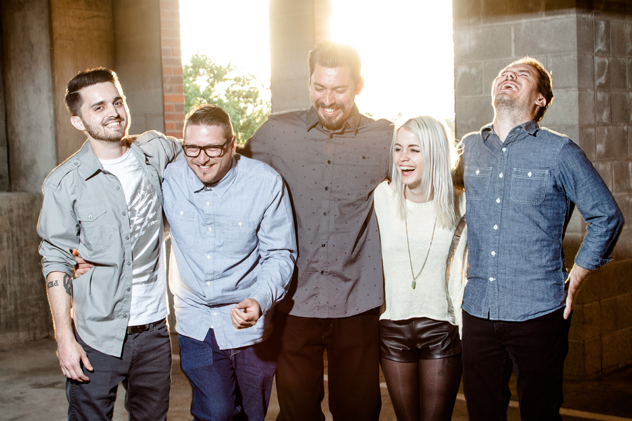 “Although it was a really different take on our music, which was initially heavier than it is now, something led to [Melissa] going in and recording,” Hudson continues. “Once we heard it we asked her then to record to our hardest rock song…and she killed it. So at that point yeah, we were like, hey let’s go for it.”

“Prove yourself,” McGregor fills in with a wry grin.

And that she did. While McGregor admits this is the first band she has ever been in, let alone fronted, she is the lyrical powerhouse in the band—she writes all of the lyrics and harmonies.

“As far as the music goes, it’s a fully collaborative thing,” McGregor explains. “Jess comes in with a lot of ideas—he is constantly writing new stuff, and he brings that to us and we collaborate.”

Now, two EPs later, the band has packed shows and fans who even approach them during interviews in coffee shops—yes, one such fan couldn’t help but approach them to express her avid appreciation for their music after having seen them perform at a recent gig.

“I’m sorry to interrupt you, but I saw you at Pizza Rock on Valentine’s Day,” gushes Elena Cordova. “That was awesome…that was the best part of my day.”

Their music is a combination of catchy, undulating melodies set over an abundant supply of crunchy, distorted rhythms. Empire first entered the scene with its 2013 offering, 11 Minutes After Sunrise and almost immediately after its release began amassing a stockpile of songs that ultimately evolved into a second album.

Recording the band’s second EP, Changing Shapes, produced, recorded, mixed and mastered by Sean Stack at Fat Cat Recording, was an experience that its members cite as essential to putting out a collection of songs they could be proud of. Stack, the ultimate task master and one who practices the utmost professionalism in the booth—he is a musician himself, after all—was essential to the band staying on track, according to Hudson.

“Sean is just the kind of guy who sits there and gives you his full attention,” McGregor explains. “He’s treating your art as if it’s very important to him and that’s the coolest thing about working with Sean. You get his full attention and he works so hard and he’s such a talented guy. That’s why we like to give him a lot of leeway with co-producing and getting his ideas into it because he’s just so good at what he does.”

The fivesome is anticipating a healthy turnout when they unleash the beast that is their second album at the record release party on March 14, 2015, at Powerhouse Pub in Folsom. They’re also gearing up to expand on their growing catalog of music. Not too shabby for a new band on the block.

“We have enough material for a whole new album right now,” Samudio says. “Some songs are better than others, but they’re there.”

With a healthy selection of material, a dynamic that includes bandmates who actually enjoy playing and recording together, Once an Empire looks poised to take on, well, the Sacramento music empire. 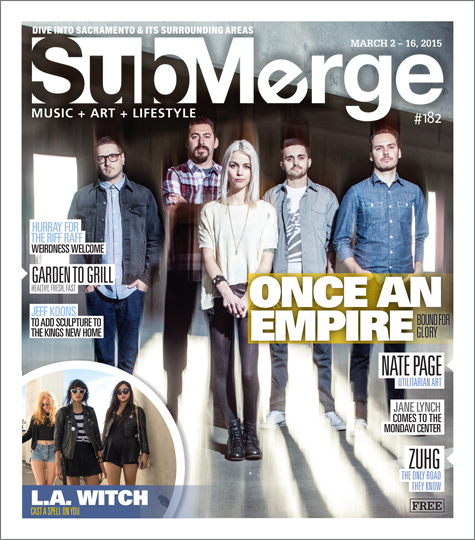