One Bourbon, One Scotch, One Beer 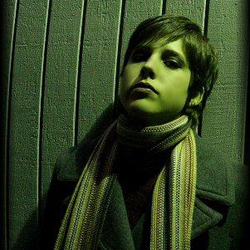 Aroarah Returns from the Road with a Big Package

The party girls of Aroarah are home and back to their day jobs after a July tour, but in their minds their real jobs are on hiatus. These four ladies from Orangevale could teach a class on touring, proving they can rough it just as much as the boys—and still have room in the van for makeup.

“If we had our way, we would permanently be on tour,” lead guitarist Morgan said. Aroarah travels in “a big ol’ Chevy van,” an extended back version with a reclining bed backseat—the family vacation special, before RVs owned the road. Road habits include nights spent on campgrounds, friends’ couches and even rest stops. “There’s enough room for us to sleep in the van,” Lydia said. “If we can’t afford a hotel or no one is giving us a place to crash for the night, we’ll just crash in there and get really sweaty.” It’s a romantic lifestyle, but sometimes it yields unwanted results, like a giant moose carcass at one of the rest stops.

Bassist Chelsea compared their touring lifestyle to traveling gypsies, working the angles to live off the grid. To clean up after that night’s sweat smell out, they hit up chain mega-gym 24 Hour Fitness, the national chain they have memberships to. “We look like hobos going in there,” lead vocalist Lydia said.

After years of touring, the band has noticed significant touring differences between guys and girls—the most obvious was the lack of “smelliest balls” contests in their van. “We like to look nice and wear makeup on stage,” Morgan said. “Even though we have raccoon eyes at the end of the set.”

It might be odd to imagine, but even girl rock bands have groupies. It was the first query Morgan’s co-workers had when she returned from the tour—and of course, the follow-up question of whether she slept with them.

“It’s different,” she said. “We’re not out there partying, doing drugs and having sex with them. They usually offer us a place to stay. It’s a far cry from the clichÃƒÂ© male role.” Even the girl groupies who love Aroarah are not getting a chance backstage. “We’re not sluts, yo,” Lydia said.

The pranks that come from countless hours cooped up in a van together are manifested through getting their groupies drunk, convincing them into embarrassing antics, and inside jokes too contained to be understood outside the four-girl circle. Several times during our conversation, odd catch phrases were echoed amongst the girls, making them laugh and me feel left out.

“It helps that we were friends before we were a band,” Lydia said. “Two weeks into being a band we kicked Chelsea out, only to regret it minutes later. At this point we’ve got a deep family bond that if any of us tried to quit, the others wouldn’t let it happen.”

Drummer Mackenzie is described by her bandmates as the designated road warrior; fueled by weed and pomegranate Rockstar energy drinks. “We have to make her stop driving to eat when she gets too wound up,” Morgan said. “Someone also has to stay alert in case she crashes [from the Rockstar].”

Chelsea broke down the post-show routine. “Morgan and I are usually wasted,” she said. “Lydia has to sleep to rest her voice or she’s wasted as well. So Mackenzie and Carl, our tour manager, are driving.”

The furthest Mackenzie has driven is South Dakota, which led to a gig overshadowed by the Sturgis motorcycle rally. To boot, the bar was so small the band could not fit its equipment on stage, forcing them to use the house gear.

“Kenzie actually had a toy monkey with cymbals as her kit,” Lydia joked.

Since Sturgis stole Aroarah’s core biker crowd, the van rolled through to see what all the fuss was about, only to find American Idol‘s Chris Daughtry. Oddly enough, Daughtry haunted the girls’ tour schedule, playing the night after them each stop. “We might as well have opened for him,” Lydia said. “Sorry Chris, we were headlining this tour, maybe next time.”

Even so, the girls managed to sell a few CDs to a few Hells Angels they encountered at a rest stop outside of Sturgis, and have gotten some rave reviews from them on their MySpace page.

Aroarah seems to operate best in the seedy underbelly bars. The band played at the Hellbent Clubhouse biker bar in south Sacramento this June, winning adoration from the counterculture’s most intimidating sweethearts. Minutes before the set, Morgan got a tattoo on her wrist that reads “patience” as she frantically insisted the tattooist finish so she could plug in. “It was pretty intense,” Morgan said. “We had security, but they were all so unbelievably kind.”

“Whiskey” is all Chelsea had to say regarding their stop in Fresno last month. My first interview was a phone call after this night. “We just got out of IHOP this morning,” Lydia said, even though it was 2 p.m. The Fresno venue hooked it up with a $75 tab that, to Aroarah’s knowledge, was well surpassed. “We’ll definitely be going back,” Chelsea said. Sadly, Lydia’s vocal troubles kept her from partaking as she stuck her nose in a book and indulged in her vocal remedy of honey water and Chloraseptic strips.

States such as Utah that wield a cap of 3.2 percent alcohol by weight on beer sales get outsmarted by the raging ladies of Aroarah, who discovered an exception—Icehouse. “It’s 5.7 percent alcohol,” Morgan said. “But you have to get it from a specific liquor store at a specific time that’s run by the state”—making Icehouse not only difficult to swallow, but a chore to obtain.

The ladies of Aroarah spoke appreciatively about the promoters that gave them food, booze and sometimes a place to sleep and shower. But the band is anxious for bigger tours that come with full tour riders, and would love to stretch further east. What’s their first ridiculous rock star request? “Pink M&Ms,” Lydia joked. “I’ve decided that when we do get to have a decent tour rider, I’m requesting rainbow farts.”

Until the road calls again, Aroarah is back on its dull daily grind. In this down time, the band members are focused on recording and shopping new songs to labels in hopes of getting picked up by a major indie.

If the plan sticks, Aroarah will have another album ready by next summer, even if it’s self-released again.

This week the Boardwalk, the same venue that gave Aroarah its first gig, will commemorate nearly eight years of dedicated rocking with Aroarah’s The Big Package CD release party. 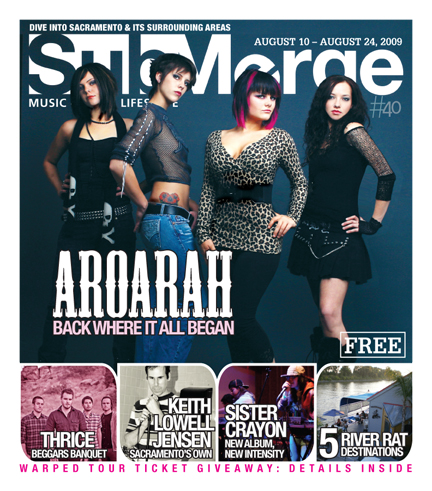