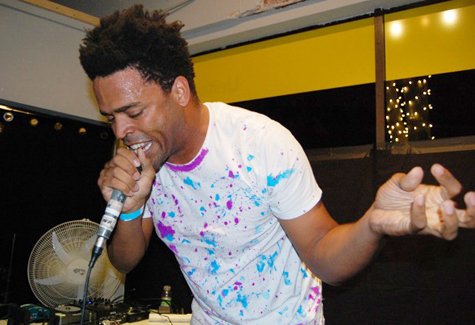 Busdriver introduced himself to his Sacramento faithful by stating his name and the fact that he “makes hip-hop the wrong way.” Immediately I began to wonder who this slight jab was directed toward, considering the door charge was $13, and he filled out the boutique rather well.

It depends on where you are raised on hip-hop, I guess. A graduate of South Central Los Angeles’ Project Blowed community, Busdriver is expected to be technically flawless and remarkable in his weirdness. Had he lacked these qualities, the faithful in that district would have politely asked him to “pass the mic” long ago. But eight albums deep (two of which were released on Epitaph) and touring schedules to foreign lands make it difficult to determine how he is incorrectly making hip-hop.

I will admit, I own zero Busdriver records and have often expressed befuddlement in the allure of his music–fast rap never did it for me. I learned about Busdriver the live performer years ago, though. It was an experience that altered my perception of his work. For the right price, I will attend a Busdriver show, as should any hip-hop connoisseur.

Aspiring rappers, aka the opening acts, take note of the level of expertise you must wield in order to rock a crowd bigger than your closest Facebook friends. Busdriver is easily one of the most compelling performers in the business, which is heightened by his lack of a posse or DJ. If Busdriver is on the bill, Busdriver is all you’ll see. One man with lungs like hot air balloons, bursting rhythmic tangents of tossed word salad–and somehow, his fans find enough connection to sing along. Sweet mercy, I saw people singing along, while local fledgling talent Chuuwee was in ear shot of me, wide-eyed and excited, telling his crew “I don’t know what he’s saying, but it’s hella fast.” Take notice, young pup.

I am comfortable with never comprehending the crossword puzzle of darts spewing forth from Busdriver’s mouth. His machine-gun delivery is the most impressive display of MCing I’ve seen in person. Sampling Mozart’s Sonata in A Major, “Me-Time… (With the Pulmonary Palimpsest)” was delivered with hairpin precision. Even if Busdriver faltered slightly, he casually filled the space with off-the-dome rhymes, until he regained his cue. I’ve witnessed some impressive Chicago MCs flex that ‘90s “do or die” style, rolling the Rs and bouncing to a “pibbitty-pibbitty” flow, but there’s a practiced routine employed. The chopping up of styles is a Project Blowed staple dating back before Freestyle Fellowship, but Busdriver is a master, while others are mere apprentices.

Most hip-hop heads, myself included, are still not ready for Busdriver. Although, judging by the audience–keying in on the all-ages element–traditional hip-hop heads were the minority that night. It would seem Busdriver is embraced by the young and the obnoxiously hip. Hip-hop is still in denial of its nerdier side–as if DJs weren’t the most reclusive oddballs ever–making Busdriver the talisman of art rap. Until being uncool replaces an undying obsession with being the most gangster, Busdriver will be sarcastically criticizing his art with jokes about “doing it wrong.” Although, those willing to open their minds to the complexities of his style shall be exposed to a format cursed to be called “ahead of its time” in the ensuing decades.