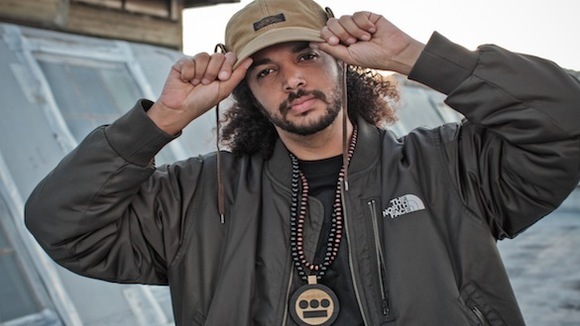 Getting to Know a Familiar Face

If you like hip-hop, you probably know this underground rapper/producer and probably don’t even realize it. As a result of 15 years of “forward-thinking” and hip-hoptimism with Souls of Mischief and Hieroglyphics, Oakland native Opio’s ’90s-esque collaborations have been emulated by the likes of Kanye West and Lupe Fiasco. Opio offered up some “vulture’s wisdom” and spoke to Submerge about his most recent solo project, hip-hop philosophy and his current tour that maked a stop in Sacramento.

There were some incredible things said about your talents from other magazines. A lot of people listen to your music; a lot of people know who you are.
At this stage, when I’ve been doing it for a while, it’s just a blessing to be able to do what you love. Like the press, it’s different for me, because people who are going to listen to me, I don’t think they are swayed really to hard by what’s hot and what’s not. There’s a connection that I have with people that I’ve learned over the years. Just being consistent with the music. Some people fall off the map and don’t stay consistent.

Your new album [Vulture’s Wisdom, Volume 1] came out July 15. It’s volume one of a trilogy and you’re going to try to get all three volumes out within a year. Are they already recorded? What’s the deal?
Volumes one and two are already done. Volume three, we don’t want to overstep our boundaries and make sure that we have something that we can feel we can manipulate and want to work on it. It takes a while. Volume one was done last October, so it’s been done for a while. Volume two was done at the same time. You don’t really want the music to get old and stale. With volume three, we’re still trying to tweak it out a little bit, just off of what people say. Volume one and two we did quickly. We just had a really good creative energy and the space that we were in was really cool. I’ve worked with Architect [producer] before. Our mentality is that we want to start more of a movement than just getting people into one or two songs.

You want to try and get them to like the whole trilogy?
We’re trying to change people’s ideas about how they listen to music. Like, instead of listening to songs or a single, or trying to listen to an album and skip through every single song on your first listen. Everybody is going to skip around once you had a CD for a while, because you’ve got your favorite songs. If you’re going to pop a CD in from an artist that you like, you should want to be able to sit down and listen to it. The artist has to give you what you need as well. You don’t want to have fast-forward material. But our mentality is we’re making albums, we’re not making hot songs or a hot single that everybody can jump on and be like, “Yo, this is the joint right here.” It’s more about the whole album—more so than the trilogy. We want people to get into the album as a whole. Listen to the record, sit with it. A whole solid listening experience”¦change people’s mentality in terms of how they’re listening, at least to us.

You said you want to change people’s perspectives. What does that have to do with the album title?
The title is just coming out of conversations that me and Architect had in terms of what we were seeing in hip-hop. If you ever hear people just really disgruntled, “Back in the days, it used to be so tight, and now it’s all commercialized. It doesn’t have the same energy it once had.” That’s what people say. To me, hip-hop is just powerful. It’s more powerful than it’s ever been. Even though maybe some people are just quick to have this real apathy toward hip-hop”¦ Me and Architect still have the vision and the wisdom to see where other people see nothing, we see sustenance. They done picked away at it and left this like skeleton. But, we can still swoop in with the “Vulture’s Wisdom.” We can eat and see food where others just see nothing.

This tour that you’re currently on, The Freshly Dipped tour, it’s the 10th anniversary tour of Hiero Imperium. You’re playing with Hieroglyphics as the headliner, but are you doing any of your solo project songs?
Yeah, definitely. My album is the album that’s out right now. It’s a good opportunity for me to promote myself. People know Souls of Mischief and Hieroglyphics, but they don’t necessarily know me. It’s an opportunity to raise these peoples’ awareness of what I’m doing. Because, a lot of the people that been listening to Hieroglyphics and Souls of Mischief over the years, they know me and they’re in touch with me and they like my style, but it’s just kind of hard if you’ve been doing it 15-something years, all they know is Souls of Mischief and Hieroglyphics, they don’t really know to say Opio.