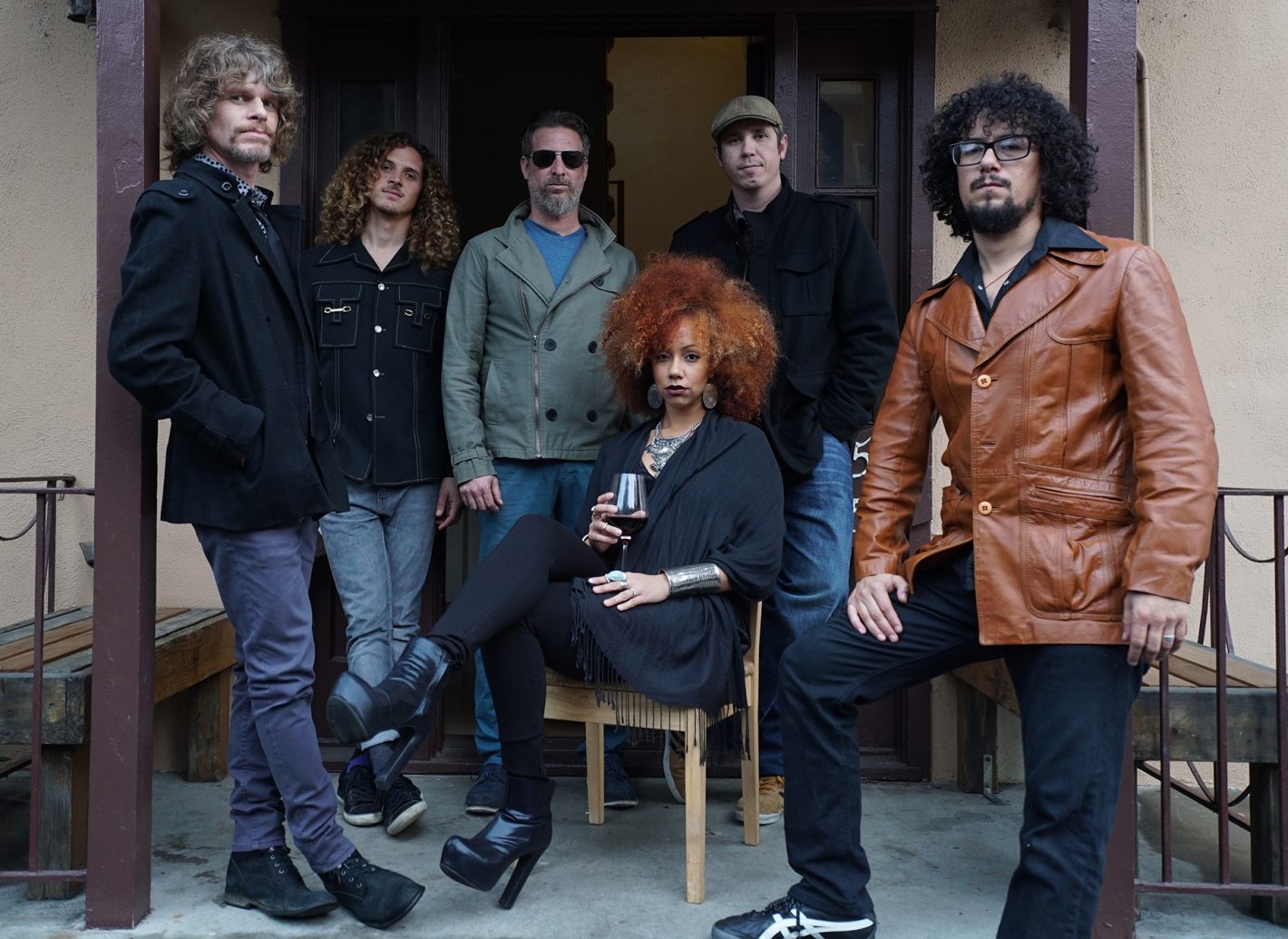 “Tightest rhythm section in Los Angeles and California,” Adryon de León, Orgone’s vocalist from Ojai, California,tells me over the phone.

For a vocalist who sings in a group applauded by critics for “hitting their stride” following the release of their newest album, this is easily the most (and perhaps only) boastful thing that de León says during our entire conversation. The rest of the interview, just like Orgone, is a humbling, introspective journey through the process of maturation in a creative environment.

De León joined the group in 2013, 14 years after Orgone’s official inception in 1999. Orgone draws influence from 1960s and ‘70s American funk and soul, but if you ask them what their genre is, they’ll most likely say, “California soul,” which is a rather fitting name. Los Angeles-based guitarist Sergio Rios created the group alongside keyboardist Dan Hastie, and to date, the duo has released 10 albums under the name Orgone. Rios, who de León calls a “visionary” and someone who is “on a relentless quest for the perfect sound,” first learned to play the guitar at age 15 by playing “Fade to Black” by Metallica. And, like most teenagers, he evolved from this stage, not only personally, but also musically.

Rios and Hastie began studying jazz, soul and R&B, and with the exploration into new genres, they began to add horns. Before they knew it, they were recording their own blend of 1960s/’70s funk with modern recording techniques. De León refers to the group as a “rotating, family-band vibe,” which makes sense considering the number of artists who’ve been in the group since its start. Maybe not the typical family (or maybe the ideal family depending on your upbringing), but the feeling of love is easily heard in their music no matter who’s playing in the group.

The band’s introduction to de León might not have been your Hollywood-envisioned moment—Hastie searched “female” + “vocalist” + “Los Angeles” on YouTube and stumbled upon a video of de León singing in one of her former bands. Impressed with her vocal range, the group promptly invited her to tour since their vocalist at the time could no longer travel, and right on cue, de León flew to Bloomington, Indiana, to learn Orgone’s music.

“The first time I ever heard them play was at the sound check … and then we did a show that night and then from there everyday of the tour I’d learn another song,” she says about her start with Orgone.

This would prove to be the challenge that de León and perhaps Orgone needed in their respective careers.

“I’ve toured before—I toured with a nonprofit group—but not like rock ‘n’ roll life,” she says. “I was working with kids and families; this was the nitty-gritty, real deal … play the clubs every night, 3 a.m. … So that was my first experience with that.”

This also happened to be the first time de León would enter a songwriting role. Her voice was a known entity at the time—she had the passion and range of a 1960s soul superstar—but she just didn’t have the experience of channeling that into a creative role.

“I had been hired previously because of that sound, but I didn’t come into my own skin until I started with Orgone,” de León says. “I was like, ‘This feels like a warm blanket.’”

De León played a key role in the release of Orgone’s 2015 studio album Beyond the Sun. Her evolution into a creative powerhouse was ongoing, and Orgone provided the perfect setting for her to blossom. 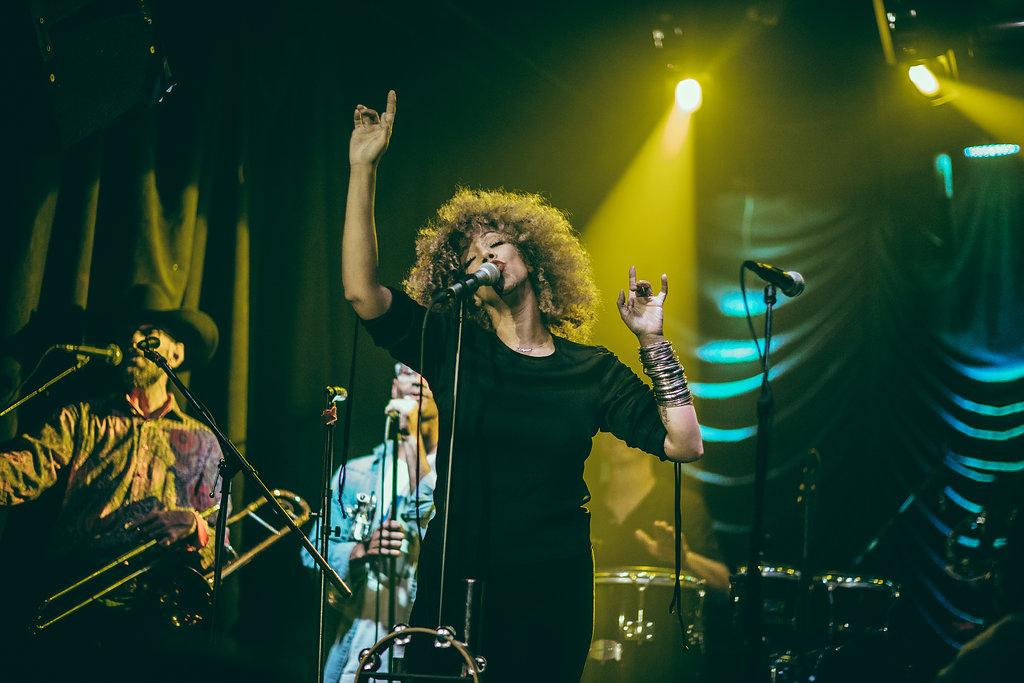 “After we did our first record [together] I said, ‘This is a process that I really love to do and if I can let go and just put down honest art then it’s fine [and], at the end of the day I can sleep well,’” she explains about accepting her art.

The next album that the group released, Undercover Mixtape, is a collection of soulful covers and organic creations. Songs like “Neither One of Us”—an anthem made famous by Gladys Knight and the Pips—epitomizes the sound of this group: a swaying, heartfelt, transportation back in time. Undercover Mixtape was released in 2018, and a year later, they would release their hit album Reasons, a collection of tracks that is the culmination of a group of talented and humble musicians.

Joshua Tree was their base camp during the recording of Reasons. The group rented a house and a studio in the famous Southern Californian desert landscape and embarked upon a four-day journey to compose and create the sounds that would give life to the album.

“We would be up until, like, 4 or 5 in the morning, and rouse around 1 or 2 in the afternoon … you know, artist hours … and we would cook and commune and be a family and then ultimately one of us would head toward the studio and we’d all follow suit,” de León says about their time at Joshua Tree recording the album.

The contents for Reasons, at least from de León’s perspective, were on the pages of a dark-brown, leather journal, gifted to her by a student, that collected dust for 12 years before she began filling it with deeply personal words.

“There’s something enticing about the blank page to me,” she says about her journal. “If you look at the first half of the journal when I was working with the album it was like crazy drawings and words and nebulous things. And then when I’d actually hit the studio I would take a blank page and make a fully organized, constructed version of the song that I could use while recording because I’m Type A like that.”

That Type-A personality apparently found its way onto the streets of gridlocked Los Angeles, where de León made use of her time in traffic by listening to demo tapes that were recorded at Joshua Tree before putting the finishing touches on her work.

“I work best in my car,” she says about her mobile studio sessions, “because I have nowhere to go.”

The album starts with de León’s dreamy vocals before the remaining members—Rios, Hastie, as well as drummer Sam Halterman and bassist Dale Jennings—lay the seeds down with their head-bobbing rhythm to kick off a groovy album. The second song, “Hands,” feels like a summoning of the original funk spirits with a hypnotic drum line that compliments de León’s powerful voice. Two songs later, perhaps my favorite track of the album, “Whisper to Me,” features a somewhat different sounding voice for de León, with wavy sound effects that highlight the group’s focused yet abstract sound.

Nine tracks in total at a length of 41 minutes and 56 seconds, this album has a little bit of everything for your dancing and nostalgia-inducing needs.

For the Sacramento audience, you can jam to this group in person and fulfill this sentimental feel at Harlow’s on Nov. 24 as they showcase Reasons. Terin Ector, a vocalist who’s appeared on previous songs with Orgone most notably the galactic-rock sounding “Cosmic Slop” off of Undercover Mixtape will sing alongside de León at the show. De León says that “he’s got this soulful voice that transcends time,” and if that’s coming from the reincarnated voice of Aretha Franklin, I’d take her word that it’s going to be an energetic experience.

“I just hope that people want to come out and continue on this journey with us,” she says, because the journey will never stop, a realization this group has made and wants to share with the world. Times may feel tense, but just remember, in the words of de León, “the song’s never going to be done … and as soon as you accept that it’s fine.”