Out of the Rabbit Hole

Conducting from the Grave Exhumed from Label Nightmare, Set to Self-Release LP

For Jeff Morgan and the assembled members of Sacramento metal crew Conducting from the Grave, the last few years have been transitional to say the least. On the heels of a veritable meltdown with the record label that released their first two full-length albums—Sumerian Records put out CFTG’s When Legends Become Dust (2009) and Revenants (2011)—the band choked up and decided to swing away on their own for the next record. Utilizing funds from an enormously successful Kickstarter campaign, through which the band raised a cool $19,000, CFTG were able to consolidate a nearly two-year hiatus following the release of Revenants into one explosive, sharp-edged snapshot of their turmoils and triumphs as a band.

The new self-titled album will be self-released and comes bristling with riffs, bulging with morbid growls and buoyed by a somewhat newfound restraint from the super-shredding guitar tandem of Jeff Morgan and primary songwriter/guitarist John Abernathy. The core trio of Morgan, Abernathy and drummer Greg Donnelly continue to showcase an intuitive ear for punishing breakdowns and apocalyptic verses, helped incrementally by bassist Jackson Jordan, with vocalist Mikey Powell’s guttural bellows providing a brutal vehicle for the band’s hybrid of abrasive death metal and its more melodic metalcore roots.

That this is achieved by way of songs inspired by video games (“Honor Guide Me!,” the album’s opening track, is about a fictional war as seen through the eyes of Protoss Zealot, a character in Starcraft) and other non-sequitur lyrical fantasy is important. After nearly a decade together, weathering the ebbs and flows of the music industry machine, having fun seems to be the band’s number one priority.

Conducting from the Grave is celebrating the release of their third LP, fittingly, with a trio of record release shows, including a sweaty spectacle at The Boardwalk Oct. 5, 2013. Submerge caught up with Morgan to discuss the evolution of the band, their label woes and the light at the end of the tunnel.

In what ways were you hoping to evolve in a conscious sense from what you’d been doing before?
When we put out Revenants, we didn’t want the album to be too crazy. The record label had been saying stuff like, “We get it; you can play guitar. You don’t have to prove it several times in one song.” Stuff like that. Because of our label experiences, we want them to actually care about us and pay attention to us. So we were like, OK, what can we do so that we can still be happy with our writing, and they can be happy with the direction we’re going? We kind of tried to do that, and a lot of our older fans weren’t as into the second album. It ended up not being something that made any difference with the label whatsoever; we were still bottom priority for them. So we decided with this new album to expand in a new direction and to rediscover our old sound a little bit, because that’s us. Just kind of incorporate the whole evolution of our sound and do something new with it. That’s what we did in writing this new album.

For this album, what discussions were happening internally regarding the future of the band and leaving Sumerian?
How it went was we wrote the album, the first-draft version of it. We sent demos to the record label almost two years ago now. They were like, “We think you can do more with your sound…” We kept going back and revising the songs, and that turned out for the best because we kept revising. But they kept giving us really vague feedback. One time one of the guys said, “That one needs more culturally relevant anthems.” What the hell does that mean? Did he want us to play what was hot right now? That’s not really us. We’re the type of band that we like to think our sound will stand the test of time rather than be a hot-selling sound at the moment. It was a really frustrating experience. It took a little over a year of doing that, then finally we had a phone conversation with the label and they were like, “We’ve been holding off on this release and not approving budgets because we had some bigger signings getting ready to come through, and now these signings are coming through. We’re gonna leave it up to you. Do you want to continue with us? We’re not gonna hold you to the third release option.” So it was a mutual decision; we were like, “You know what? We’re tired of the BS, so yeah we’ll cut our losses and go our own way.”

So we took it upon ourselves at that point to just go ahead and record the album, with all the revised versions we did. We did it as cheaply as possible since we were fronting some of the expenses ourselves and building debt and we weren’t sure how we were gonna pay for it. We weren’t sure what we were gonna do with the release yet. We did a lot of the tracking at home, which saved money. We’d seen a few bands doing the Kickstarter thing, and we decided that was the best option.

There are lots of progressive ins and outs to a lot of the songs, and there are sidetracks into more melodic territory as well. I’m thinking specifically of the vocal run on “Into the Rabbit Hole.” Was there a concerted effort for the band to push boundaries with this album in ways you hadn’t before? Or was it more of the rediscovering your older influences?
Some of the more melodic or mellow parts with clean-toned guitar and stuff, that’s something we’ve always tried to have at least a little bit of. Revenants was a little heavier. We’re trying to go back to more catchy melodies. At the same time, we’re trying to go a little heavier with the death metal vibe as opposed to metalcore. As far as the vocals—the actual singing that Mikey [Powell, vocals] does—we have one very short part at the end of the previous album where he did that. It seemed to go over pretty well, and he did a lot of singing in a couple previous bands he was in. We like his voice, and we figured why not let him take a couple spots on this album and expand more in that direction without getting overbearing with it or changing our sound to incorporate it.

Is it possible for you to pick a song on the new album that you feel embodies the spirit of the band, and sort of overcoming what you’ve gone through?
I would say that the two songs that we’ve officially leaked—“Honor Guide Me!” and “Into the Rabbit Hole”—I think those both embody that. Those are my two favorite songs on the album. “Honor Guide Me!” I think is musically representative of the band’s sound as a whole, fully representative of our whole career as a band. It encompasses the core of our sound. I don’t know if the way I’m saying it makes a lot of sense, but when I hear that song, it sounds like us. That’s our sound. I could have heard that song before we wrote it and said, “Hey, that sounds like something we’d write!” “Into the Rabbit Hole” I think more embodies where we’ve ended up, where we’ve come, where the journey has gotten us. It’s musically where we’re at as a result of our experiences through the years as a band.

Conducting from the Grave releases their new self-titled album Saturday, Oct. 5 at the Boardwalk (9426 Greenback Lane, Orangevale). Opening the show is Fallujah, Lifeforms, Soma Ras, Gary Busey Amber Alert and Awaiting the Apocalypse. Doors at 6:30 p.m. Tickets are $10 in advance, and $12 day of show. For more information on Conducting the Grave, visit the band on Facebook. 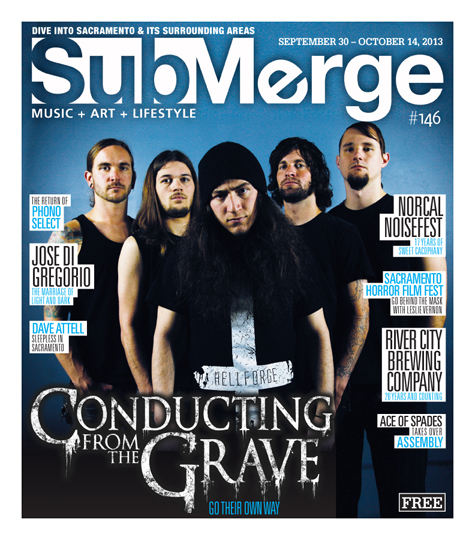