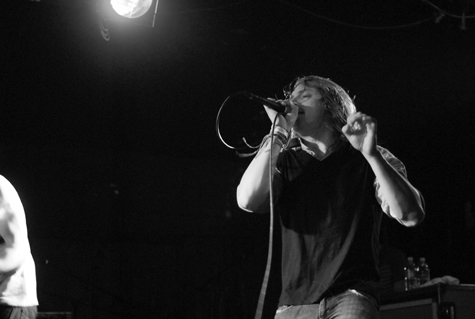 WEDNESDAY NIGHT AT THE BOARDWALK WAS an evening filled with booty shakin’ and hand clappin’ as the PacSun Tour graced Orangevale with its ever-so-rockin’ presence.

I must admit, I’m that guy who misses the opening band most of the time and this was the case once again. We arrived right as Denver, Colorado’s electronica meets screamo act Breath Carolina (not part of the PacSun tour) was loading off the stage. Take a quick peek at their myspace page and you will see what I mean. Think dancy-techno laced with synthesizers, whiny vocals and brutal screams in the background. It’s interesting to say the least. Never mind, it’s actually more annoying than anything else but hey, that’s just my opinion.

After a lengthy set change, which gave me just enough time to consume a delicious frosty brew, Another Day Late was ready to rock. Hailing from Orange County this quintet sounds like a billion other bands out there in the scene right now. They lacked energy and really didn’t do much to get the crowd involved besides the typical clap along that I am really starting to despise. Sixteen-year-old girls seem to love it though, so keep it up dudes. Their set was short, no more than twenty minutes, but most people seemed to lose interest after the first song or two.
The third band to take the stage was Danger Radio. They were surely the youngest band of the night but had the most mature sound. Vocalist Andrew De Torres has a great soulful, almost R&B style voice that reminds me of Jamiroquai a little bit. By the end of the set they had the entire floor moving to the music after De Torres mentioned, “You guys look a little tense”¦let’s start a dance party.” Danger Radio proved their talent by providing the crowd with spot-on three-part vocal harmonies, impeccable beats, the occasional guitar solo, and oh yeah, more hand claps! These kids will surely have a strong career ahead of them as long as they steer clear of the cookie-cutter, pop-punk sound that is dying fast. Something tells me they are very aware of this though; be on the look out for their full-length release sometime this year.

Envy On The Coast’s lead singer Ryan Hunter has cool dreads, and guitarist Sal Bossio has a sweet afro. Those were the first things I noticed. They took second place in my “band with the coolest hair of the night” contest. I also noticed the blinding floodlights (provided by the band) that kept flashing ridiculously bright in the crowd’s eyes. What I failed to notice was something original coming out of the speakers. These guys are great at what they do, don’t get me wrong, but it’s been done before. They did have a good following though I will give them that. Kids were singing along and jumping around and the band seemed to feed off the crowd’s energy, which is respectable enough. Their single “Sugar Skulls,” was the crowd favorite and included a neat little backup vocal melody by Afro Bossio, as I have come to call him. Alternative Press named these guys one of the “100 bands you need to know in 2007.” Thank god it’s 2008.

Rounding off the night was Victory Records’, The Audition. These guys are extremely solid. It was obvious that they deserved to have the coveted headline slot. The kids that did stick around were ecstatic to see them, singing back every word. The overall level of energy was brought to new heights as they charged through songs off both of their albums, including “Champion” which came out just last week. The band mentioned that they just shot a video for the song “Warm Me Up,” which was my personal favorite. Another crowd favorite was “Make It Rain,” but I didn’t like that one very much seeing as I really want it to stop fucking raining! For the final song of the night, Ryan from Envy On The Coast came on stage and whirled his dreads around some more. Cool shit.
All in all this was a pretty radical show that opened me up to some cool new bands that I probably wouldn’t have found if I didn’t attend. Plus, The Boardwalk kicks ass because it sounds great and they serve beer. Seriously, every venue should serve beer, but make it cheaper please, thanks!