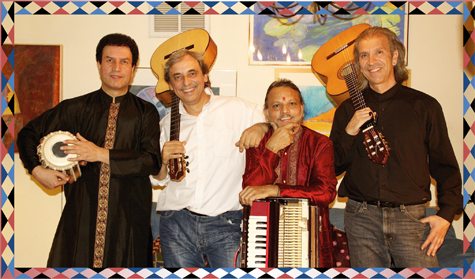 Pandit Binay Pathak is the son of a legendary sitar player, the late Pandit Balram Pathak, and from a very young age Binay studied under his father, deeply rooting him in Indian classical music. His musical lineage goes back over 500 years! “Pandit” is an honorific term denoting a level of expertise and respect, and the English word “pundit,” or expert, is derived from it. Binay Pathak hails from Mumbai, India, and has performed all over the world with India’s top ranking artists. Now he divides his time between Mumbai and California, coming here to perform across the United States and to teach sitar, tabla, voice and harmonium at a school he established in Sacramento five years ago called Sohini Sangeet Academy (http://sohinisangeet.org/). On April 29, 2012 at 24th Street Theatre from 3—5 p.m. you can see a rare performance that combines Binay Pathak’s masterful vocal and harmonium skills with the varying sounds of his band, called “the Beats.” The members of the Beats, including Roberto Corrias (composer, flamenco guitar), Ahmad Siar Haseq (tabla) and Jose Manuel Blanco (flamenco guitar, producer, arranger, composer and “Cantaor,” or flamenco vocalist) will join with Binay Pathak, to blend on one stage classical Indian music with Cante Flamenco and Sardinian melodies grounded in the ancient old world traditions. Dancers Gauree and Daksha Shah will also be on hand performing semi classical Indian dances. Tickets are $15 for general admission and $50 for VIP and are available by calling Sohini Sangeet Academy at (916) 217-3259. Expand your musical horizons, go see some world-class musicians playing a style of music you’ve likely never experienced. You’ll be glad you did.