Before We Were Saved By Technology 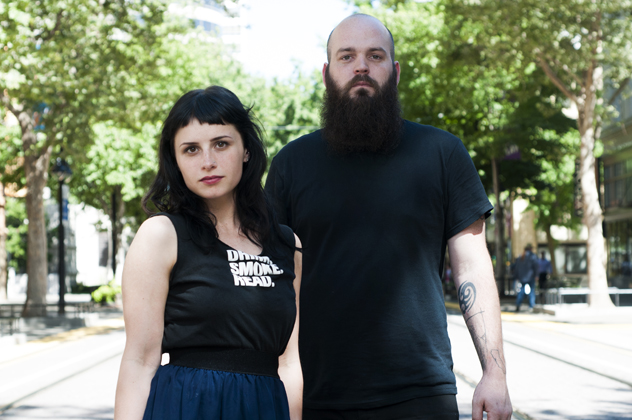 It’s 2013: NASA is collecting applications for Mars colonists; international, state and local governments continue to gut social programs and education through austerity measures; and California, despite its drastic cuts, projects a minimum $1.2 billion dollar budget surplus for 2013. As I write, the still hot ashes of the Egyptian Revolution are igniting a populist uprising in Turkey. This month, according to major media, suicide is an epidemic. The world is lonely, the global economy is stagnant and in an effort to grow, we’re colonizing space; everywhere—Arrested Development season 4 included—it’s austerity and decadence, riot and romance.

“I’m just here in my body,” sings Julie Lydell on “Oil,” the first track of Paper Pistol’s debut album, Deliver Us from Chemicals, “No weight on my chest/No knot in my throat/Unimpaired by the impulse to make sense/of senseless things/patterns and chaos/God, I’m tired/and I’m sick/of caring about where all this is going.”

Lydell’s voice, slightly nasal and rich in timbre, contains our moment today: the anxious present, the absent future. True to pop form, Lydell locates herself as a body, anywhere and everywhere. The lyric I, here, is alone swimming in gin and existential crisis at the bar, walking the streets of Turkey surrounded by neighbors and teargas, discarding consequence, guilt, frustration and concern.

This chorus increases via the layers of samples, melodies and instrumentation before falling to the austere, the minimalism of Ira Skinner’s rim-shots over a pitter-patter series of electronic clicks. As a song, “Oil” utilizes a Thom Yorke-ish intro, syncopations and percussive pops that sound like a digitized steam engine gathering speed—a tenacity realized by Skinner’s rolling-stop snare work at the end of the track. And during this large arc, the cycle, the song structure builds. This next verse section, a series of piano driven chords, highlights Lydell’s addition to Skinner’s one-time solo project.

“I don’t know any prophets,” sings Lydell, “Don’t ask me for my oil/That lamps been burnt out for so long/I’ve no more light to give.” The play here, as in many other places on the album is a skipping of connotations. From the inability to see the future to the non-existent incentive to invest in it, Lydell and Skinner, in a combination of ups and downs, replicate the cyclical feeling of a bubble bust economy, all dwindling resources and antiquated infrastructure. For this, the album is an emotive, LED beacon in our dimly lit times.

This is not to say it’s anything other than music pushing its boundaries both lyrically and technologically, as Lydell and Skinner are quick to point out.

“This is where music is going now,” states Lydell. “It’s crazy how many frontiers are being expanded. We can almost make music on accident with an app or something.”

With this development of computerized production there’s also a tension that emerges between the traditional role of performers and machines. Lydell understands this as an opening of potentials: “I don’t think you can lose the organic side of it, absolutely never. You can augment or improve on what you would be able to do with the bodies, with instruments.”

“It’s like limitless capabilities,” confirms Skinner, “when you’re playing electronically. We could go up there and just play piano and drums, but why be limited by how many people can touch an instrument? We physically play most of the parts on the record and play them off the laptop live because there are not six of us.” Then he adds, “I think we have trust issues as well.”

Despite the meager numbers, Paper Pistols is a dominant force live. They concentrate on making their concert performances engaging and entertaining.

“We can still be a dynamic band, not sound robotic or fake,” explains Skinner.

“I think there’s such an energy live. There’s a lot of energy on stage—presence. Because of that, most people don’t think, oh shit, half the music’s on a laptop. It’s not like we’re doing anything super unusual for these times. All bands have laptops in their bands now. Ten years ago when I started Evening Episode, that was unheard of. It was a challenge. We had adapters hooked up to adapters just to make it work.

“I don’t think I’ve ever been onstage where I’ve half-assed my performance,” Skinner continues. “For me, it’s a very therapeutic release. It’s such an outlet, and every show I try to push it more. I write my parts based on emotion, parts that feel cool.”

Writing, practicing and performing are vital for both Skinner and Lydell. Lydell even jokes that her daily stress about and frustration with the world dissipates after a good practice session or show.

These concerns, likewise, find expression in the album itself as a conflict between isolation and community, absence and presence. “I think that’s the theme of the record,” Lydell meditates in a sprawling thought, mirroring our complicated contemporary. “It’s hard to have an electronic album and have it be about getting back to this primitive state, or this more pure place, before the world was full of billboards and Internet homepages and anti-depressants, nicotine, alcohol. All the things we can use to escape from ever having to deal with selfhood because it’s really lonely. I think lyrically and thematically, that is the tension this postmodern world promises.

“When people used to be alone, they were truly alone,” she adds. “There was no way to communicate unless there were other people [physically present]. You had to be comfortable being by yourself. [Today] you can focus on your projected self because you can just do it constantly; what do I want to put in this status update so that people can see that I’m having an existentialist crisis and I need to solve it? You don’t have to ever deal with anything if you don’t want to. Or you can take a pill.”

These constant bombardments and over-simplified alleviations express themselves lyrically and sonically on the album. If Lydell drifts as a lyricist between loneliness and connection, then the minimalist verse structures and rich, decadent hooks similarly materialize these concerns through chords and melodies. The album has many moments of quiet tension and multilayered movements.

Lydell sees the work as a collaboration of sorts between opposing forces: “Ira and I have different composing styles. I really like tension. I think there are moments on the album where it’s really decadent, kind of luscious because of how much is going on; epic. Ira’s written film scores.”

Next to him, Lydell seems a bit more dynamic despite her “logical, monotone” self-description. She slouches back sipping tea in black and white wing tips, a long dress and sleeveless denim jacket. Both members casually detail what they hope to accomplish in the next year, which includes finding a manager and setting out on a small tour. Familiar friends, they joke quickly between each other. Their chemistry confirms the band’s back-story: Lydell canceled a return to Austin, Texas, to continue working with Skinner on Paper Pistols, alongside her other musical projects. Thus, the album came to be.

Describing how Paper Pistols came to be in its current incarnation, Skinner, who spends most days recording bands in his Midtown studio or running sound for various local venues, recounts, “After The Evening Episode, I didn’t have a desire to do a band again. I’d need to get a van, a practice space, book tours. It didn’t seem fun to do that again. Playing music with Julie has changed my perspective. It’s inspired me to actually start writing music. It’s an easier process with her because she moves quicker than I do, and she’s got so much energy. It’s different in a very positive way. ‘Astronaut Food,’ we wrote that and recorded it in a day. It sums up the record and so many of Julie’s views on the world. It’s a lonely ass song, too.”

“It’s just The Lion King. In a key too low for me,” smirks Lydell.

“Does that make me Simba?” asks Skinner.

“It does. And I’m still myself,” Lydell quips in return.

Aptly, for both musicians, “Astronaut Food” is an anthem of sorts. Over a music box sample and long sustained piano chords, Lydell sings, “The future looms not as bright for the most of us.” The final crescendo of the song is a surge of booming toms where Lydell repeats in a melancholic affirmation, containing hope and despair, “Deliver us from chemicals.” The song concludes with a four-part, gospel-style harmony that, in a song about literally being isolated above earth, desperately seeks transcendence.

Lydell explains the song, the possibility of a future, as a “conflation of living in the age of celebrity where everyone wants to have something special, look rich. But really we’re underemployed, making $9 an hour. There’s this gap. I think we’re really removed from reality in some ways, and it’s showing up on a bigger scale post-2008. There are so many complex systems, and I can’t even fathom it.”

The future looks similar to Skinner, a monoculture of sorts: “My realm of expertise would be the music business. If you listen to today’s radio, no, we don’t have a future, or at least not a very bright one. The influence that pop musicians have on the youth, artistic or not, it’s not positive. But, I think that’s because I’m old. People who are produced now don’t have an artform.”

Ultimately it’s clear that both Skinner and Lydell would prefer to stay on Earth playing music despite the chaos that surrounds us.

“I wouldn’t fucking go out in space,” Lydell laughs. “I would kill myself first. It freaks me out. I want no part of it. I’ll cling to a tree.”

“They have that thing right now,” says Skinner, regarding Mars. “You can sign up, but you can never go home. You live in a bubble. Who would do that?”

“People who like Burning Man would go. That would be my worst nightmare,” says Lydell.

“That’s what they should do,” concludes Skinner, “dump the Burning Man tickets and send them to Mars. I’m done with some Burning Man shit.”

There it is. Mars, loneliness, anxiety, austerity, decadence: Paper Pistols, Deliver Us From Chemicals, 2013. Transcendence, indeed. 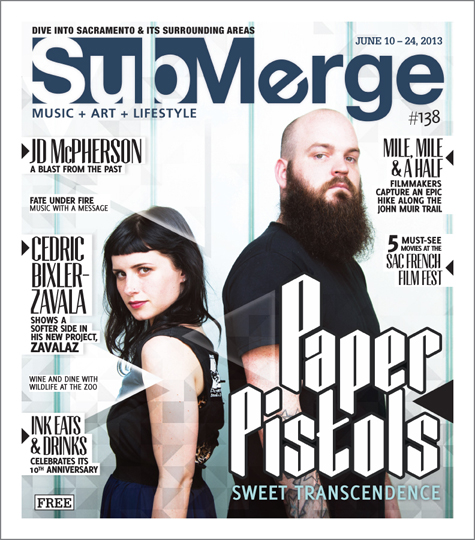