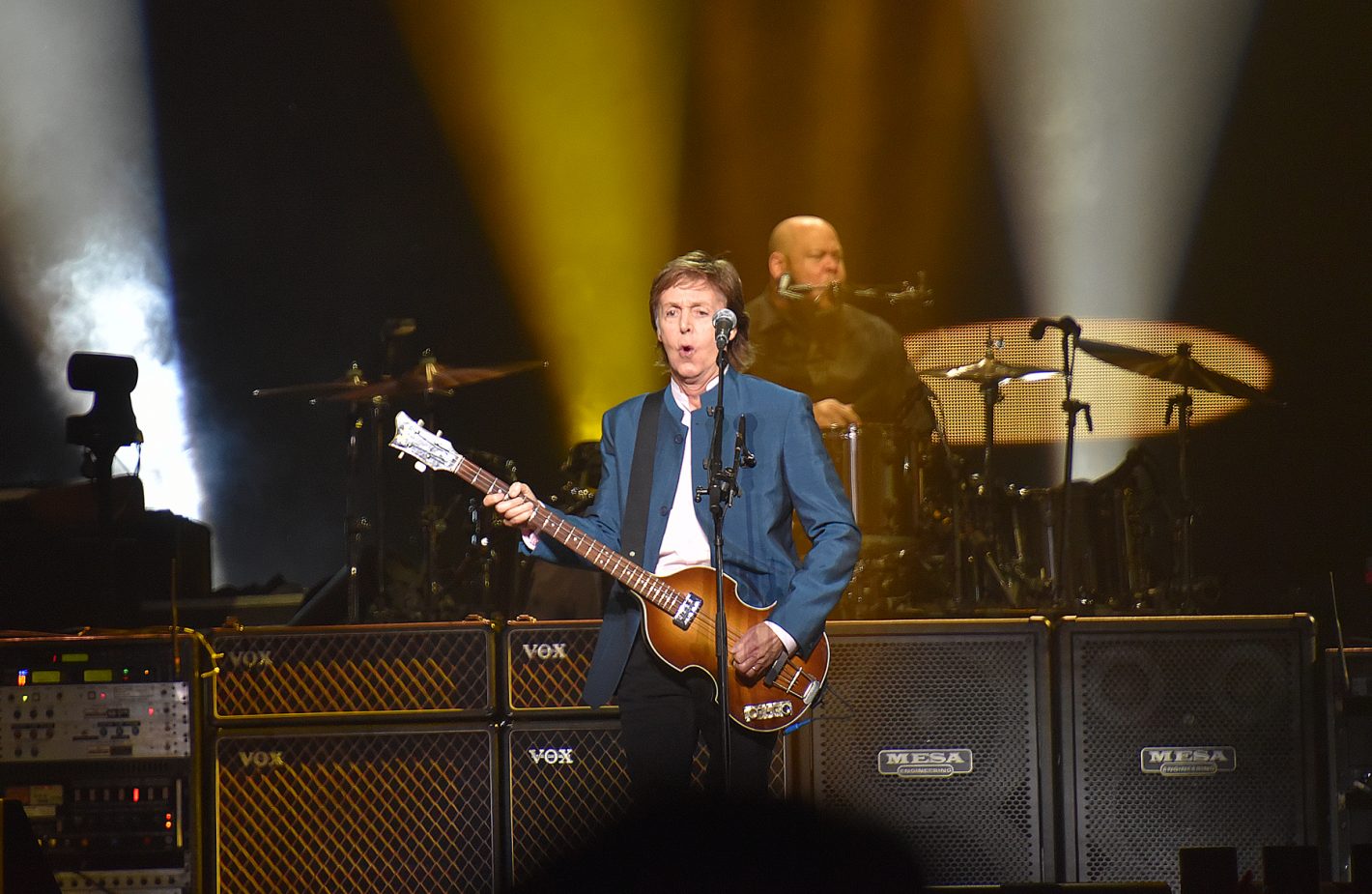 It may be the Sacramento Kings’ new home, but for two nights this week the Golden 1 Center in downtown Sacramento belongs to rock royalty. Sir Paul McCartney hosted the first of two concerts at the brand new, half-billion dollar arena on Tuesday night with his “One On One” tour, playing for nearly three hours to 15,000-plus people, sprinkling in tunes that spanned his entire career including instantly recognizable hits from The Beatles’ era, all the way up to newer tunes released just last year.

As the eager crowd trickled in, lines at the many local eateries like Paragary’s and Block Butcher Bar grew long, as did the lines at the vendor stands selling craft beer. So naturally this non-beer-snob bee-lined it to a cart selling “the cheap stuff” and snagged a couple tall cans of Blue Moon in about 30 seconds flat. As I took to my seats on the floor level, Kings owner Vivek Ranadivé was spotted in the crowd shaking hands and giving out hugs, clearly elated that his new arena was about to host a living legend in Sir Paul McCartney.

At exactly 8:15 p.m., after a killer DJ had played tunes to the filling seats, McCartney and his four-piece band took to the stage and busted into “A Hard Day’s Night,” the crowd erupting with applause and singing along with every word. After the third tune—another Beatles hit, “Can’t Buy Me Love”— the charismatic frontman stopped and said, “Gotta take a minute just to drink it all in.” At 74 years old, McCartney is as charming as ever, and while his voice may have had a hint of raspiness on certain tunes, he’s certainly still a beast of a musician, switching off all night from bass, to piano, to guitar, back to bass and then to ukulele, showcasing his many talents. 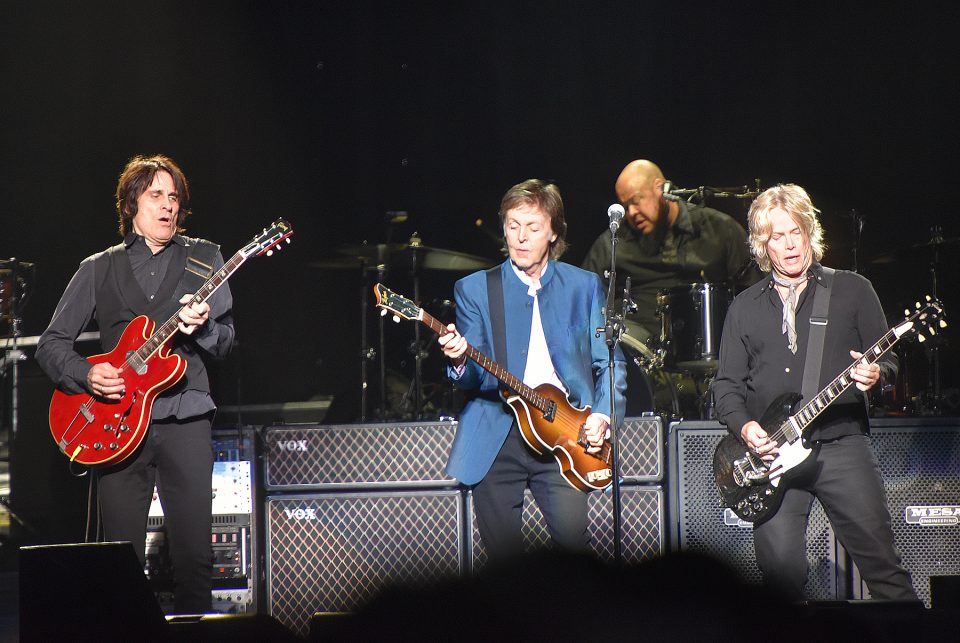 At some point after about the fifth or sixth song, it became apparent that this tour could just as easily have been branded “Story Time with Paul,” as he shared many personal memories from over the years, including a funny tale about when the late, great Jimi Hendrix opened a show with a ripping version of “Sgt. Pepper’s Lonely Hearts Club Band” just two days after its release. Other notable stories included bits about fellow Beatles John Lennon and George Harrison, both of whom received standing ovations upon mention.

For the next hour or so, McCartney and crew continued to rip through hit after hit after hit, including “We Can Work It Out,” “Love Me Do,” “Band on the Run,” “Eleanor Rigby,” “Ob-La-Di, Ob-La-Da,” “Let It Be,” “Live and Let Die,” “Back in the U.S.S.R.,” “Hey Jude” and an epic solo performance of “Blackbird” with McCartney on acoustic guitar standing on an elevated portion of the stage, lifted 20-plus feet above the crowd.

And that was all before the encore, even! After the band left the stage at around 10:35 p.m., the crowd demanded their return, and they kindly obliged. “Yesterday” was the first tune of the multi-song encore, which also included “Hi, Hi, Hi,” “Birthday” and closer “Carry That Weight.” At one point during the encore McCartney brought fans on stage who had been holding signs up all night, including a 12-year-old girl and her family from Truckee, California, and pretty much everyone on stage and the entire crowd were nearly in tears from the touching moment when Paul leaned down and kissed the young fan on the hand, sharing a group hug. 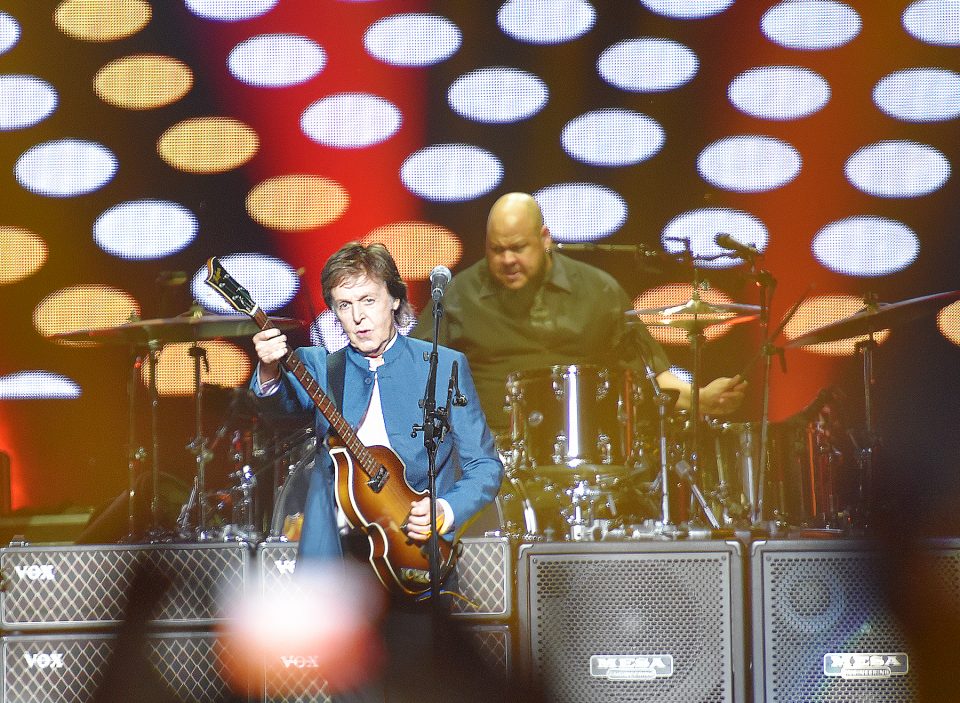 All in all it was a legendary show, but there are a few things I wish would have happened. For one: a live horn section, as hearing saxophones and trumpets played via keyboards just isn’t the same. Same goes for a string section. I think McCartney could have afforded to get some guest musicians up there for a song or two, although I did appreciate his lean, efficient four-piece band, which he waited till the very end to thank. “These boys can play,” he exclaimed.

As the crowd filed out onto the streets and I headed down to Coin-Op for a post-show beer and slice of pizza, I stopped and chatted with a friendly police officer who was smiling ear to ear. She asked me how the show was and mentioned that she and her many colleagues on hand to keep an eye out for trouble had a very smooth night, sans incidents.

Is Sacramento yet a world class city? I’m not sure, I think we’re still working on it. But was that a world class concert? You bet your ass it was, and I look forward to many more large-scale shows happening downtown in our fancy, new state-of-the-art arena. 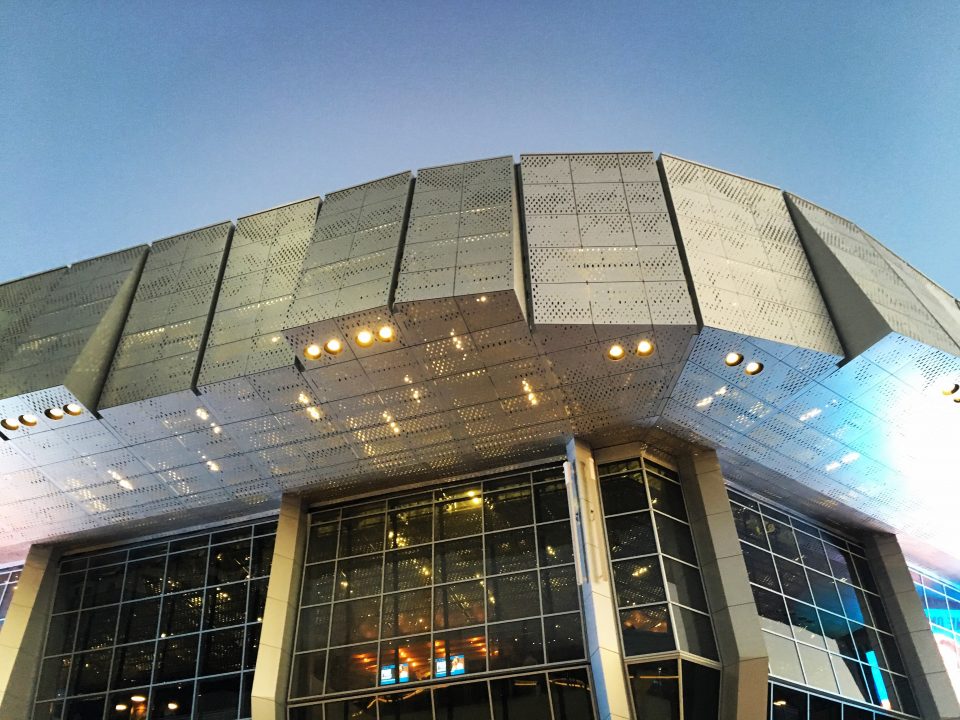