Placerville’s Element of Soul Getting What They Deserve

For some musicians the thought of living with fellow band members seems more like a detriment to not only personal space, but to the creative process itself. For the guys of Element of Soul, five members living together over the past two years in Placerville not only has strengthened their bonds as friends, but inspired a common spiritual search and heavily influenced their first full-length album, E.O.S,. set for release April 20. Wanting a more in-depth experience into the recording process, EOS turned to a couple of old school rock ‘n’ rollers, Mark Harmon and Bruce Spencer of the 77s, who double as producers at Blue Limit Music recording studios in Rocklin. With over a year in the studio behind them, the time is now for Mike O’Briant, Ben Moore, Chris Brown, Seth Ahern (aka DJ Zephyr), Eric Opdyke and Tristan Brown. But their next test is tightening their living quarters from a house on five acres to a 22-passenger van.

Moore and O’Briant remember being the only young men at their junior high school dances busting moves on the dance floor to Michael Jackson’s “Billie Jean,” so naturally they became friends. Later in life the two would also find themselves sharing vocal and guitar duties in EOS. The six band members ultimately found each other linked through Ponderosa and El Dorado high schools, first playing as a three-piece acoustic band with the addition of Chris on bass. But what truly solidified EOS as a band, according to O’Briant, was adding in Opdyke on drums, Tristan on lead guitar and DJ Zephyr on the ones and twos, completing the elements of their family in 2009.

“We’ve always wanted to do something that we enjoyed and understood that it was going to be out of pocket,” O’Briant explains. “You have to pay to play. You have to deserve it. And, we finally did it.”

When asked about categorizing their genre, O’Briant and Moore were reluctant in choosing just one. Sure, EOS brings the reggae feel to a live performance and yes, there’s plenty of acoustic elements, but what was to come, I wasn’t even prepared for.

“Right now, we have ourselves listed as reggae-folk-pop-rock,” O’Briant laughs. “Did I just blow your mind?

“The reason we say folk is because we have that acoustic aspect, but we’ve always been reggae and we’ve always put our own twist on it. More than anything, it’s the vibe and the energy that surrounds us with reggae. It’s pop because you can sing along to it.”

They started recording their 11-song album last March with Blue Limit Music’s Spencer and Harmon, who told the guys they were “a little rough around the edges” according to O’Briant. But that honesty is just what EOS were searching for when choosing a studio to trust with their first album.

“We definitely signed up for more than just an album. We wanted to do it our own way,” O’Briant explains. “We’ve always been about family and home. We found some guys who were interested in helping us grow, rather than just put an album out. So, that’s why we’ve taken a year and taken step by step. There’s no need to rush anything that doesn’t need to be rushed.”

With good reason. Songs off the album like “The Movement” capture what each member of EOS brings to a sound they have spent the past three years perfecting.

“Right now, ‘The Movement’ blows my mind. It was the first song that completely gave me chills and gave me that outside perspective,” O’Briant explains. “I just close my eyes and got chills. It made me feel amazing.”

The song’s light, acoustic introduction marks the times when the band was in its infancy as a three-piece, then layered with DJ Zephyr’s 10 years of expertise in sampling and scratching. O’Briant’s spoken-word style delivery on vocals is complemented by the accents on guitar by Tristan, which then introduce Moore’s approach to the microphone singing melodies within the chorus, his voice reaching higher pitches as the song progresses. Call and response are how these two vocalist split time within a song equally, all kept on beat by the jazz-style percussion of Opdyke and the groovy-bass lines of Chris.

Moore adds, “During the whole album, we definitely swing a lot of different ways with the feel of the songs,” he says. “It’s a lot of self-improvement, self-empowerment, stand up for yourself, speak your mind and love yourself.”

And this philosophy rings true for the whole band thanks to a little band meditation courtesy of their spiritual life coach Dr. Kim Clarity, who has visited the band at their home in Placerville to assist them through guided meditations. Moore says these meditations helped them find a stronger bond, open better communication with one another and overall learn to coexist peacefully. The band also took time out together in 2011 to attend a three-day seminar sponsored by Dr. Clarity, dedicating 12 hours each day.

“It was a nice realization of somebody that was a really positive and spiritual person who was telling us that we have good energy that we need to harness and use for a good cause,” O’Briant explains. “She even said for six grown males to be able to get together and not be at each other’s throats is a blessing and you need to be able to share that with the world. From then, it took on understanding.”

They live together. Perform together. And even meditate together. The members of EOS thrive off of their newfound oneness and have all become certified teachers of meditation. O’Briant and Moore adorn malas around their necks during the interview, Buddhist prayer beads used to count the number of times a mantra is recited while meditating.

“I think it’s a blessing that we’re able to communicate as well as we do and we’re able to get along. It’s amazing, and we thrive off that,” O’Briant explains.

Yet, the six who make up EOS also thrive off of their music, which they say, is the constant throughout their days with booking their first three-week tour from San Francisco to Long Beach, recording and releasing their album in addition to writing new material with plans to go back into the studio for a 6-song EP release.

“The biggest thing you can hope for in music as a band is to be unique and original. You don’t want to be classified, because that’s what makes it interesting and different. There’s no point to listen to a song that you’ve already heard by a million different artists.”

Moore adds to O’Briant’s sentiment, “[Our music is] full of self-expression. There are no limitations. I just play music that I feel inside me,” he explains. “Everyone’s already played everything. It’s just more self-expression. How do you express yourself?” 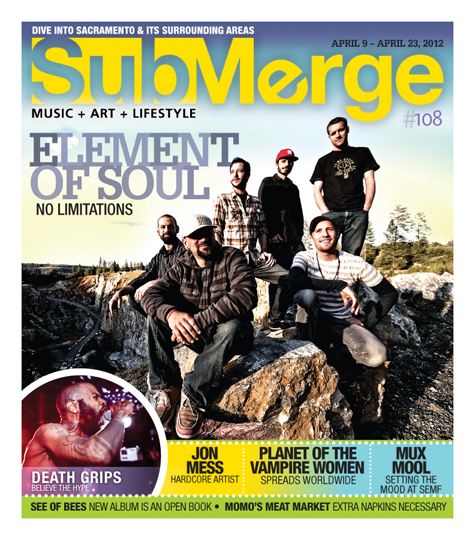 To follow the band’s travels on the road and get more information, go to Facebook.com/elementofsoul. Catch them live at Cesar Chavez Park on May 25, 2012 as part of Downtown Sacramento Partnership’s Concerts in the Park series. Also playing is ZuhG, Playboy School and DJ X’GVNR.