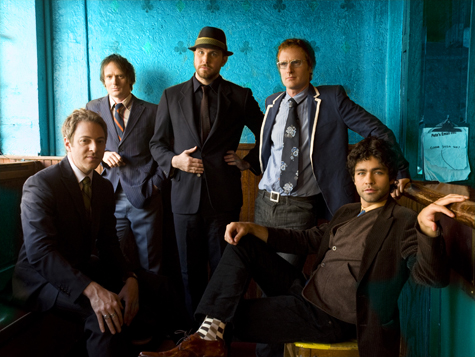 The Honey Brothers’ Blend of New Wave, Rock and Folk is Sure to Leave You Smiling

New wave occupies an area of the music spectrum that’s probably as far off from folk music as any other genre (accept for maybe grindcore). However, in the hands of The Honey Brothers—a New York-based rock band—you’d think the two disparate styles were best of friends.

Perhaps that could be attributed to the strong bond between the group’s members. Founding members Andrew Vladeck, DS Posner and Ari Gold conceived the Honey Brothers shortly after 9/11. Vladeck, Posner and Gold were best friends, but they never originally sought to start a band together. The Honey Brothers were instead born out of—as most good things—dinner among close friends.

“I love old folk songs, and I think I brought some songs and we started singing harmonies,” Vladeck explains. “It was just something we did as friends. As we learned a couple songs, we’d go out and sing them on the street for fun, and it was a way of bonding and healing from this traumatic event, and the ukuleles started playing along in that sort of way. It wasn’t a band, it was picking and grinning.”

The project began on its current course with the addition of drummer Adrian Grenier, whom you probably know better as Vincent Chase from HBO’s Entourage. On that show, Grenier plays a character who is always at the center of the Hollywood storm, the godhead of a group of close friends. In The Honey Brothers, he’s just another—albeit important—piece of the unit. He credits himself (and Vladeck backs that claim) with incorporating more of a rock sound into the band.

“I fancy myself the most irreplaceable drummer in the world,” jokes Grenier.

“I’d actually invited them to record at my home studio, and I was sort of instrumental in rocking their sound,” Grenier says. “They were initially just an acoustic trio with ukuleles, banjo and acoustic guitar. I’m responsible for putting some distortion and bass and drums into the sound, which I’m really proud of.”

The Honey Brothers are currently touring in support of their latest EP, Demonstration, which is available digitally on Amazon and on iTunes. The four-song EP was released back in June and marks a new direction as far as songwriting for the band. Submerge spoke with Grenier and Vladeck via conference call. Grenier was already on when we entered into the conference; he was doing some shopping so that he could make the rest of the band dinner before practice. Vladeck entered into the conversation later, and, as we would find out, was in some state of undress.

You joined the band in 2002. What drew you to them right off the bat? What were your first impressions of them?
Adrian Grenier: I was a fan before I was a member. I think they’re just delightful people and musicians. I was drawn to them immediately because of the good nature of the music, but also the really catchy, hooky style as well.

It seems to be a good marriage of rock and folk. The first couple of songs on the EP—”Demonstration” and “Moonlight”—definitely have a prevalent new wave feel. Did you think that would be a difficult marriage to put those influences together with the folk music?
AG: It was a natural progression, really. We had all these elements that we were toying with, and our influences are very diverse. Music always finds a way to fill in the spaces. We merged into this new sound.

When were the songs on the EP written?
AG: They are actually more recent. Our new sound has come about from all of us writing together and workshopping songs together, whereas the older songs were from a different era when we were in more of a folk-y place. A lot of these songs came out of the jam room.

Is it new for you guys to be writing together?
AG: Well, with rock instruments, yeah. A lot of times, the songs will come out of little jams that we’ll have, and then we’ll go backwards and flesh them out acoustically later. Whereas before, [the songwriting process] was strictly in an acoustic songwriting sort of way.

[It was at this point that Andrew Vladeck joined the conversation.]

Adrian and I were talking about the songwriting on the EP. He was saying that this was the first time you were writing with rock instruments. How did that affect your songwriting in particular?
Andrew Vladeck: That EP and our newer stuff now is a nice sort of departure. I think any band or any artist has to change in order to stay fresh—constantly searching and experimenting. This incarnation of writing together, starting each song as an exploration together and starting each song with more electric instruments and a whole band, has been great and has totally informed the style.

When you started the band with DS and Ari, you guys were basically a folk band. Was it difficult to incorporate the rock sounds into what you were doing? Adrian said he brought along a lot of the rock vibe the band has now”¦
AV: Right.

Was that something you were eager to incorporate into your music or was it difficult for you to adopt?
AV: Definitely eager. To take the folk instrumentation and figure out a way to adopt it to a rock band, and at the same time figure out a way get the rock band to adapt to these different influences, we’ve been forced to find common ground with all of our disparate influences and style. I think that’s what makes it fun for us, because it is different and it is challenging. Ultimately, I think we’ve been successful, just because we’ve been able to give each other a chance to try things out.

For Adrian, did Andrew’s more folk-y influences spark your creativity; and vice-versa, did Adrian’s rock influence do the same for Andrew?
AG: I fell in love with the band when they were mainly more folk-y, and it’s also in my range of appreciation. I think it was something I looked at it as an asset and a plus, because too easy bands can fall into mimicking whoever is the cool rock band of the day, and it’s nice to have elements that break you out of that mold.
AV: Well, it was interesting. When we first started the band, I was so busy with other music projects that I didn’t want to play anything but ukulele. I just wanted to be able to go to a gig and carry a ukulele”¦
AG: [Interrupting]”¦is this what you look like? I just walked into the house here, and I don’t know if you realize it, but Andrew is completely naked.
AV: It’s hot. The sweat has to evaporate. It’s convection [laughs]. Where was I? Adrian has been really encouraging. He could accept that we had this delightful folk thing going on, but he saw room for it to be more substantial. It’s been really nice to be encouraged as a lead guitarist and an instrumentalist by Adrian and the other Brothers. It’s definitely broadened horizons for sure.

Do you think that without Adrian’s influence that the Honey Brothers would have gone to more of a rock place?
AV: Well, certainly at the time, no. I was adamant about only playing ukulele, and we were doing this barber shop/folk thing with old folk songs. Yeah, it had this sort of Violent Femmes-y, punkish, rakishness to it, but we weren’t in any rush to go there.

What was it about the ukulele that made you so adamant about playing it?
AV: It’s just a whimsical, charming, endearing instrument. Ari and I both gravitated toward it because of its personality and that it was so personable. We wanted to have a fun, sweet, earnest time”¦
AG: It’s totally disarming. When you break out a ukulele, people aren’t threatened, and they let their guard down.

Before Andrew mentioned he had other musical projects going when he started the band, and Adrian, you have your work as an actor. How much does your acting inform your creativity when it comes to music?
AG: I look at all of the creative arts as coming from the same place of sharing ideas, so to me, I think they’re so related. People ask all the time, “If you had to give up one, which one would you give up,” and the answer is, “Luckily, I don’t have to.” They’re all part of the experience. I always want to bring filmmaking aspects of my life into the band, and vice-versa, use the music to shape films and that sort of thing. It’s important to me to stay creatively active and open to any way you might be able to merge the various arts.

You all chose names as members of the band. Andrew is aka Dory Honey and Adrian goes by Honey DuContra in the group. What made you pick your particular moniker?
AV: Adrian, tell me if you agree, but that is a remnant of our beginnings as a folk, street corner, old time act. It was fun to reinvent ourselves and enter the realm of fantasy a little bit more. While we do try to retain that, because it is fun to be able to dip into a mythology, we can accept that everything is a little bit different now. We can accept that we’re one with our alter egos now.
AG: I think that we are still wrestling with our alter egos, and they always come out and shine sometimes, but it’s nice to be able to live vicariously through another persona—especially when you’re onstage and you don’t have to apologize. You can just let loose. I think that’s one thing that our music does, if I may, is it gives people permission to let loose and not really care about acting cool or anything. It’s just about letting it all go.

Adrian, your moniker is the only one in which “Honey” isn’t the last name. Is there any reason behind that?
AG: That’s because, and it’s actually come back to haunt me, I have a tendency to be a little contrarian to mix things up. DuContra is a nickname that I’ve had for a long time. I think it comes from Portuguese. It means contrarian, so naturally, I’ll be Honey DuContra.

You mentioned before that you were writing stuff. Is there a full-length Honey Brothers album on the horizon?
AG: We’re in the process. In fact, I’m cooking dinner. We’re going to eat, and then we’re going to get to work. Right, Andrew? Put on some clothes and get down there. 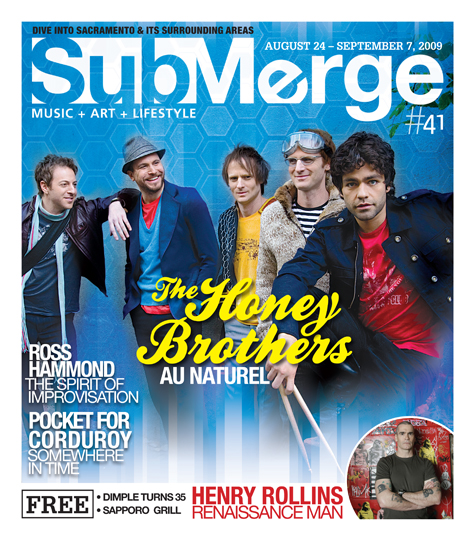