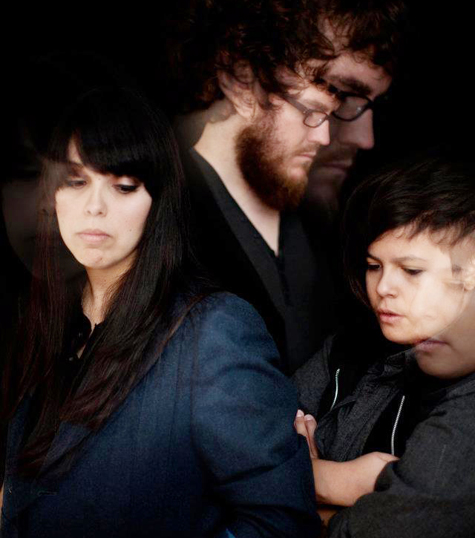 Sister Crayon Steps It Up Further on Debut LP 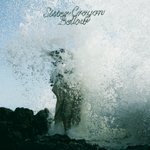 It was a gray and windy afternoon on the beaches of Malibu. A tidal wave warning was in effect, but there local band Sister Crayon stood, fully-clothed, sharp shoreline rock at their ankles, as photographer Eliot Lee Hazel barked orders to capture the frozen chaos of crashing white caps for the band’s debut album art.

Lead singer Terra Lopez slipped during one shot, cutting her leg, but Hazel ran his shoot like a drill sergeant. “He just said, ‘Get up. Don’t smile. Don’t look at me,’” Lopez said. “Well, he’s a sweetheart, nice guy, you can sit down and talk to him, but when he’s taking photos he is so intense.”

As absurd as it feels to the members of Sister Crayon, Lopez and drummer Nicholas Suhr spoke of the shoot as one of their most memorable music experiences–even though it had little to do with music. Along with Hazel’s artwork, the band has a high-def music video done by celebrity photographer Robert Ascroft. Browsing both photographers’ websites, perusing the tastefully gratuitous images of Devendra Banhart, Usher, Mariah Carey, Edward Sharpe and Brad Pitt, Sister Crayon will be the first to tell you how privileged, yet out of place they feel. Are these the last remaining minor moments of Sister Crayon before they receive Coachella bookings and Japan tour offers?

In the next few weeks, the band is playing humbler venues like Townhouse for the Sacramento Electronic Music Festival and Luigi’s Fungarden for the Bellow album release party. So our indie darlings have yet to grow too big for our sleepy city. Lopez looks like a siren Viking vixen in the video for “(In) Reverse,” but when I met with her and Suhr at Mondo Bizarro (formerly Butch & Nellie’s) for an interview, she was back in her Midtown garb, a second-hand green army jacket and jeans–the Lindsay Weir of Freaks and Geeks look. She’s still the same shy songwriter, fronting a gloomy pop act that seeks inspiration in the lonesome despair of poets like Jean Genet and Fernando Pessoa.

The Bellow sessions scattered across the span of a year and a half. The newly realized lineup of Sister Crayon crammed in 18-hour shifts at The Hangar with engineer Scott McShane, who described the process as “tense” and a “guerilla recording style.” McShane produced the first Sister Crayon EP, Enter Into Holy (Or)ders, and the band never entertained the thought of working with anyone else. “Recording already is a really intimate thing. We bond so well with him. He gets what we’re trying to do, even before we understand it,” Lopez said.

“He’s able to throw out ideas that’s not in an insulting way. It’s just full-on experimenting and you know that it’s for the best. He pushes us to succeed,” Suhr added.

The tension came from the hourglass pressure of paying for studio time and the unfamiliarity of having a new drummer join two weeks prior, writing his parts on the fly. Suhr was not a complete stranger, knowing Lopez from her stint in The Evening Episode, but he and Lopez talked of the anxieties surrounding a debut full length. “We were zombies. We’d spend 18 hours in the studio and you can hear it in the record,” she said.

Originally, Bellows was intended to be a five-song EP, written by Lopez and synth-keyboardist Dani Fernandez, with “I’m Still the Same Person” being the only pre-released song to make the album. But once the band wrapped recording those five songs, creativity was running high and five more songs were written collectively. “Scott kept telling us there was a lot of tension on the record,” Suhr said. “If you know what was going on at the time it makes sense. There was a lot of time spent coming to an agreement on things, but whenever we’re writing together there’s no awkwardness. It was easy to go into the next five songs with an open mindset.”

Indeed, the settling in is brazen and culminates with a spacious piano ballad called “Ixchel, The Lady Rainbow,” in which Lopez’s visceral croon soars over a piece written by former member Genaro Ulloa. “Ixchel” was the last song the band recorded, a one-take recording done well past the midnight hour. “We did it live tracking,” Lopez said. “He was in the other room and I was in the main room singing. We could see each other through a little window, but that was it. It was the first take and it was incredible. I know it sounds corny, but there were tears in everyone’s eyes. We were all exhausted. Even Scott had tears in his eyes.”

Suhr added, “It’s one of those songs. Every other song on the record we did multiple takes because we felt we could do better. At the end of that song, everyone was just like what the fuck. It’s one of those songs where if it didn’t sound like that, with the imperfections left in, it wouldn’t have worked.”

The gloomy pop instrumentation informed by the troubled words of dead poets is an appropriate setting for an album titled Bellow, but Suhr said a lot of the mood is owed to McShane’s guidance. “I heard the five songs written before I joined, but the mood had changed through Scott’s ears.” Lopez said his touch is most prevalent on “Here We Never Die and “(In) Reverse” as he took the band’s ideas and focused them into a cohesive sound.

In addition to McShane, the Sister Crayon sound, most notably the lyrics, is in homage to the writings of Fernando Pessoa, a 20th Century poet and literary critic. Lopez only admitted her obsession with Pessoa’s work. She has a Pessoa tattoo and her Pug’s name is Ophelia, after Pessoa’s secret crush to whom he never confessed his love. “It’s the despair,” she said. “It sounds dramatic, but he was such a lonely individual. He was very mysterious and obviously people are drawn to that.

“I think that is a huge part of Bellow. ‘Here We Never Die’ is my talking to a lover in that way. The despair and sadness that he wrote is so sad that I can’t even finish one of his books. I have to read a sentence a day sometimes because it’s so much. It just floors me. I have no option when it comes to his presence in my music.”

As intense as Sister Crayon is sonically and visually portrayed, Hazel’s insistency that the band stop smiling as the chilly Pacific waves capsized on their heads speaks of the band’s unbridled joy in its work. As arresting as “Ixchel, The Lady Rainbow” is, Bellow closes with “Souls of Gold,” a cheery campfire sing-a-long with a blasting brass section and woozy synths. “We’re always such a serious band and a lot of our songs are really dark,” Lopez said. “I do like that the album ends on a lighter note than what it could have been.”

See Sister Crayon live at their release party for their new album Bellows at Luigi’s Fungarden on Feb. 19.