From Gospel to Gumbo • The Scriptures of PJ Morton 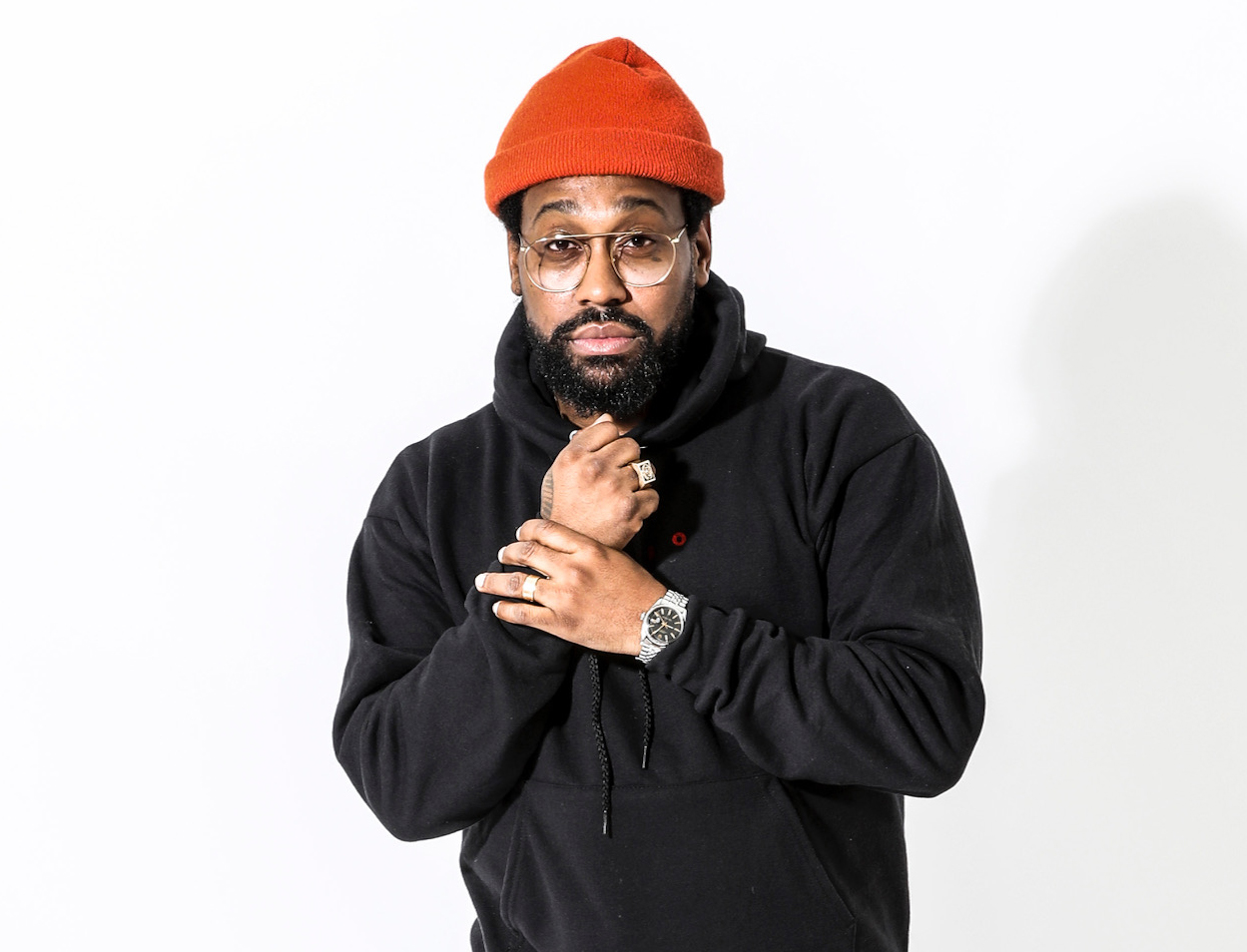 The best kind of gumbo is one made with fresh ingredients, a plethora of flavors, is slow-cooked and highlighted with a soulful kick to create an authentic blend of southern stew. For New Orleans-born PJ Morton, his music is truly an artistic interpretation of the dish that originated in the heart of the Big Easy.

Morton’s touched many facets of the music industry; he’s toured with Erykah Badu, collaborated with Lil Wayne, is a full-time member of Maroon 5, recorded a Grammy-nominated track with Stevie Wonder and is now traveling the United States on a tour showcasing his recently released Christmas album, Christmas With PJ Morton. So how exactly did he get to this point?

PJ—like his father, famous gospel singer and pastor, Bishop Paul S. Morton—grew up with a passion for music that intertwined with faith. He began as an artist singing gospel music in the church that his father was the pastor of.

“It helped me understand music and to understand people and performing, it was all positive for me and set me up for where I am now,” Morton said over the phone prior to performing on the first night of his tour in New Jersey.

This passion for music was ingrained in Morton from an early age.

“I had been in school all my life for music,” he said. Which is why he went on to major in marketing at Morehouse College in Atlanta, Georgia instead of pursuing a degree in music. “Coming from New Orleans, where music is studied so much, I wanted to keep it an organic thing and I didn’t want to learn how to play music … I was already fully into music and I felt like marketing was something that I really wanted to learn about. I knew that would be more valuable to me as an artist.”

In 2002, while still in his junior year of college, Morton found early success, helping produce India.Arie’s Grammy-winning R&B album, Voyage to India. After graduating in 2003, his music career truly began taking shape. His first time touring was with Erykah Badu for her album Worldwide Underground.

“As soon as I graduated Morehouse, [Badu] needed a keyboard player that could sing and play some guitar and I did all of the above,” he said. The tour kicked off in Morton’s hometown of New Orleans and by the time the tour was finished, Badu’s talents had inspired PJ to begin working on his own music.

Following Badu’s tour, Morton started working in Atlanta with Jermaine Dupri as a member of his writing production team. During this time, he worked with a variety of established artists of the R&B and hip-hop community: mainly Monica, the group Jagged Edge and LL Cool J. This experience allowed him to grow as a producer and writer while developing important relationships in the industry.

These crucial years during and after his time at Morehouse College propelled Morton toward his “underground solo career,” as he described it. After moving to New York shortly after Hurricane Katrina, he released his debut solo studio album Emotions in 2005, and later, Walk Alone in 2010. These albums were applauded by music critics within the R&B genre, but never gained the commercial success that he seemed destined to achieve as a solo artist.

Later in 2010, Morton would receive a life-altering phone call from Adam Blackstone, who had just become the music director for Maroon 5. With three shows left on his Walk Alone tour, Blackstone asked Morton if he would fly out to Los Angeles for an audition. Without hesitation, Morton cancelled the remainder of his tour and made the flight west for what would be his first and perhaps most important audition to date.

Coincidentally, this was the first time Maroon 5 had ever held an audition, looking for a keyboard player and background singer with soul.

“We just kind of vibed out and I think it was more about a personal connection,” Morton said. “We connected on a different level.”

The timing couldn’t have been better; Morton said that his solo career made him “kind of burnt out from grinding” and that joining Maroon 5 re-energized his career with new life. Two years later, he became a full-time member of the group and eventually helped write and record Maroon 5’s Overexposed, which was released in June 2012.

If you examine Morton’s collaborative career up until joining Maroon 5, it’s clear that his ability to transcend genres is what separates him from his musical peers.

“I feel like I’ve had nine lives, “ Morton said.

Growing up, Morton listened to artists across all genres—his mom introduced him to The Beatles and James Taylor; his father raised him with gospel music, and his love for R&B (mainly Stevie Wonder, Donnie Elbert and Al Green) expanded upon his musical diet to produce a soulful appetite.

“I was always open to whatever made me feel something, which allowed me to branch off to these other genres comfortably because it was genuinely who I was,” Morton related.

But while authenticity and openness have always been at the heart of Morton’s life, it wasn’t an easy path for the musically gifted son of a preacher.

In 2009, just before joining Maroon 5, he wrote a book titled Why Can’t I Sing About Love? The Truth About the Church Against Secular Music. In this book, he challenges an age-old argument: that religious artists who pursue musical careers outside of gospel music aren’t doing God’s work.

“The same fight Aretha [Franklin] was fighting was the fight I was fighting and the same fight that Sam Cooke fought 40 years before me was still going on, so I said I think it’s time to properly address this,” Morton explained.

The book proved to be a liberating experience for Morton, who received quotes from Aretha Franklin and Al Green for the work, as well as a contribution from his father who wrote the book’s foreword.

“God is love … why limit music to one genre that’s supposed to represent him,” Morton said.

People still thank Morton to this day for writing about this difficult topic, but to him, it was a necessary chapter in his evolution as a man and as an artist.

After working on Maroon 5’s 2014 album V, and releasing his own album New Orleans, which featured the Grammy-nominated lead single “Only One” with Stevie Wonder, he moved back to New Orleans in 2016. That year, he launched Morton Records, a label that he envisioned to be the “New Orleans Motown.”

In 2017, Morton released his next studio album, Gumbo. In an interview with AM New York he talked about the naming of the album.

“I wanted to grow as a songwriter and talk about more things … about where we are in the world today, the tension, how divided we are as a country. It kind of felt like I was dumping a bunch of subject matter together and I made it in New Orleans so it sounded like Gumbo to me,” Morton told the outlet.

I asked him about that interview and how he remains positive despite the tense political climate that seems to have worsened since that quote.

“It’s counterproductive to be negative,” he explained. “I know it’s heavy times; I know it’s rough, but we’re going to be OK. It’s been worse actually … we’ve been here before and actually came out victorious, so I just have to believe that we will again.”

Morton’s confidence in progress is rooted in his knowledge of history, citing artists and civil rights activists Nina Simone and Stevie Wonder as sources of inspiration for using his platform to discuss socially conscious issues.

“Anything prior to Gumbo I was always talking about love and relationships, but I felt a pull. I need to address this and let people know that they’re not alone in these thoughts,” Morton said about the evolution of his message.

Gumbo was critically acclaimed throughout the industry. Not only was the work nominated for a Grammy as Best R&B Album of the year, but the collection’s first song, “First Began,” was also nominated for a Grammy award. The opening song is a soulful and beautiful representation of Morton’s ability to sing with emotional honesty. The album quickly changes pace with “Claustrophobic,” a bouncy hip-hop track that discusses his fear of being trapped in the small minds of those associated with mainstream music. Throughout the album, he goes back to his religious roots with several tracks including the aptly titled “Religion,” which talks about people using religion to justify the unjustifiable.

But when it comes to the messaging of his music, Morton said that he likes to keep it organic.

“I don’t know from one album or one song to the next what I want to say, it’s what I feel at the time is necessary to say,” he said. “I just want to be who I am in the moment and continue to evolve and be fluid.”

It feels like fate is a big part of Morton’s life—the timing of his early tours and solo albums revolving around Hurricane Katrina in New Orleans, his audition with Maroon 5 and how that reinvigorated his solo career, working with Stevie Wonder and speaking with influential civil rights activists prior to the polarizing political landscape of late; all of this has led back to the thing that he grew up with: faith.

His brand new album, Christmas with PJ Morton, gets back to his roots of religion and positivity. Morton is performing the album for the first time ever on his current tour.

This time around, his version of gumbo won’t be served as a feature to other artist’s main course, but instead will be his own entrée to deliver to the masses. Grab a spoon, grab a bib and don’t forget your dancing shoes for Morton’s take on “church in the club.”

Don’t sleep on what’s promising to be a fantastic night of live music with PJ Morton Tuesday, Dec. 4 at Harlow’s (2708 J St.). Grace Weber opens. Doors at 6:30 p.m., and show starts at 7 p.m. All ages are welcome, and tickets are $20 in advance and $25 day of show. Visit Harlows.com for more information.