Every Place Has a Sound, Portugal. The Man Has Many

Not What You’d Expect

Long before Sarah Palin stepped into the national spotlight and gave the small town of Wasilla, Alaska a name, John Baldwin Gourley of Portugal. The Man called it home. “It’s such a sheltered place,” recalls the singer/guitarist/songwriter. “It’s so very much a part of the United States and so very different at the same time.”

Gourley admits that growing up in such a non-traditional environment has had a strong influence on the music he writes and the action he takes. “It took leaving the state and then coming back for me to say, ‘Fuck man, we just need to make a band that’s fun for us. We need to make music that we want to make.”‘

It’s safe to say that for the last few years Portugal. The Man has indeed made the music they want to. Their three albums (and multiple EPs) sound like they came from different bands, an obvious consequence of the group’s insatiable hunger to create something unique, to constantly tread new waters. Their latest effort, entitled Censored Colors, is 15 tracks of genre defying art-rock that has two well-defined movements and an “intermission” in between. It’s intended to imitate the experience of listening to the two sides of a vinyl record, something that Gourley prefers when listening to music. “Everybody has moved into the stage of MP3s and disposable bands and disposable music,” he admits. “It’s so much better to have something that you can listen to as two separate pieces. It’s more like having two albums to listen to.”

Currently in the middle of a two-month-long headlining tour, Gourley graciously took some time to talk with Submerge about the tour, Censored Colors and the recent election.

Where are you at this exact second?
We’re in Chicago. I just went into a shop to get out of the cold. It’s really fucking cold.

You’re probably somewhat used to that being an Alaskan boy and all.
[Laughs] You know, the thing that’s so funny that I always try to explain to everybody that nobody seems to get is it’s so much different, it’s such a different cold. The lower 48 is kind of a wet cold, more than the Alaskan frozen north. Dry cold is so much easier to deal with.

How has the headlining tour been treating you so far?
It’s been going really well. Earl Greyhound and Wintersleep are both really, really great bands. It was really good that it ended up being that way. You never really know when you go on tour. I mean, how many bands have we listened to over the years that we thought were really great and then you go to a show and it’s like, “Well fuck, not good!”

Tell me about your latest release, Censored Colors. It’s different from anything you’ve done in the past. Did it turn out the way you intended it to?
I don’t think a single record we have done has ever turned out the way we expected it to. It’s a good thing. We go through everything making a pretty conscious effort to make a different record each time; that’s important to us. But yeah, it came out the way it was supposed to. It was a record for family, and it was about respect and community and just about life, you know?

And you released it through your own label, right? It must feel nice to be free of a record labels constrictions and own your rights to everything. Will you continue to self-release stuff?
I suppose so. It kind of depends where everything goes. We never like to set any goals or expectations [laughs], we’re just going to do what we’re going to do. We’ll always make records and hopefully do at least one a year as long as the music is there.

Do you think it’s important to put out music that frequently?
I suppose it is. When you’re in a band, that’s what you do. You can’t expect to get better and progress if you’re putting out a record every two years. You can write an album based on a week of your life. You don’t need that space and that time. It’s just what we do. With everything we do, we always want to work hard at it. We’re already planning on going into the studio this December and January to do a new record. Our goal has always been to just make music and keep it moving. Hopefully we’ll get two records out next year, I would love to do that.

I want to switch gears for a second. You’re an outspoken political person with strong views; tell me how you feel about the results of the election?
I’m so proud. I feel like thing’s could go so well. He’s [President-Elect Barack Obama] really just got to take this and run with it. There’s no looking back. He definitely does need to bring the country together somewhat by just proving himself, he’s just got to get out there and do it. He’s got to just say, “Fuck it” to everything that’s going on right now and take it all in. He’s got a lot of work, you know? You can’t expect it to just happen overnight. It was definitely a huge step for the world.

Agreed. To wrap things up on a lighter note, you guys are constantly touring all over the world but do you think Portugal. The Man will ever actually play in Portugal?
[Laughs] Oh man, I imagine at some point. For some reason we haven’t had the opportunity. We definitely got to find some time to do that. 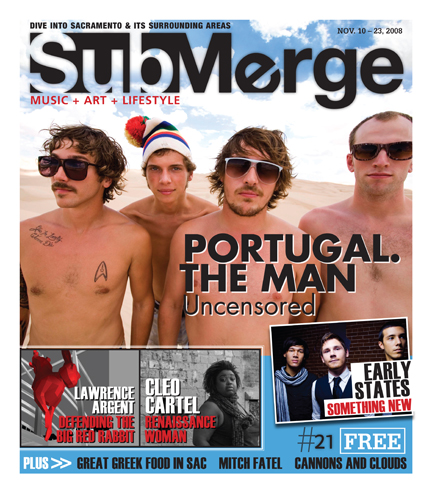