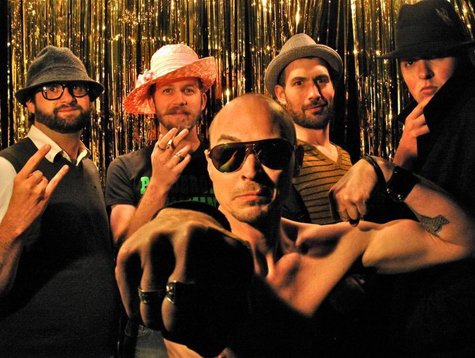 It wasn’t that long ago that a batch of pissed off, combat-booted, plaid-clad debutantes from the Pacific Northwest began creating racket in the garage, siphoning the marrow of blues, classic rock, psychedelia, punk and metal into a new kind of artistic fibula. The media called it grunge, but it was nothing if not a clean break from what had become a stale but ever-steady flow of rock-lite. To say that Sacramento’s Prieta is resurrecting the ghosts of grunge’s past would be wrong, and it would be incredibly stupid to boot. Which is why I didn’t do it”¦sort of. While the band has garnered (not unduly) comparisons to (insert genre here, anything but grunge) pioneers Soundgarden, the band isn’t out to emulate or revive a scene that died out pretty much exactly when it should have.

Still, Prieta’s bag of tricks lends itself to the aforementioned pillars of rock ‘n’ roll. Their new EP, Sleep All Night (recorded at The Hangar with band friend Joe Finocchio, who works out of Different Fur Studios in San Francisco), is a dirty drive down memory lane, shifting gears from first wave sass-rock like The Stooges, to second-wave desert metal like Kyuss. Sounds great, right? It is. Simply, they’re a rock band, and they have their proverbial shit together.

The band took some time out of their no-doubt busy schedules to talk to Submerge about, well, basically everything having to do with their band.

There’s an unmistakable late ’80s/early ’90s spin on blues, classic and psychedelic rock of the ’60s and ’70s in your music. It seems to remain almost exclusively true to that sound, with little modern embellishment. When you began, were you reticent to experiment with that to modernize it?
Alex Ayers (vocals): I assume you are talking about grunge. Which is a common thing mentioned to us, but none of us are huge grunge fans. We like select albums here and there, but that goes for any and all genres/decades. We have never even addressed the question of modern vs. vintage. There was never any expressed decision made in regards to our music. When the band was forming we would just sit around and jam out things that were easy to work as a group on. Our first batch of songs was absolutely not classic, so when the “classic” question comes up, we are kind
of dumbfounded.
Brian Breneman (drums): The part of the grunge thing I can understand is this: a lot of those bands took a decidedly less flamboyant, more back-to-basics approach to blues-based rock than what had been popular up to that point in time. But a unique take on the blues is nothing new. Bands from Deep Purple to Soundgarden to Queens of the Stone Age have all tapped into the same attitudes and musical conventions. I feel like we embody some of those principles.
Mat Woods (guitar): Everyone still likes Sabbath. Everyone still likes Creedence. If there was any decision made it was more along the lines of, “Let’s emulate bands that did a great job,” not, “let’s emulate bands that are doing new things.” But that is still a big “if.” All of the things I have written have been written because of something I was feeling or something I wanted to feel, and it really ends there.

In what ways did the band progress musically, and in your approach to recording, with your new EP, Sleep All Night?
AA: Preproduction: a concept we have to work harder and harder at every time we go into the studio. The goal of every recording is to, for lack of a better word, embarrass the last recording. We are learning right now. Yes, we perform. Yes, we record. But until we get label support, we are
at school.
BB: I think we’ve managed to make our sound even more focused. We were really trying to make a record that sounds like us playing in a room together. The less production, the better. Our heroes didn’t need a lot of technology to sound good. They wrote great songs and performed the hell out of them. From a recording standpoint, we just need to capture it.
Ian McLachlan (bass): All in all, it is the same as it has always been for me. As far as the new recording goes, I tried to not nit-pick the bass lines; work more off the cuff and allow a little more experimenting with amps and basses. We got to use a lot of different equipment.
MW: We figured out that the less we internalized things and talked about them the easier things were. We don’t talk about songs, we write them. Our most solid songs were written surprisingly fast.

What do you feel sets you apart from the retro rock revival, so to speak, so inherent in bands like Wolfmother, whom you’ve been compared to. Is your music meant to be an ironic homage?
AA: Not at all. As we have said before, our music is a result of many things; a sense of revival is definitely not one of them. If there is any irony around our band it is the fact that we keep getting compared to rock revival bands that we don’t even know about. It may seem like a small thing, but look at us. Only one of us has long hair, one of us types in an office all day, none of us have “style” we cling to. There is no image or sound we are going for and that right there is enough to set us apart from other dudes, other dudes that shop exclusively at their father’s closet. It isn’t us.
MW: Seriously. No frills. We are just an honest-to-god rock ‘n’ roll band.
BB: It’s just about the songs. I’m here to give something back for all the music I’ve enjoyed throughout my life. Sometimes it can be kind of a turn-off to see bands actively encourage people to not take them seriously, to stand behind a wink and not be giving 100 percent of themselves. I think it takes far more conviction to be able to honestly say that you don’t need to control how people understand your music. If it is real, then people will connect with it.

What has been the band’s response to such a quick ascent into the local spotlight?
AA: It has been quick, I agree, but we are nowhere near the spotlight. There are thousands of people in this town alone who have no idea we exist. We’re fuck all at this point.
BB: Thanks to all our fans! We’re glad you like it. It’s only going to get better.
IM: Any ascension is completely welcome to me. I am ready for it because I have been in a lot of bands that have received little or no attention. It’s not like it fazes me in any way. I have been hungry for this for years.
MW: It’s been a little unnerving. People think we have been around for years when we haven’t. We are just beginning. We’ve got a lot of shit to do.