When I heard about this show I was really excited for several reasons: First, I hadn’t seen some of the bands in almost 10 years; second, it showcased a wide cross-section of Sacramento punk rock talent; and third, it gave me a reason to get out of the grid and check out a new all-ages venue. So I made the trip all the way out to The Shire Road Club. 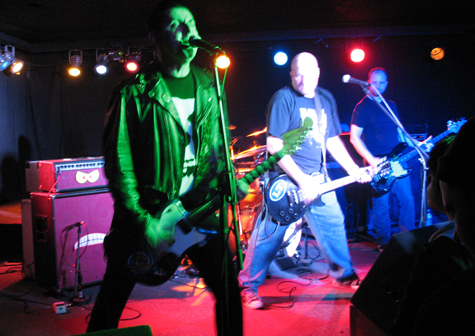 First up were The Knockoffs. The band consists of guys from other great Sacramento punk bands The Secretions and The No-Goodniks and Berkeley, Calif.’s Mr. T Experience. Right out of the gate these hometown heroes hit us with three-chord punk that would do The Ramones proud—songs chock-full of sing-alongs, power hooks and quirky choruses about girls. I found the drummer of this band to be very interesting; in fact I couldn’t take my eyes off him. Imagine if The Rock stopped taking steroids and played with the exact facial expression/drumming style of Ringo Starr circa 1964.

Next up was the pop punk trio Boats! The set started out with some equipment malfunction that caused the guitar player to miss some notes and forget chord changes. Anyone that has played in a touring band understands every show can’t be the best one you’ve ever played; you just move on and play better next time. These guys did have some catchy tunes. Similar to something you might hear on a late ’90s Screeching Weasel album, fun goofy three-chord punk. The bass player David blew me away, honestly one of the best young punk bass players I’ve seen in a long time.

The third band, and arguably the best band on the bill, was Pressure Point. I really don’t know what else to say about these guys, they are just fantastic New York style hardcore punk. Apparently I was not the only person who felt this way because the previously motionless, expressionless crowd burst into a wild circle pit, fist-flying singing along to all the songs. These guys brought a little more musical complexity to the night, more than five chords per song and some flashy lead guitar. Pressure Point brought out an interesting observation; punks, skinheads and hardcore kids attended this show. Not a lot of other cities can boast such unity. 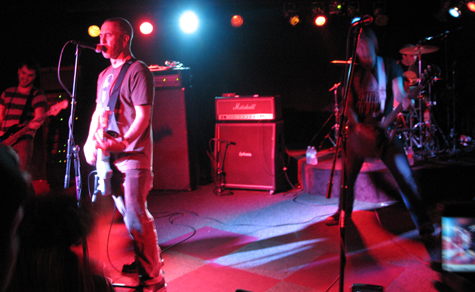 As soon as Youth Brigade hit the stage I was immediately unimpressed. Yeah I know, punk legends, been around forever, whatever. For some reason Shawn Stern (lead singer) had a problem with the majority of the audience not being born before his band started. He seemed to imply that we weren’t there so we don’t “get it.” This is the equivalent of Boss Hogg telling me I don’t “get” Dukes of Hazard because I wasn’t born in the south. I don’t see this in any other genre of music but for some reason some old punk rockers are ageists. Sorry for being younger than you. I don’t know what you want me to do about it. If you’ve seen the classic punk documentary Another State of Mind, you’ve seen modern day Youth Brigade. They still play teeth grinding aggressive ’80s style barking hardcore punk. Shawn is still singing about politics and playing the same power chords, I didn’t get the impression that he wanted to be there. He acted as if he was going through the motions, to get paid. 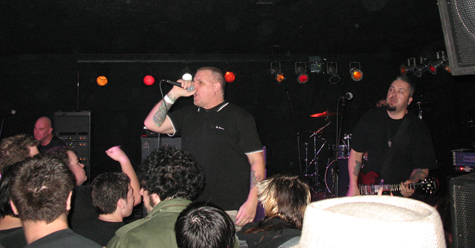 7Seconds was the last band to take the stage, they immediately kicked down the doors and tore the roof off. They played fast, loud, and hard. I was surprised Bobby didn’t break a string the way he slammed on that guitar. Steve Youth played about as complicated of a bass line as you can fit into a blazing fast punk song. I loved Kevin’s vocals, that distinct higher range is one of the things that has made 7Seconds so recognizable over there career. What an extraordinary band, they are celebrating there 30th anniversary so get out and see them!

All said and done it was a good night with very talented bands. It was a good reminder of what I love about punk rock. I hope Shire Road Club has more of these shows in store for us.