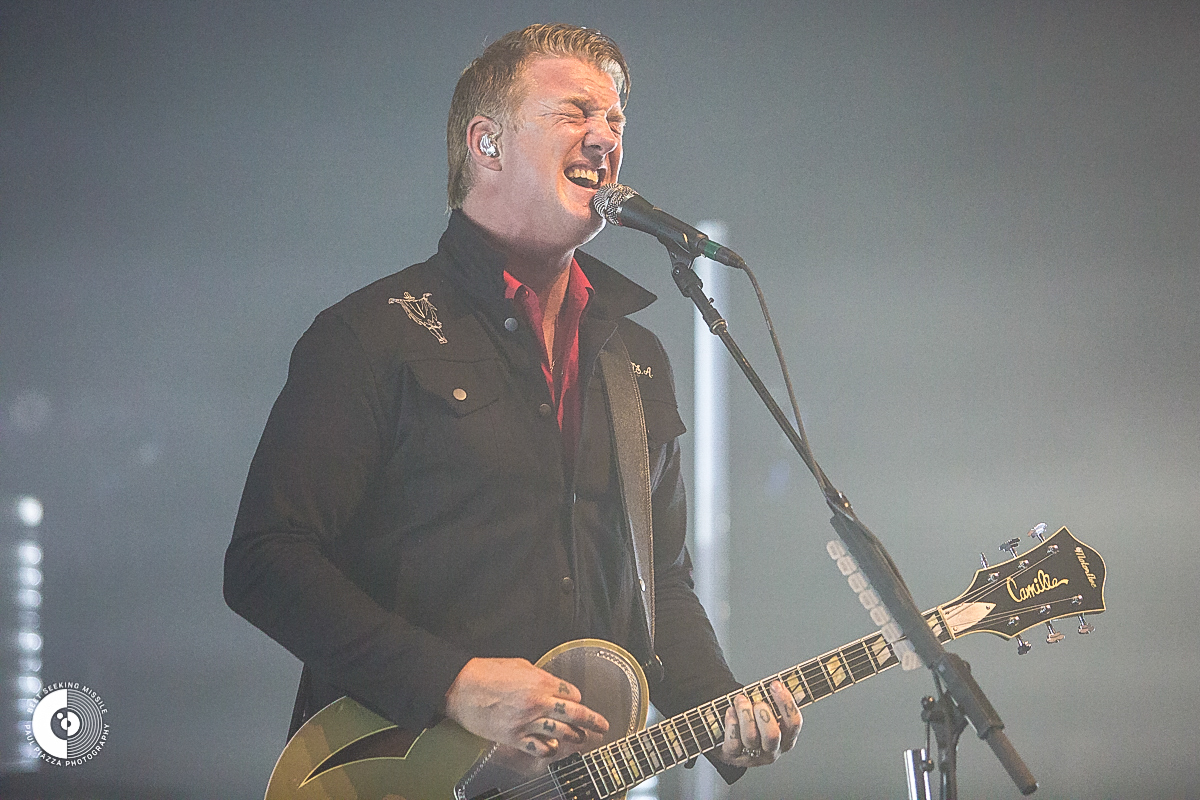 There was a peculiar vibe on the streets outside the Memorial Auditorium prior to the Queens of the Stone Age show.

First of all, it seemed curious that a sports bar near the venue had more screens showing the State of the Union speech than the Kings game. In fact, three screens had the speech on Fox News and none were showing the Kings game. Maybe it’s just a sign of the times, but it seemed strange. I had to pester the bartender at the establishment to put on the game for the final seconds of what turned out to be a rare victory for our beleaguered team. 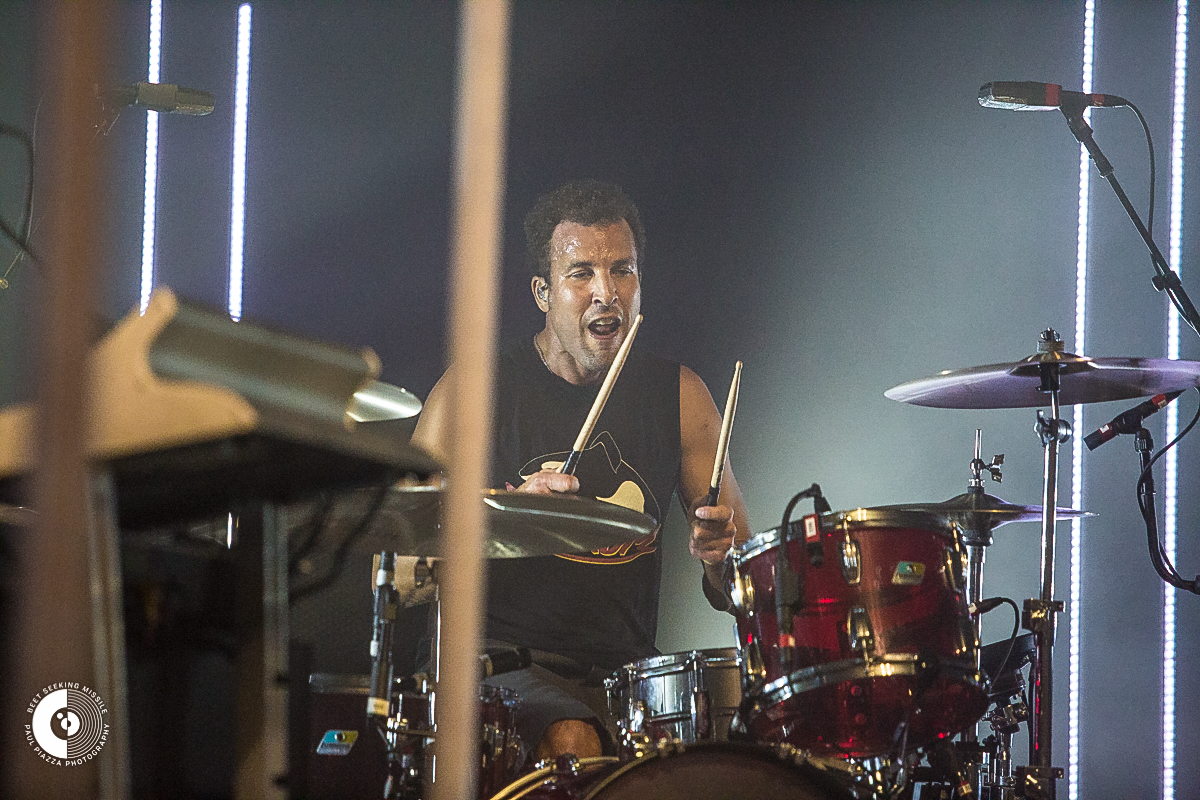 Jon Theodore of Queens of the Stone Age

Down the street, unlike the low expectations for the Kings (and the speech), the crowd heading into the Memorial were prepared see a win. Rather than a feeling of resignation, there was an air of confidence. No one seemed to be rushing. They knew what they were in for. There seemed to be an unspoken consensus that the Queens would show up and kick ass and take names. This is something the band have gained quite a reputation for over the years.

However, it’s important to mention that although this feeling resonated, there may have been some deep-down concern over a couple of recent episodes of erratic behavior by the group and band leader Josh Homme last year. 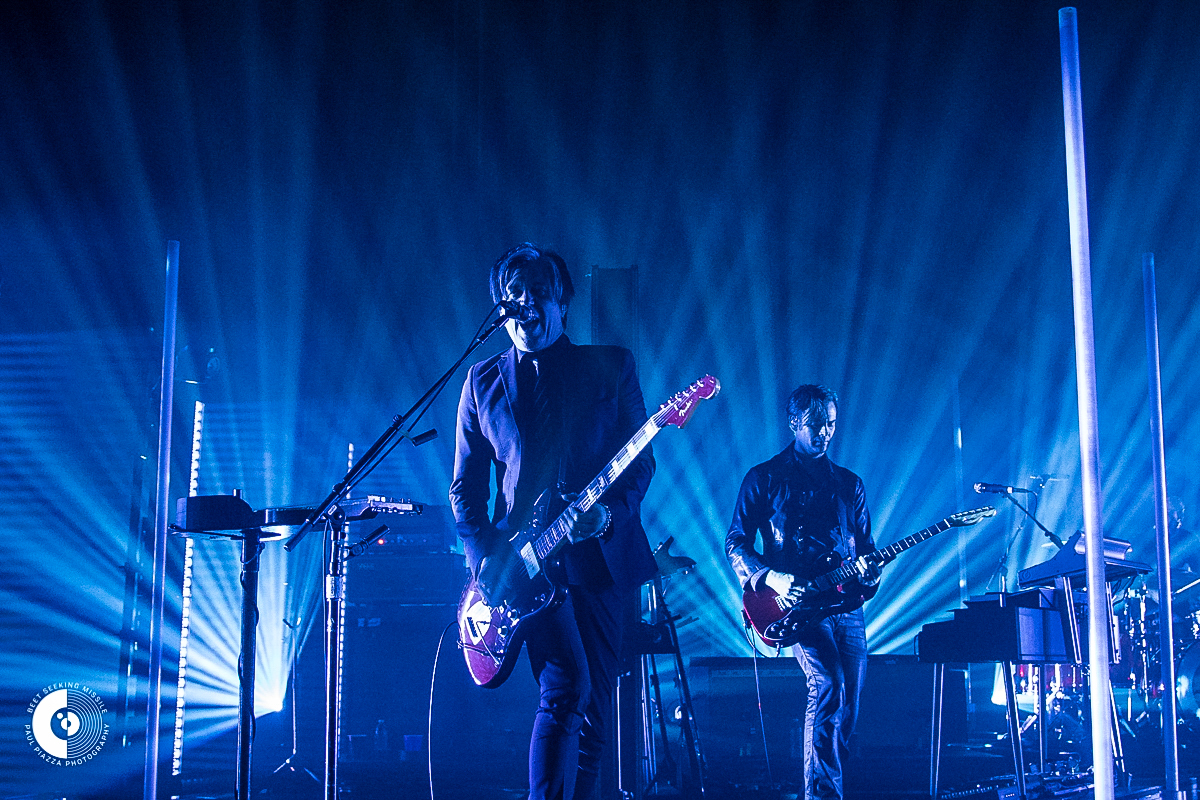 First, the band cancelled their prime time slot at Outside Lands due to an undisclosed “injury.” Then, during a holiday show, Homme received worldwide press when he kicked a photographer’s camera, and it struck her in the head during his band’s set. He later apologized via video and called himself a “total dick” for his actions. This was a little over a month ago.

These incidents may have given concern to many, but the band’s core fans didn’t seem too fazed.

Homme has long been a swaggering, anti-hero on the rock ‘n’ roll scene. Along with Dave Grohl, he’s been a driving force behind a movement to keep authentic rock ‘n’ roll expression alive. Together with Grohl and the former Led Zeppelin bassist John Paul Jones he formed the rock supergroup Them Crooked Vultures in 2009, which resulted in a Grammy-winning song for Best Hard Rock Performance. Last year, he collaborated with Iggy Pop on the album Post Pop Depression, and went on to do a tour with the legendary vocalist, which received critical acclaim. 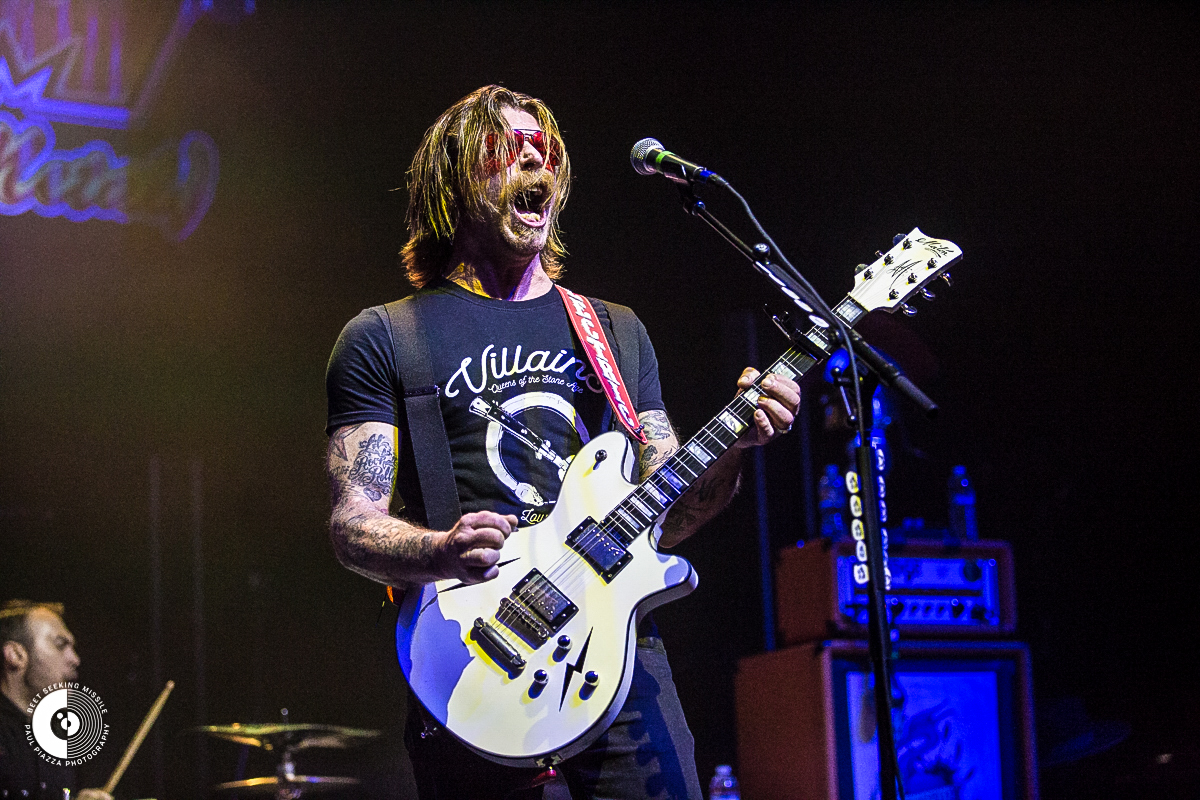 The openers on this night in Sacramento were Eagles of Death Metal, Homme’s collaboration with Jesse Hughes, an old high school friend. It was in 2015 that the group and their fans were attacked by terrorists at the Bataclan theater in Paris, where 90 people were killed and naturally, many, many others were scarred for life. Homme wasn’t there, but he was deeply affected by the tragedy.

Despite their name, Eagles of Death Metal are more of a boogie rock band with some rockabilly tendencies. Hughes came out with impressive energy, working the stage like a manic preacher and firing up the crowd by tossing them Dum Dums lollipops. The band rocked and by the time they were done, the crowd was ready to pounce.
Early in the Eagles set, Hughes pointed out that local native Colin Hanks was in the wings. Hanks directed an HBO documentary called Eagles of Death Metal: Nos Amis (Our friends) that documented the aftermath of the Paris attacks. Homme joined the group on drums for their final two songs and Hanks came out with the band at the end of their set to take a bow.

Queens of the Stone Age were touring in support of last year’s Villains album. The record was a departure for the band, who brought in producer Mark Ronson (Bruno Mars, Amy Winehouse). Ronson helped the group explore a sound that follows Homme’s intention to make a record that amplifies the limber grooves of QOTSA’s sinewy sound. This was highlighted in the live realm by the phenomenal drumming of Jon Theodore (The Mars Volta), who joined the band a few years ago. Another standout figure on stage was Troy Van Leeuwen (guitar, keyboards, vocals), who played with nimble ferocity throughout the set. 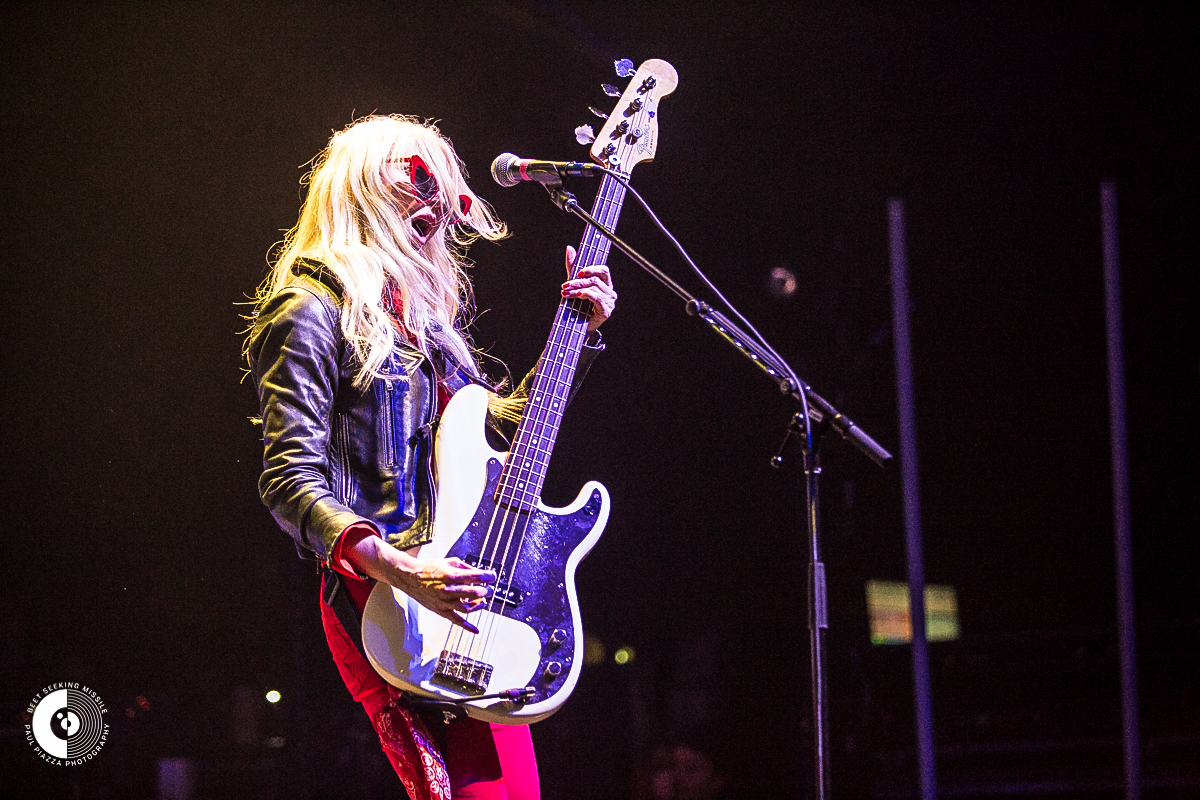 While the setlist was great, the sound in the Memorial Auditorium left quite a bit to be desired. The venue is known to be be aesthetically pleasing but acoustically lacking. On this night the Queens tried to compensate by just turning things way up, which buried a lot of the great musicianship onstage. Someone in their technical crew figured out a tweak prior to the last three songs and the sound improved dramatically. Too bad this didn’t happen earlier.

During all of this, at the center of it all was Homme, who started things off by muffing some lyrics near the end of the opener “Keep Your Eyes Peeled,” but seemed to find his stride by the fourth song, “No One Knows.” After that it was full steam ahead.

Homme bantered with the crowd, at one point promising a fan up front to add an unplanned “Mexicola” to the setlist as a birthday gift. They played it during the encore. He told a nice story about growing up with Hughes. He scolded a stage diver. He danced a little like Elvis, and at the end of it all he handed his vodka bottle over to the crowd.

All in all it was a solid, and often blaring night of rock ‘n’ roll that was a good reminder that Sacramento could really use a better sounding mid-size venue. In the meantime, the Memorial will close down at the end of March to begin a substantial renovation that promises improved acoustics. Here’s to hoping that becomes a reality. And fer godsakes, let’s also hope that the Kings can get some good draft picks. 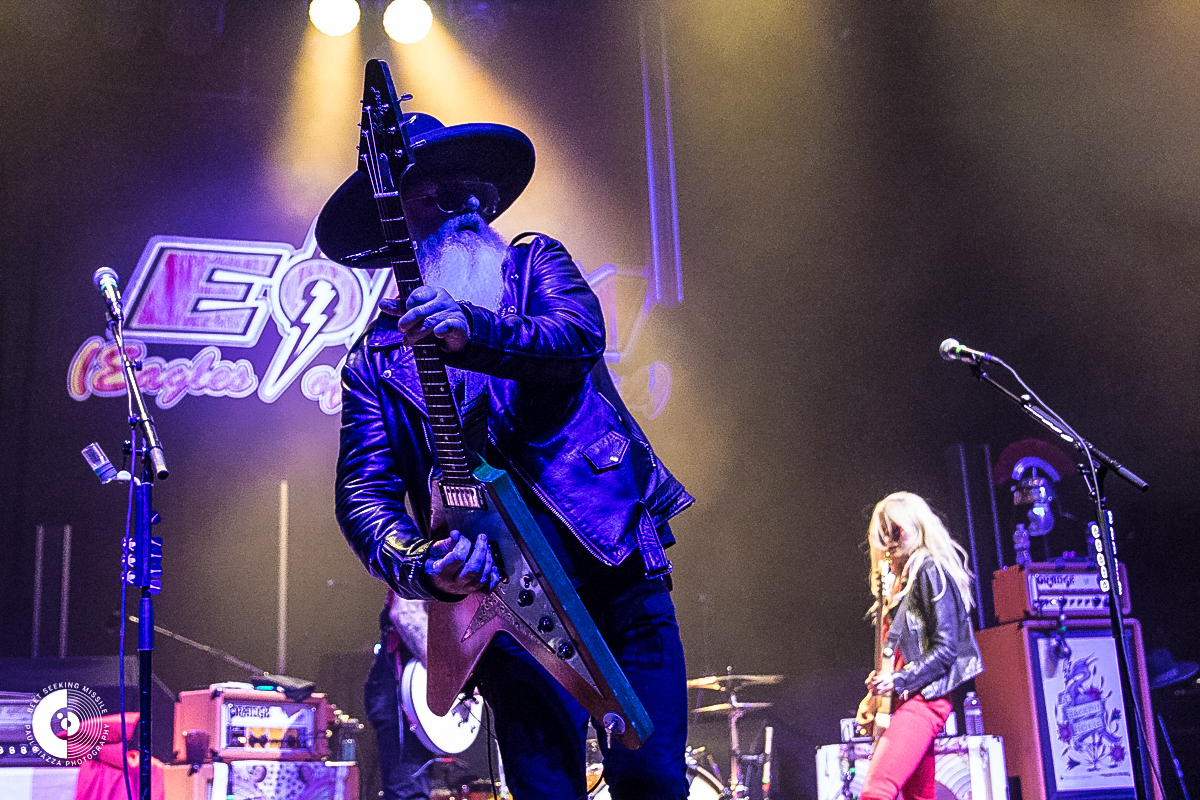