The adjective, in this case, does its job. As a genre, the word “folk” connotes something simple, straightforward and steeped in tradition. “Quirky” modifies that descriptor by sprinkling some uniqueness atop that tradition without bastardizing it in the process.

Shook Twins are, primarily, Katelyn and Laurie Shook, who were raised in a small town in Idaho, but packed up for Portland some years back to make a go as musicians. They’ve carved out a solid following in the years since.

Katelyn and Laurie, who are identical twins, carry the band’s sound with their harmonies and a mix of instruments—some traditional, some not so much. In recent years they’ve fleshed out the band’s sound and added members Kyle Volkman and Niko Daoussis.

They also picked up a large golden egg in the process.

That probably sounds like a random sentence that doesn’t fit in this story. But it does belong: that golden egg that has become a key part of the band’s identity.

In 2010, Laurie saw a man with a large golden egg outside a show in Seattle, so she asked the guy what the deal was. He told her a lady had given it to him and told him to sign it and pass it on.

“Pass it to me, then!” Laurie said. The man signed it and gave it to her, and she kept it in her home for a year before she suddenly had the glorious idea of turning it into a giant egg shaker. She poured popcorn kernels into the tiny hole at the top of the egg, transforming it into an instrument.

And then she stuck a sticky contact microphone on the egg and started hitting it like a drum. She was able to create kick drum sounds and snare drum rim shots. The giant golden egg immediately became a part of the Shook Twins story, so much so that there’s a whole section dedicated to it on their website, Shooktwins.com

You can check out the show in person at the American River Music Festival in Coloma on Saturday, Sep. 19, 2015.

We caught up with Katelyn Shook by phone as the band was driving west toward the Oregon coast to play a private wedding show. We talked about everything from their early influences and the band’s evolution to apocalyptic megathrust earthquakes and the best parts about playing festivals. 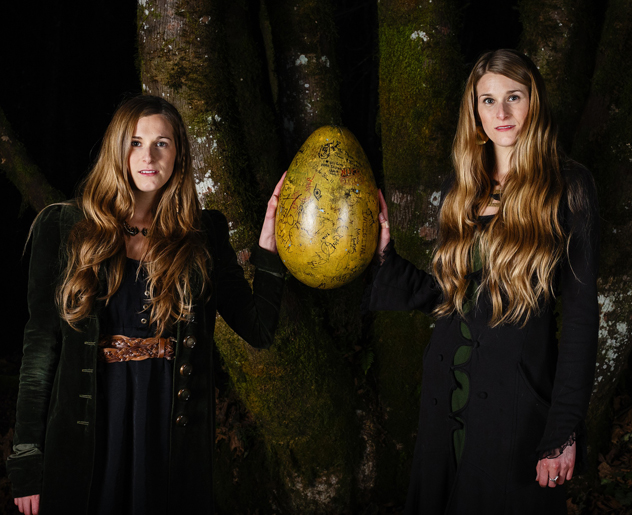 What did you grow up listening to as kids?
We were always really into music. We listened to all the popular stuff in the ‘90s, like Celine Dion. All the badass female singers inspired us. It was the first time I heard music that meant something to me, and I was old enough to really understand what it could do.

Have you played in the Sacramento area in the past?
No, I don’t think we have ever played in Sacramento.

How did you end up at the American River Festival?
We just get offers and some of the agents take them. We don’t really deal with that side of it at all. We get an offer presented to us, and we check it out and see if it’s something we want to do. That’s how it goes.

Lotus/Coloma is beautiful. I think you will like it.
Yeah, I’m excited.

In the song “Shake,” you’re sort of painting a picture of an earthquake destroying everything and the post-apocalyptic existence that follows. Is that song about the megathrust earthquake from that viral New Yorker article a couple of months ago?
[Note: If you don’t know what this is, Google “Megathrust earthquake Oregon” and prepare to be freaked out.]
Yes it totally is. We have been aware of it for a while now. Our bassist is really aware of it and has been telling us about it for years. Living in Portland, it’s the kind of thing we thought everyone should really know about, and I’m actually really thankful the news blew it up for a second. It’s a really freaky thing and it kind of infiltrated my mind. I was thinking about it a lot and what the aftermath would look like. The song just came out, and we decided to make it more of a story. We follow these two fictional couples and made it more about characters in an apocalyptic scenario.

It’s genuinely fascinating and frightening. Was it well known in the Pacific Northwest prior to the New Yorker story?
Some people over there are into geological stuff, but the average person didn’t know. We would talk about it at our shows a lot but we didn’t get any kind of response. We would say “Cascadia subduction zone earthquake,” and nobody really reacted. It’s crazy how many people are totally clueless. Scary.

As twins, do you co-write the songs, or does that process happen individually?
Each of us orchestrates some on our own, and we’ll also write together. It depends.

Do you think being twins gives you two a unique musical connection?
Yeah, because we kind of have the same exact vision as we write a song together. It comes out a lot easier when you have two minds going toward the same goal. We feel fortunate that we both agree on something and we can easily tell each other, “Nah, I don’t like that.” We just get straight to the point and get it done.

Shook Twins songs are loaded with harmonies. Did that come naturally, or was it learned?
We started out singing when we were really little. We would always sing in unison and then later we got into choir. We had an amazing choir teacher from middle school all the way through high school. Just being surrounded by different harmonies made understanding that concept super easy.

How much time do you spend on the road playing shows?
We average about half the year on the road. It seems like a lot. We play an average of 100 shows a year. We’re going to try to cut the tours down a little. It’s wearing on us all. It’s hard to be away from home that long.

After being home for a while, do you get the desire to get up and go again?
Yeah, totally. That’s how I know I still do enjoy it. We don’t have other jobs, so when we’re home it gets a little restless. There are not really things to fill your day up every day. When we’re on the road for so long, I can just chill for weeks. It’s so great.

Is “quirky folk” an established genre, or something you came up with?
It’s self-proclaimed. I don’t think I’ve heard any other band claim that. Nobody has responded to it really well. Our publicist and our management, too. It’s the word “quirky”—I guess people automatically think it has a negative connotation, but it totally fits the definition. It’s totally us. It describes us really well.

So are you sticking with it?
Now we go a little bit more mainstream, I guess; we just call ourselves progressive indie folk now. Not as cool.

Did you grow up listening to any folk music?
We discovered all of that later. After middle school I got into more of the folk scene. I started listening to The Beatles, Joni Mitchell, Bob Dylan and all the classics.

Do you think your non-folk background is what spikes your music with something unique and, ahem, quirky?
Yeah, when we first started writing songs, they were cheesy singer/songwriter-y and then it came into folk. We piddled around. Self-taught ourselves the instruments.

Your latest album, What We Do, is more fleshed out with electric instruments. How conscious was it to make a bigger sounding album?
This latest album is quite a bit different. It has a drum kit, electric guitar. It’s just a gradual evolution of our songwriting. We’re pretty slow at recording. It took three years between albums. It’s an evolutionary change in our style.

Is the egg just another instrument, or is it more of a band member at this point?
It’s kind of like our mascot.

How often do you play festivals?
We’re doing like 15 to 17 festivals this year.

How do you like them compared to a club show?
Festivals are great. For an up-and-coming band like us, it’s nice to not have the pressure of filling the club. You kind of get to borrow everybody else’s fans, especially if you’re on a festival with a whole bunch of bands you look up to. But club dates are great, too. I like being with the fans who are there for you. It’s a little more personal.

What’s next for Shook Twins?
We’re touring out until November, which is crazy. We’ve got lots of festivals still to come. We do tours and the festivals get tucked in. The festivals pay a lot more. They have a bigger budget, so we gear our tours around those.

The American River Music Festival lasts from Sept. 18 to 21, 2015, and costs $50 per day for adults and $15 per day for kids 8 to 17. Full weekend passes are $75 for adults and $20 for kids. Camping passes available on their website: Americanrivermusic.org.