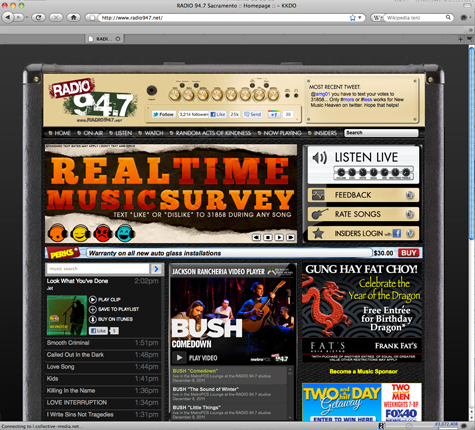 For those of you who have ever wanted to control what songs the radio station you’re listening to plays (who hasn’t?), you would be well advised to set your dial to 94.7 FM and and save the short code 31858 on your mobile phone. According to a press release from Radio 94.7 dated Feb. 9, 2012 the station is conducting a “live, real-time music survey that is putting listeners in control of what is played.” Listeners can use their phone to “like” or “dislike” every song played on the station by texting either word to 31858 while the song is playing. If you navigate to Facebook.com/radio947 or Radio947.net, you can see the activity of reactions. “The number of texts we get for each song varies,” Radio 94.7’s Jim Fox told Submerge. “Most get an overwhelming number of ‘likes.’ If, after a few plays, half are ‘dislike’ and half are ‘like,’ we’ll play that song less.” But what if two-thirds or more text in “dislike,” you ask? “The people have spoken, and we’ll stop playing that song,” says Fox. The station pointed out that so far songs from artists like The Black Keys (who play in Sacramento on May 5) and Florence + the Machine (also live in the area soon, on April 18 in Davis), as well as newer cuts from bands The Joy Formidable and Gotye are doing well. On the flip side, songs from artists like Blues Traveler, Beastie Boys, REM, Bob Marley and House of Pain are getting more dislikes. Apparently Radio 94.7 is the only station in the country, according to their press release, that is putting which songs it plays in the hands of the listeners in this way. Please, we beg of you, just don’t text and drive. Wait until a red light!