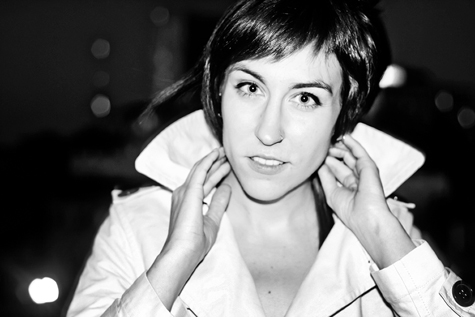 Back in high school, Reggie Ginn decided she wanted to learn how to play the piano. But unlike most students she tossed the Basics of Piano book behind her and ditched the formal instructor that would watch her every move. All she needed was a little help from Tori Amos.

“Since I knew her songs so well, I would just sit down and learn every note. It’s like she was my teacher. I learned from an actual artist,” Ginn said. “I already knew the songs and then [I would] make them my own way. I saw how I would position my hands. It just made sense.” Since she knew all of Amos’ songs by heart, learning the keys just came naturally to Ginn. After she became comfortable behind the piano, her next goal in high school was to complete her senior year project. She decided to put her skills to the test and organize a concert for her friends and family, where she sang her original songs in front of an audience for the first time. And she managed to put it together “pretty darn well.”

“My dad said, ‘When you told me you wanted to do that for your project, I honestly didn’t think you could do it. But you really surprised me,’” Ginn said with a smile. “So that’s when I knew, alright I think I should do this.”

Since then Ginn has claimed herself as an indie alternative rocker, released two albums, performed on Good Day Sacramento, won a Modesto Area Music Award for best unplugged artist, and was nominated for a 2011 Sammie award for best singer/songwriter. Now at the age of 27, she is ready to kick off her third album, Passion in Perspective, with powerful vocals, moving lyrics and soft piano keys. Unlike her first two albums, she will be rocking live with a full band including guitarist Brandon Dickinson, bassist Ian Maclachlan, drummer Mikey Koons and cellist Alison Sharkey.

“I’m excited for everyone to hear this. I hope people come out to the shows and get to see what my band can do. It’s going to be a beautiful thing,” Ginn said.

This solo, “do it yourself artist,” decided to start a campaign on Kickstarter, a website that funds creative projects through donations, to gain money for printing and studio costs for the new CD and succeeded in raising over $1,000. “I’m ever grateful that all these people are so generous enough to give anything. It’s really awesome,” she said.

When I caught up with the grateful musician on an early but sunny Saturday, her outgoing personality made it seem like we had already knew one another and were just catching up on each other’s lives. As we sat on a table outside of the Sacramento Comedy Spot, we chatted about her new music, learning piano and the importance of human connections.

What’s the title of your new album, Passion in Perspective, mean?
It’s one of those names that can be read in its own way. When I decided to call it that I asked different people, “What does that mean to you?” and a lot of people had different answers. I thought, that’s perfect because that’s exactly what I want to get out of this album, to get different responses and for people to take songs in different ways. When somebody listens to this album I want them to take themselves out of the shoes they are in and see the songs and the world in a different way, that’s the perspective point. For instance, one of the songs, called “Bathsheba,” is written from the point of view from King David. Two of the songs are written through animals’ eyes. So it’s just the art of having a song evolve either through the way you are listening to it, when you’re listening to it, or who you are. So I hope that everybody takes something different from each song.

On your website it says that you want the audience to “not feel alone” through your music. How do you try to do that?
My last album was Sing for the Voiceless, that’s what I like to say, because it’s kind of the vagueness of the song and how everyone can relate to it in their own way. Even though I wrote it from my own point of view and own experience. When you relate with anyone it causes some comfort because you know you are not alone in whatever you are going through. Multiple times I have had people come up to me and say, “Your music means so much to me. That’s exactly what I’ve been trying to say but have never been able to say it before.” I find it a very big gift to be able to put into words what other people are feeling and it helps them release.

Was it difficult not to have a formal teacher when you were learning piano?
No, it was easier, I think. I tried several times with several different teachers when I was younger. I just didn’t have the attention span. It’s something your parents say, “Oh, go do this.” You don’t really want to, so I didn’t. When I was a junior in high school, I knew I wanted to be a singer. I was writing poetry, and I wanted to express myself in some way. I couldn’t depend on someone playing guitar or accompanying me. So I said, “I’ve got to do this by myself.” Piano just really spoke to me, and like the title of the CD, it was the “passion” that drove it. That’s why I got it. It really just came to me naturally. It’s really amazing because I know a lot of people struggle [to learn piano]. It’s not an easy instrument. But for some reason I think it comes naturally to me.

Who are your musical inspirations?
Tori Amos is really one of the artists that spoke to me most… She really taught me how to express my feelings and how to learn play. I love [an] artist that can be different in a way that’s raw. For instance, PJ Harvey is one of my favorites, because she doesn’t censor herself or worry about how she’s sounding. She doesn’t have to be perfectly on key or just beautiful all the time. She just wants it to be raw, empowering and in your face.

What do you think of the Sacramento music scene?
I really love it here, actually. I went to Los Angeles for a year, to try out things. I wasn’t ready for it, but I did it anyway. It was so cutthroat. I came running back to Sacramento and realized I really needed to establish myself and needed my own town first before going off to somewhere big. Everybody is just so tight-knit here. Once you are in, you’re in. It’s great and there are some super talented musicians that I’m honored to be in the same town as.

What do you do before a show to get yourself pumped?
What I usually do is I talk to the people. I like for people to feel comfortable when they are going to see me perform. People who don’t even necessarily know who I am or they’re there for someone else, I like to bring them in, so they have a reason to stay. Like, “Oh, this girl was nice to me, she’s also a performer? Alright I’ll stay for her set, even though I was going to leave.” Because it’s really important to draw in your audience, whether it’s when you’re on stage or off stage. It’s important to have a connection and let them know they are appreciated because that’s why I’m doing my music, is to have people hear it. 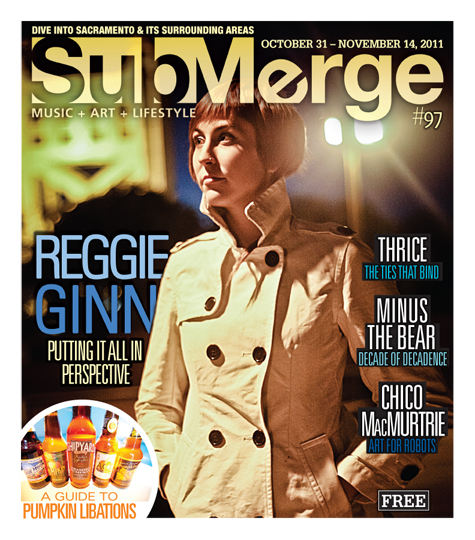 The release of Passion in Perspective will be celebrated at Luigi’s Fungarden in Sacramento on Nov. 12, 2011. The show will start at 8 p.m. and will also feature The Kelps and Fierce Creatures in support. The all-ages show will cost just $5 to attend. For more info to Reggieginn.com.