The Chameleon and the Kaleidoscope

When you see or hear Riff Raff, you won’t forget him. Nothing about him is ordinary, and it’s not an act. From the neon clothes and flashy jewelry, to his off-kilter flow and bizarrely genius wordplay, he is the definition of unique. While he cashes checks from rapping, he doesn’t feel comfortable confined to the role. This is the music business, and even bigger, the entertainment business. And Riff Raff is a damn good entertainer.

Born in Houston (perhaps the one clear influence on his sound), much of his back story is intentionally shrouded in mystique. Where the line between man and the character we know as Riff Raff crossed is unclear, and whether there is even a difference at this point seems unlikely. For journalistic purposes this can be frustrating, but as a listener, it enhances the enjoyment by upping the bizarre. Whatever it is, his unconventional approach has been a recipe for success. Everything about his campaign is loaded with viral fodder, from a YouTube channel boasting more than 120 awe-inspiring videos (mostly music and some skits) to his debut album Neon iCon, set to drop on Diplo’s Mad Decent label this year. What is next, no one knows, but it’s playing out in a way that is hard to stop watching and listening.

It may make a person cringe, but there is something genuinely enjoyable about his quest to be the greatest entertainer—not rapper—in music. The air of not caring is obvious, and not only does it look fun, it’s enjoyable to witness. To be honest, words don’t do the man justice. Riff Raff needs to be experienced. Sacramento will have its chance as the man will be gracing the Ace of Spades stage on May 12. 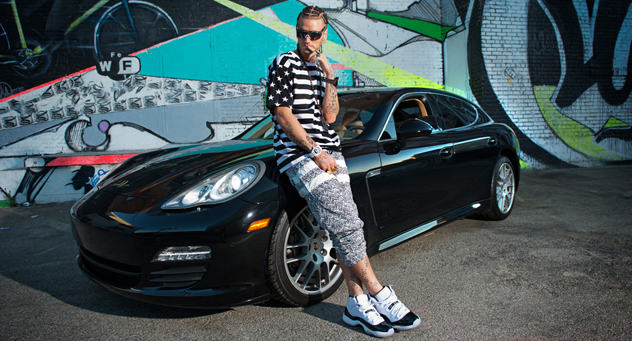 How much of what you’ve accomplished, and where you’re at today, was planned?
Day by day my choices change. You may have some feelings one day like you want to do something, and the next day you might have a whole different outlook. I just try to make progress with what I’m comfortable with. When it started to be more about music, that’s when I started to really try and make better songs. Is music all I want to do? No. At different stages I want to do different things, but right now it’s about this Neon iCon album.

Do you see yourself always doing music?
I don’t know what I want to do next, I just take it day by day more or less.

Are you in complete control of how everything is presented, from the music to the image and all that?
I don’t have someone who dresses me or anything, unless I’m doing a big magazine shoot or something. I wear what I want. I’ve always been a fan of jewelry. I get different vibes from different things, so if I feel a certain way one day I’ll wear this, and the next day I might wear something totally different. The same way a chameleon changes the color of their skin based on their environment, or their mood. Clothes are just a way to express how you feel. Yeah, I could be a stylist for people.

It seems like all the neon colors are becoming pretty popular, would you see that and then change it up as a response?
No, people can go look at my pictures from 10 years ago and see I’ve been rocking this. I don’t dress the same every day, but I’ve always loved neon colors. It’s amazing…OH SHIT, I think the tour bus just hit something… Anyway, it’s amazing how people will say they don’t like something I do, and then something will happen, and then everyone is doing what I was already doing. I don’t like being like that, but whoa, man, I have a lot of people who use my style. They would never admit it. They couldn’t admit it because they don’t want to do that.

Are you a believer that imitation is the best form of flattery?
No, no no no. People can try and say that, but no. It’s competition. It’s not admiration; they’re trying to be you. There are two different kinds: where people are looking up to you and might get some braids and wear neon because they like Riff Raff. But then you have someone like, “Fuck Riff Raff, I’m the one who started with the braids and neon clothes,” then it becomes somebody being salty. It’s all fun or whatever. There are probably a million people who were Riff Raff for Halloween.

Can you laugh at it at least, looking at it from both sides, and know you affected people one way or the other?
Yeah, man I just got a crazy style that’s hard to copy. James Franco couldn’t do it, so what makes any random person think they can?

But they can’t match it up with the aqua berry bracelet and aqua berry grill though…
Yeah, exactly and don’t forget it.

Are you constantly writing stuff down or taking notes, or do you just sit down and write a song on the spot?
Randomly, I’ll do that, but usually I just like to hear the beat and write to that.

What kind of rapper would you say are?
I’d say… I’m like a Versace Kaleidoscope rapper. If you look into a kaleidoscope, it’s always changing, and you see all these colors blending together. The lights and colors, you can’t really explain it, you just gotta see it to believe it. I envision stuff while I write. When I say it, if just half the people who listen can envision the same thing, then we connect right there. Some people rap to explain themselves and paint that picture. I’m not trying to paint a picture so that people understand who I am. I don’t do that. When I do my songs, I say what I see on the beat. It’s like an audio movie. When I wake up in the morning, I don’t watch the news, I watch cartoons. The news makes me feel bad, but cartoons are funny. When I write, I have the same mentality. I want to write shit that when I read it, it feels good. Nobody wants to hear about problems. I want to hear about something out of this world, something bigger and better than what’s going on. I want to hear about aliens, and haunted houses, stuff like that.

Since there is nobody in your lane, do you feel like you are your own competition to dig deeper and visualize something crazier and crazier each time?
Umm, shiiit. Yeah, I just gotta come up with crazier and crazier shit, ya know what I mean? I am in my own lane for sure.

Do you ever shock yourself with the stuff you say?
Of course.

Is it entertainment for you?
Yeah, if it wasn’t my life wouldn’t be fun and I wouldn’t be happy. If you’re not happy, that sucks.

Do you separate from Riff Raff the persona, or is it all in the same now?
I do whatever I want, when I want. It’s always me. I don’t have a wife or kids, or have this hidden life. Everything you see is just how I do shit. It’s controlled; I did this on purpose. I don’t have a wife and kids, or people telling me what to do for a reason. I always had a dream of making a lot of money, buying the best jewelry and having the prettiest girlfriend. That’s just how it is, because that’s what I want. Every day my outlook changes, but it’s hard to be anything but me.

That’s that rap life for real.
I don’t call myself a rapper, that’s real stereotypical. I don’t think people can judge me until they hear my first album, Neon iCon.

So what’s a better title?
An artist.

The Neon iCon himself, Riff Raff, will perform at Ace of Spades in Sacramento May 12, 2014 with Grandtheft, Diamond Dez and JG. Doors open at 6:30 p.m. Tickets are $23 and can be purchased through Aceofspadessac.com, Entlegends.com or at Getta Clue, Dimple Records or Armadillo in Davis. Dress to impress!