FAREWELL TO THE LOUNGES: TWO LOCAL VENUES FOLD IN A WEEK 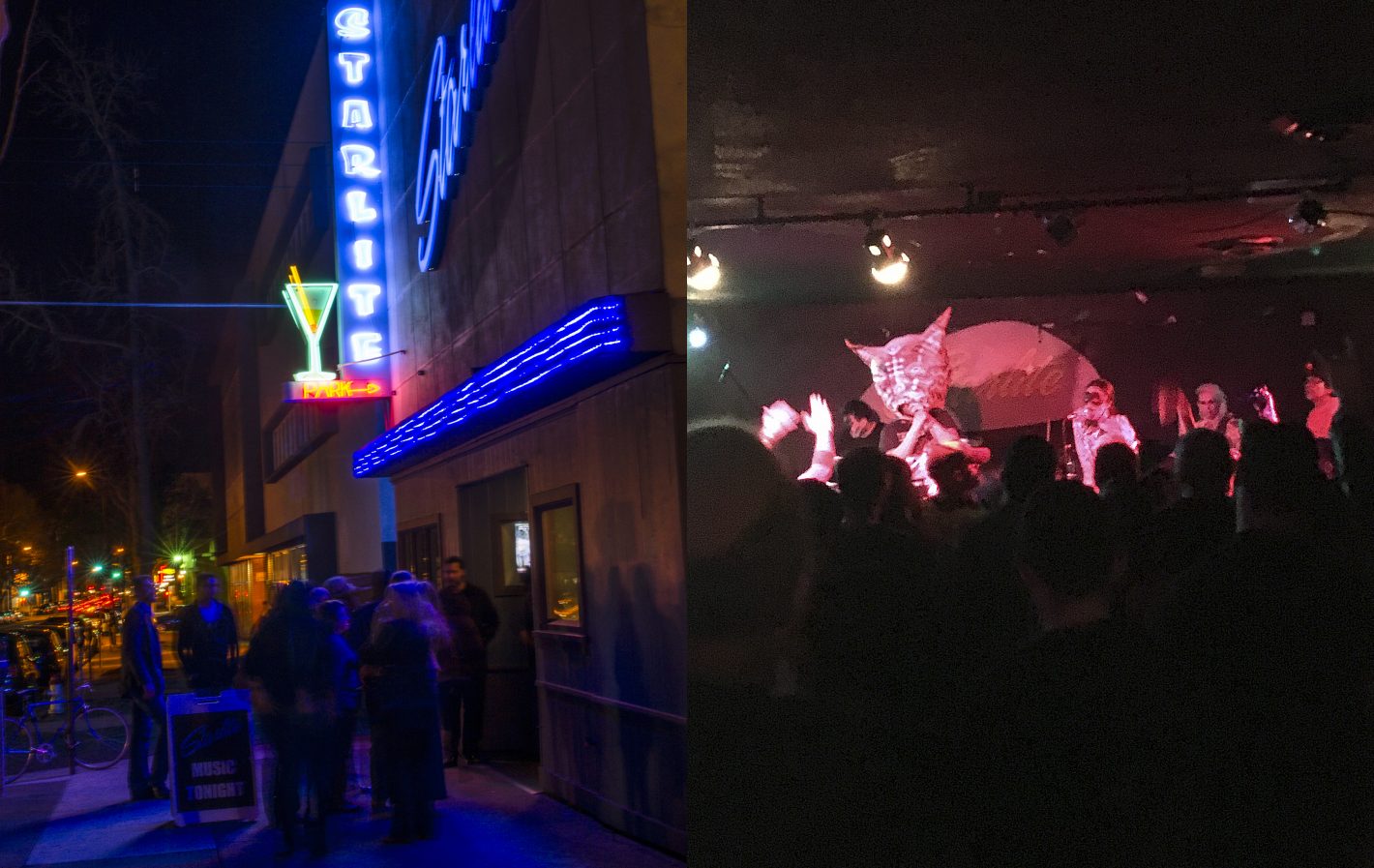 Two of Sacramento’s most prolific live music venues dropped off the scene in the span of just a couple of days last month, fanning the flames on the unending conversation surrounding the health of the city’s live music scene.

This time it was the Lounges: Naked Lounge announced that they would no longer feature live music and Starlite Lounge announced that they would shut down entirely. A similar blow hit Sacramento about three years ago, when Luigi’s Fun Garden, Assembly Music Hall, Marilyn’s on K and Witch Room all shut down within a year of each other. Predictably, a wave of concern, tempered by a healthy dose of optimism, rippled across the various scenes, just as it did after the latest venue closures.

“It pains us to close the doors on what we all feel is such an important aspect of the community and the local scene, but when push comes to shove, we are out of options,” said Starlite Lounge via Facebook on the evening of June 20. “Sacramento is a tough market, and it’s a constant uphill battle to run a venue of our size that focuses almost exclusively on live music and touring bands. We truly appreciate your loyalty throughout these years as patrons, music fans, friends and family.”

In the years after The Townhouse changed ownership and became Starlite Lounge, the space became a haven for Sacramento’s heaviest music, largely on the back of Chris Lemos, who booked shows and ran sound in addition to playing in local doom/psych rock band, CHRCH. His name can be found littered across the Facebook eulogies for Starlite after the closure was announced.

But as much as Starlite became a hub for the metal scene, their offerings wandered far beyond the subgenres of that niche. While their closing night appropriately featured a metal show, the two events prior to that featured a band who performed at Woodstock and the Second Annual Booty Worship, which hosted burlesque and pole performances as well as spoken word and live music.

Naked Lounge offered something different, but equally important to a city’s live-music DNA: you could book a show there with unparalleled ease. The venue featured all-ages live music four nights a week in perpetuity. Musicians had to bring their own crowd (even more so than other local venues), but it didn’t take many people to make that room come alive.

As social feeds lit up with responses to the venue closures, we reached out to some local musicians for their take on the situation. Sprinkled between those responses are excerpts from other locals on social media.

April Walker (SpaceWalker): “I was honored to have been on [one of the last shows] at Starlite and the last show at Naked Lounge on June 30. This is a wakeup call for all components of our scene and a call to action for the venues, promoters and artists to find other ways to get people in the building besides relying solely on the performers, who already have a responsibility to keep people in the building with their art. An easy way to kill the scene is to take it for granted. Ever since I’ve moved here from a small town, I’ve been excited about all of the art and music that surrounds us, but for the same amount of time have heard Sac natives complain there’s ‘nothing to do.’ If we don’t seek it out and support the events going on, that will eventually be true.”

Danny Secretion (The Moans): “I don’t feel it says something about our local music community as much as is it does the changing economic landscape of Downtown and Midtown Sacramento. The music scene will continue to thrive, whether it’s in Downtown and Midtown or in Oak Park, West Sac or the suburbs. The musicians and music fans in this city are much too resilient to pack it up. Both [venues] served very important facets of our local music scene. Starlite was a home to many of the heavier acts in town. Naked Lounge was a home to many of the singer-songwriter types. As much as it hurt those facets with the closing of these venues, it points to how vital it is that the harder acts continue to support places like On the Y and the singer-songwriters continue to support places like Luna’s.”

Autumn Sky Hall (Write or Die): “We have emotional bonds to these places, like old friends. Naked Lounge was an amazing platform for musicians just beginning to play in the area. Venues have been coming and going since people began to play music in Sacramento and they certainly won’t fizzle out just because something dear to them was lost. We’re all far too stubborn. Every few years or so it feels like the scene has to more or less reinvent their wheel, but I think that’s good. It forces us to think of the future from fresh perspectives. I’m eager to see what the next chapter will be, and ready to work alongside the community to get there.”

Chris Lemos [via Facebook]: “I’m not going anywhere but GOD DAMMIT Starlite was home. Literally. I spent more time there than I did actually at home most of the time. There are wheels in motion and I can only hope that what the future holds feels as good and does as much as that room did for me and the staff, and so many others. Together we mourn, but together we can also make it out of the wreckage. RIP Starlite.”

Vinnie Guidera [via Facebook]: “I’ve played at Naked Lounge 27 times. They trusted me when I had weird ideas that were too big for a coffee shop and helped me make it work. They reached out and booked me when I had no drive and had all but given up on playing music. That stage was home base for a lot of years, and I’ll always appreciate the comfort that I felt there. Starlite was THE place to play loud and hard. Chris Lemos filled a huge gap in the artistic mosaic of this town by giving heavy music a home. Not only could you find some insane acts from across the world playing there, but you’d usually find locals on the same bill. We may have only played there three or four times, but those were three or four of my favorite shows. Go out to stuff. Support local art. ACTIVELY ENGAGE with your creative community. Take a chance and spend $5 to see a band you’ve never heard. Spotify doesn’t feed artists or keep venues open. PS: If you are an artist and you don’t go to shows other than your own, you aren’t pulling your weight.”

Chrome Ghost [via Facebook]: “We all loved the Starlite Lounge, and will miss it dearly. Chris Lemos was always a major supporter of this band, and we look forward to working with him for the rest of time. We played one of our most unique shows at the Naked Lounge, alongside our idols Odamé Sucks. Both of these venues offered something important to the community, and will be missed.”

Kenny Beasley [via Facebook]: “The Sacto scene is more vibrant now than ever. Trust me, I don’t think there’s been a six month stretch that I haven’t played a show in Sactown since 1987 or longer. And I can tell you that there are more cool spots to rock than ever. We got the Above and Underground crackin’ these days. How many rad spots have come and gone? It’s just a part of it. You got this kids!!!”

Brendan Stone [via Facebook]: “I can’t stress enough how important it is that we not only verbally support the businesses we appreciate and want to stick around, but actually come out to their events and promote them vocally with others.”

Ean Clevenger [via Facebook]: “Today we are feeling a huge blow to the scene … I hope the city rallies and really comes up to support the underground shows. This business is fragile, especially for people supporting real bands and artists. It’s no joke, it takes a village.”

Evan Thompson [via Facebook]: “This one really hurts. Every show I had the privilege of playing at Starlite, regardless of turnout, was an absolute blast. So many heavy hitters have played that stage thanks to the hard work and dedication of Chris Lemos and the rest of staff.”

Susan Rose [via Facebook]: “Well, fuck. Starlite Lounge and Chris Lemos pretty much brought the heavy music scene to life in Sacramento over the last few years. I’ve been honored to play so many shows with fucking amazing bands that, frankly, we wouldn’t have had the chance to open for otherwise. Thank you for staying around as long as you have, and I hope everyone working there lands on their feet. What a bummer.”