A Name to Remember 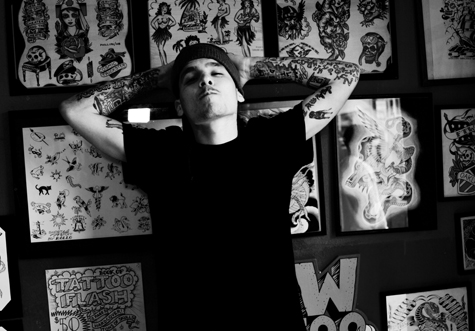 Roach Gigz makes you press rewind. He says stuff so ill and out there like, “So I was picking the vegetables out of my Cup O Noodles/Feeling like a pit you fucking poodle,” on a regular basis; you hear something new with each listen. Rhymes aside, he knows how to write catchy songs and construct them properly. He’s got all the tools and the formula for success in his possession; it’s just a matter of time before it comes together. The crazy part is, he’s 21. Needless to say, the future is bright for the San Francisco rhymer.

While there have a been a handful of releases over the past couple of years, the most notable are his two-part Roachy Balboa mixtape series, both released within the last year. Off the two projects, he has gone from being a local talent to generating a national buzz, with outlets like MTV taking heed of his skills. For fans of Bay Area rap this may sound like a familiar story: infinite potential and promise, being dubbed the one who’s going to make it, ending in eventual obscurity when the stage gets bigger. No promises can be made, but damn, it feels different when talking about Roach Gigz. His strengths are rooted in his individuality, but on the flip, it’s not what he relies upon. It’s his versatility and adaptability that will take him to the next level.

His ultimate fate awaits, but in the meantime he will be making a stop at the Colonial Theater on April 22 alongside J Stalin. The same energy you hear on record is only multiplied live, and that is a guarantee.

What’s happening man? How you doing?
I’m chillin’, just listening to some beats trying to figure out what I’m going to do. I’m working on finishing up this EP, and just recording a couple more songs for it.

How’s it shaping up right now?
It’s good. I hella like it. I don’t want to put out any average shit, it’s all got to be the stuff I like the best. I never know what anyone else is going to like. It’s funny because they like the ones you don’t really like that much, and that’s when it gets complicated.

On that note, my favorite song is “Pop Off.” Where does that one stand with you?
“Pop Off” is one of my favorite songs that I ever made. I love that song. I put that beat on and was like, ‘Whoa, this shit is crazy!’” I remember just listening to it over and over. And see, the video came later. The song wasn’t about Oscar Grant [an unarmed civilian shot dead by a BART officer in Oakland] when I laid the song. I don’t think I wrote that one down actually, it just flowed right.

Are you more of a writer or do a lot of your songs come from freestyles?
I do both. Really it just depends on the situation. I do write, but when I’m recording by myself I usually just think out a part and memorize it, and then put it down. Then think about the next part, put it down and piece it together like that.

Do you find yourself getting looser when you record by yourself?
I can get loose anywhere, but it is more of a freedom to take your time. You don’t have to worry about other people’s schedules, or who’s coming into the studio next. I do like to record by myself a lot, though. It’s cheaper, and it’s on my own time.

Things are picking up for you, and it feels like you’re on the brink of something bigger. How are you personally and artistically dealing with that and the changes it’s bringing?
It’s crazy because it’s what I’ve worked so hard for. To start to get there is like, ‘Awwww shit.’ But I mean, as far the music, I’m just pushing on, making more music and not slowing down. Personally, I don’t know, not much has changed. I mean, I know the deal. I have to deal with the stuff of having my own family, and also living this life and things come up. And you know, that is hard. It doesn’t feel like it came out of the blue though. I’ve been working hard for this. I’ve been prepared for what’s coming my way. I’m just working hard and am happy and humbled that things have gotten this far, and I just hope that they keep going.

Have you been getting label interest and going to meetings?
I don’t know if I’m supposed to talk about it, but they know who I am.

Without saying names, what have the meetings been like? Any funny label stuff?
It’s been pretty relaxed, and all I’ve heard are positive things. But I’m not even thinking about that at this point. I feel like I could make things much bigger down the road just doing what I’m doing now before I make that next big step.

Do you feel being a Bay Area dude, just being laced with that independent mindset, that it prepares you better for those situations?
I always say it’s inbred in Bay Area music, we don’t need anyone else to make it work, but at the same time that can slow us up. People get stuck just trying to do things by themselves, and not take that next step. I’m trying to do that. The Bay Area scene has made me be able to do what I’m doing now. You see how the ones before you did it. I’m just going a new route, as far as Internet and all that, instead of selling it out the trunk.

You embody the Bay Area sound and energy, but it’s also not confined to that. It’s like your content is broad but you spit it like a Bay cat. Is that a conscious move?
It’s not really conscious. The delivery, I don’t have much control over that. It just comes out of me like that. I don’t think, “OK, I’m going to make a song for the ladies so I got to change my voice or rap like this.” Content-wise, I want to reach as many as possible, but I’m not thinking that way. It’s just whatever shit is on my mind. That’s why it’s random at times–that was just where my mind was going at the time.

You’re not a political rapper, but you do definitely sprinkle some things in. Do you see yourself delving into that a little more?
Political things come up when I feel personally pressured into something. It’s more important than anything else I’m talking about, but at the same time I’m not a political rapper, or trying to be one. I’m not going to give you a history lesson, but yeah, I want to speak my opinion and let you know how I feel about something. So yeah, I’m not going to be Talib Kweli, but I won’t ever stop saying how I feel.