When Robin Bacior made the decision to move from New York to Portland, she considered leaving her life as a musician in the rearview mirror when she left.

The now-28-year-old singer-songwriter had spent the previous four years living in Brooklyn and building a musical following in the city, but after an illness forced her off a tour and into the silence of her apartment, she came to the bedridden realization that she was unhappy and needed to make some changes.

Around the time she swapped New York for Portland, she started having some intense dreams about bodies of water.

“I was having them almost every night,” she said. “Depending on the way the water moves, it’s supposed to reflect emotional changes.”

As those dreams sloshed across her mind from night to night, she pooled them up by day, deliberately assembling what would become her latest album, Water Dreams, which she will release on Jan. 13, 2015.

I spoke to Robin by phone while she was packing for a trip back to Chico (her hometown) for the holidays. Our conversation focused on her migration from Chico to New York to Portland, and the musical evolution that paralleled those moves.

Bacior grew up in a musical family, but she considered herself a largely passive participant as a kid and in college. Both of her parents play music, and their house would be filled with fellow musicians throughout her childhood. Meanwhile, she took lessons and learned to play piano, flute, saxophone and more.

When she graduated high school she stayed local, enrolling at Chico State, where she studied journalism. She attended tons of concerts and focused heavily on music writing, and was also a DJ for the campus radio station.

Music was a massive part of her life, but she was mostly looking in from the sidelines. She had been writing her own songs for a while, but she was looking at her music without much purpose.

She played a few shows, but performing was a struggle. Her eyes would blur, her forehead would dip toward the microphone, her guitar would slip out of tune without her noticing. She was uncomfortable, in part because performing was still new to her, but also because she was playing to a small-town audience with whom she had grown up.

It wasn’t until she stepped into foreign territory that she made music a priority and came into her own.

Around the time Bacior uprooted to Brooklyn, she was invited to sing on the record of a Chico band called Surrogate. The lead singer, Chris Keene, had extended her the offer.

“I had never really done that before,” she said. “But I went in and sang and had a really nice experience with him. He said, ‘Hey, I owe you one.’”

So she flew back to Chico in 2010 and recorded her first batch of songs in his studio space. That would become the Aimed for Night EP, which she used as a foundation for booking shows as she got her legs in New York.

She was still shy at the microphone, but she channeled her energy into getting over that hurdle. Living in a new space with no real ties to her life up to that point offered some freedom in that development, kind of like the clean slate offered to a graduated high school student upon arriving at college.

And then she met Dan Bindschedler, a New York cellist whose influence would be felt all over Bacior’s next few releases, and especially so on Water Dreams. The two formed a tight musical bond that would even survive Bacior’s westward migration years later.

When the two began collaborating, Bacior had already written many of the songs for her first full-length album, Rest Our Wings. Bindschedler’s cello was laced into the seams of the songs, most of which had already been fully written.

By this time, Bacior had spent a few years making herself a part of the New York music scene, regularly playing shows, booking tours and releasing a couple of 7-inches and EPs in addition to Rest Our Wings.

But then she hit a rut.

She had organized a tour, and on the first day out, she got sick. She tried to grind it out, but five days later she had lost her voice and was knocked out by her illness entirely. She had to go home.

“I was sick as a dog, laying in bed,” she said. “I had nothing to do. I realized I was unhappy. I decided to leave New York, and I wasn’t even sure if I was going to play music anymore. I just needed a personal change.”

She decided Portland would become her new home, but before making the move she traveled with her band to an East Coast beach house to record five new songs in live takes. That punctuated her musical stint in New York. 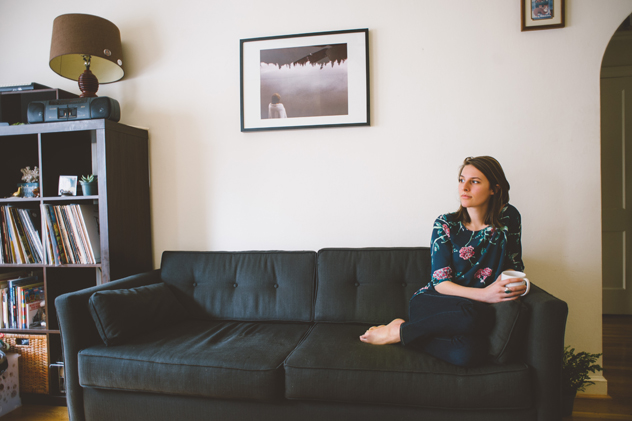 Of course, it did not end up punctuating the entirety of her musical career. Instead, she released those beach house recordings in the form of the I Left You, Still in Love EP, after settling into Portland.

After that, the next set of songs began flowing, quite literally.

Bacior’s water dreams came on the heels of her huge life transition. Paths that previously felt certain had collapsed and she was once again in a new place. One by one, she bottled up her dreams in song, until the album was complete.

“With this one, the songs were all written to move into one another,” she said.

“Everything was written one after another.”

Her previous releases consisted of individually written songs bundled up and packaged. The songs on Water Dreams, conversely, were written specifically for Water Dreams. Even the track listing came together song by song, until the 10 tracks were stacked atop one another.

The water theme can be felt throughout the whole album, whether it’s flowing in long cello drawls or pattering in sharp staccato droplets. You can also hear it in the words, sometimes in the form of literal references to pools and oceans; other times more abstractly.

Similarly, this was the first time Bacior wrote all of the songs with Bindschedler’s cello at the forefront of her mind.

“We spent one year as a kind of bi-coastal duo,” she said. “I would email him rough drafts of songs and when we got together, we would work out ideas.”

Bacior left a lot of space in these songs for Bindschedler to do his thing. She wanted him to “be a true voice” on the album. Once they finished writing the songs, they ironed them out on a West Coast tour and then recorded them in Portland.

After Water Dreams is released in January, Bacior will head out on the road, passing through Sacramento for a show at Naked Lounge 10 days later on Jan. 23, 2015. The tour will take her through the Pacific Northwest down to Southern California and to Arizona. Bacior says she loves the moment that comes with touring, but that she’s a homebody at heart.

“I can spend days by myself, but it’s good for me to balance that with the polar opposite experience,” she said. “It shakes my brain.”

But her creativity comes when she’s settled in her own space, and she’s happy to call Portland her home. And Bindschedler has since migrated to Portland as well, so the duo is once again sharing territory.

“I really enjoy it here,” she said. “I miss New York because it’s wonderful, but Portland is one of the most healing places to live. I feel like I can play music and work all day and the second I want to be done, the energy allows you to calm down.”