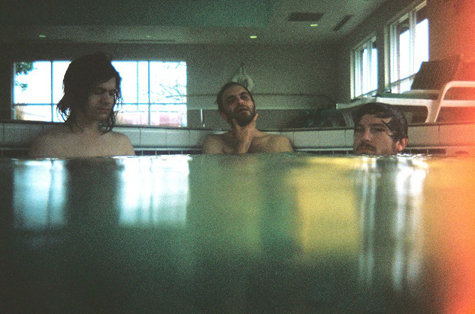 One of our favorite Sacramento-area bands Tera Melos recently had its new single “Tropic Lame” premiered online by none other than Rolling Stone. Rolling-fucking-Stone, people! The song has a really cool surf-punk-meets-psych-pop vibe to it and will appear their upcoming album X’ed Out, to be released April 16 on Sargent House. The band’s guitarist/vocalist/multi-instrumentalist Nick Reinhart told Rolling Stone, “Previously, we really didn’t know how to write a song like ‘Tropic Lame,’ or even make a record like X’ed Out. We had to approach writing music in a way that was foreign to us–it was almost like ‘un-thinking.’” He went on to say, “Somehow, we were able to take these basic ideas and twist and quirk-ify them into something that was really new and different for us. The genesis of most the music on this record is of an oversimplified nature.”

We’re not entirely sure how long “Tropic Lame” will be available for streaming and download online, but our guess is if you poke around http://www.facebook.com/teramelosmusic or http://teramelosmusic.com/ for long enough, you’ll find it somewhere. Give it a few listens and you’ll be glad you did. Look for an exclusive interview with Tera Melos right here in Submerge leading up to the album’s release.