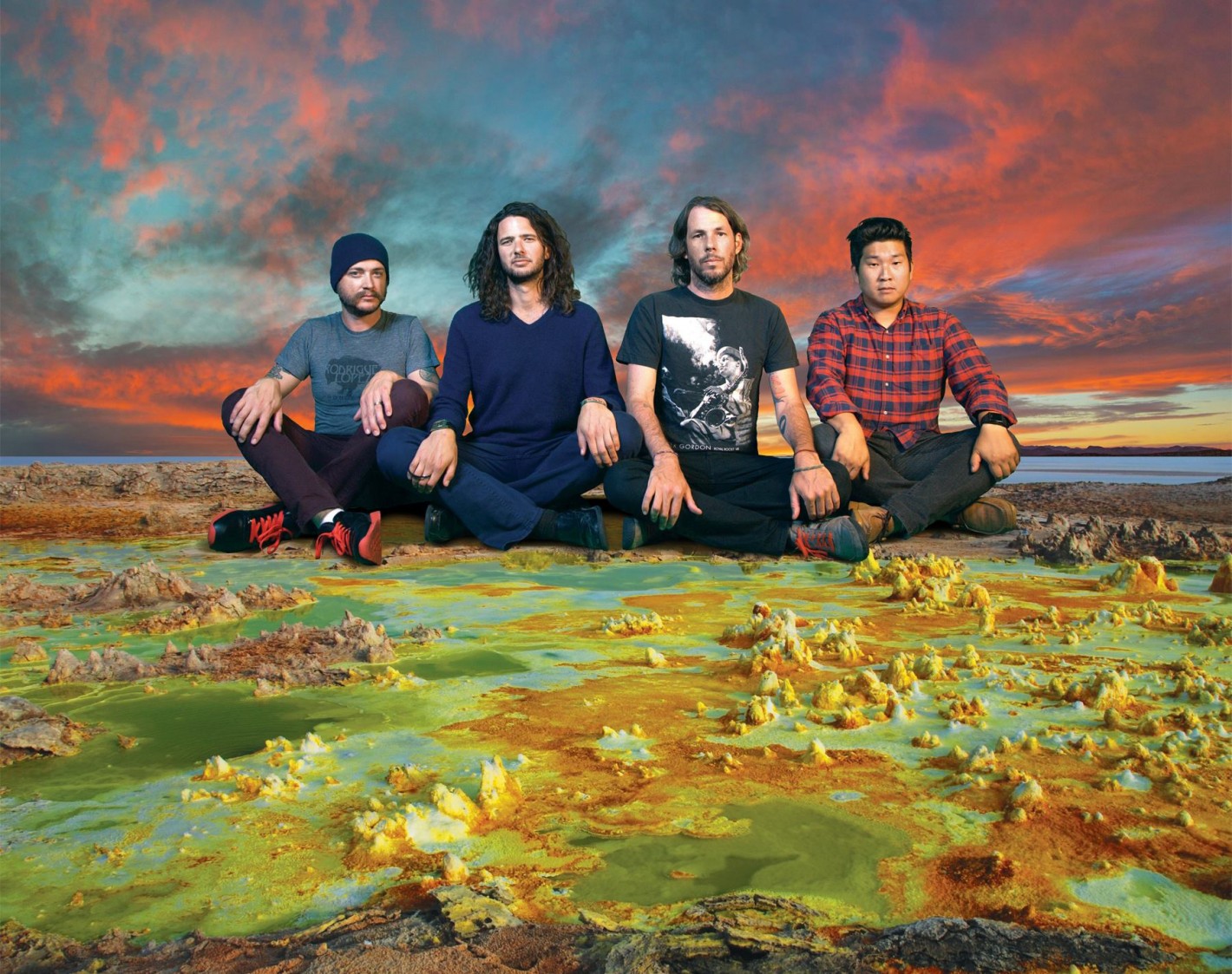 In the summer of 2006, RX Bandits released their fifth album, titled …And the Battle Begun.

That was 10 years ago, a time when the music industry (as a profit-generating entity driven primarily by CD sales) was clamoring for ways to fend off its impending death-by-advancing-technology. Online piracy and the iPod were shredding the major labels one miserable fiscal quarter at a time, and no rabbit they could pull from their hat could stop it.

With this scene as the backdrop, RX Bandits were poised to deliver an album they were immensely proud of, and yet they were weathering their own set of personal storms as well. One had to do with their record label, Drive-Thru, which simultaneously gave them an audience at a very young age, but also pigeonholed them into a scene populated by the poppiest of punk and emo bands. It was a scorching-hot scene, but it had all the signs of a passing trend and, most importantly, the RX Bandits didn’t fit into it.

Their next album was to be their last one owed to Drive-Thru, which had just been acquired by Universal to help with distribution. …And the Battle Begun had been written and recorded and was supposed to come out in 2005, but it wouldn’t see the light of day until a whole year later, and in the end wouldn’t come out under Drive-Thru at all.

RX Bandits lead singer Matt Embree spoke obliquely about the split during a recent phone call, not even mentioning Drive-Thru by name in what was clearly an effort to avoid trudging into negative territory.

Getting the Record Out

“We were in a tough spot,” he said. “They didn’t like it, but we felt it was an honest representation of who we were. The relationship had been breaking down for years.”

The RX Bandits started off as the Pharmaceutical Bandits, a pretty straight-up ska band from Long Beach, very much borne out of the third-wave ska scene that bubbled up in the ‘90s. They were already pushing beyond that narrowly defined genre by their second and third albums, though, both of which were released under the band’s newly abbreviated name. Their fourth, The Resignation, kicked the door wide open. The high-end upstrokes and trombone lines typical of ska music were laced throughout the record, but they were stacked alongside freeform jams, intricate progressive rock riffing, some reggae and plenty of straightforward melodic punk rock. A cult following was solidified, and a foundation for the band’s future was set.

Which brings us to …And the Battle Begun, which was tracked live at John Baccigalupi’s old The Hangar Studios in Sacramento. The guitars, bass and drums were all recorded live in one room, with the tracks bleeding into one another’s microphones and allowing members to feed off each other as they committed the tracks to tape.

“Just imagine the four of us in a square,” Embree said. “If we made a mistake, we started over. It was a way to ensure that even if we wanted to, we couldn’t go back and change it.”

This new album took all of the genre-defying elements of The Resignation and doubled down on them. Drive-Thru was riding high with radio-ready pop-punk bands like New Found Glory and Something Corporate—appealing to teenagers’ emotional sensibilities and moving T-shirts off Hot Topic racks all the while.

“We were the odd band out on that label,” Embree said. “But it kind of helped. People who did like it became fans for life.”

After a drawn-out skirmish with the label, they ultimately split, although the details of the divorce are unclear. …And the Battle Begun was finally released under Embree’s own label MDB along with the brand new, indie-friendly Sargent House.

On September 25, a little more than 10 years after the album’s release, they’ll bring …And the Battle Begun to Sacramento in its entirety.

Album sales were still a crucial part of the business model back in 2006, but the foundation was giving way. Embree remembers watching industry executives attempt to weather the growing storm. He gave the example of The Resignation, which came with a live DVD, allowing the label to tack a few extra dollars onto the price.

“That was the master plan,” he said. “’OK, now we can charge $15 because it has a DVD, and people will want this because DVD pirating isn’t around yet.’ The music industry is built on creative people, but the people who run it are some of the most boneheaded fools.”

He says indie labels are different, mostly because they’ve been forced to think progressively to ensure survival from the get-go. They can’t count on quintuple-platinum albums to float the boat and pad pockets.

As RX Bandits set out to tour behind …And the Battle Begun in celebration of its anniversary, the industry climate is quite different. Music is more likely to be hosted in a cloud and get piped down through a person’s cell phone, with very little income generated in the process.

Embree is accepting of that reality, though, in part because he’s always made his artistic living playing live. RX Bandits toured the world for the better part of 10 straight years, although they’ve slowed down more recently, even taking a hiatus after their 2009 album, Mandala. Any tour they go on could potentially be their last, and that includes this one.

“As you get older, things get more complicated,” he said. “There’s normal life shit. I’d like to make some more [RX Bandits] music, but as of right now we have no plans. This could be it, or maybe we’ll make a new album one day.”

Some of the songs on …And the Battle Begun have been staples in the RX Bandits’ live set since the moment the album came out. Others, as you might expect, haven’t been played in years.

“We most definitely have to relearn some songs,” he said. “There are like two songs on the record we’ve never played live, except for the few times we played the album in its entirety.”

Other songs, meanwhile, have evolved and taken new shapes and sizes over years of live performances.

“’Only for the Night’ became a nine-minute jam,” he said. “That was the closest thing to a pop song on the album. I really like doing that.”

Embree says a tour like this is definitely a nod to the fans, who get to revisit a time and place in their lives through a collection of songs. But the artist gets something special from it, too, he said. The band took a similar anniversary tour for The Resignation a couple of years ago.

“We never got to play those song on a proper stage back in 2003,” he said. “It was our first headlining tour as a band, so a lot of times the stage was super small and the sound system was shitty.”

At that time, the band was also still shaking undeserved stigmas attached to Drive-Thru and a genre of ska that had receded from the mainstream.

…And the Battle Begun was the last album RX Bandits recorded with any horn players as formal members of the band, although trombone and saxophone do show up sporadically on the records that followed “The whole ska stigma stuck with us for a long time,” he said. “I always loved having horns, but once we got to The Resignation and Battle Begun, it felt like our own style. We were incorporating horns into different styles of music.”

There were no four-measure horn melodies sectioned off between verses like you’d hear in a Mighty Mighty Bosstones song (or that first Pharmaceutical Bandits album, for that matter). The horn sounds on …And the Battle Begun are weaved into the fabric of the songs, treated no different than the keyboards, vocal harmonies or any other overdubs.

Embree says he would never try and play through this album without horns, so they can be expected on this tour.

An early RX Bandits song called “Analog Boy” laments the distracting nature of technology on our culture, with lines about our surrender to electronic devices and the isolation that can bring. He points to cell phones and TVs as the culprits in the song.

“Analog Boy” came out in 2001, when most cellphones were plastic Nokias and texting wasn’t much of a thing. Many of us were still on dial-up. MySpace wouldn’t arrive until two years later, and Facebook a year after that. Suffice it to say, whatever he was singing about 15 years ago has since multiplied exponentially.

Embree, who turns off all push notifications on his cellphone and shuts it off entirely anytime he’s writing or playing music, does his best to keep some distance between himself and technology.

He shared a quote from one of his favorite authors, Kurt Vonnegut, after the Orlando nightclub shooting back in June and was treated to the blunt-force power that can be wielded by human beings when they hunker down behind a computer screen or cellphone.

The quote he pasted (which you can find on their feed if you’d like to do some scrolling) wasn’t dissimilar from a lyric you might find in an RX Bandits song. But the whole thing went up in flames, in part because it was being delivered into a social media feed rather than a set of speakers.

“I learned a lot from that,” he said. “I’m not super involved in the social media universe partially because I try to keep my focus on making music and being an artist. I respect them as people, but being too involved in what fans think can derail your focus.”

Come late September, he’ll be embarking on a month-long tour in which the music gets to be the centerpiece. And on this tour in particular, he and the band will get to take a sonic trip 10 years into the past as they do it.

RX Bandits’ …And the Battle Begun 10-Year Anniversary Tour with special guests And So I Watched You From Afar comes through Sacramento Sept. 25, 2016 at Ace of Spades, located at 1417 R St. The all-ages show starts at 6:30 p.m. Tickets are $22.50 in advance and $25 the day of the show and can be purchased online at Aceofspadessac.com