Looks in the Crowd at Sacramento Fashion Week 2014

New York. London. Paris. Sacramento? From Feb. 16 to 22, 2014, the fashion set descended upon our fair city with a week-long celebration that included parties, catwalks and fashion. Since 2006, Sacramento Fashion Week has aspired to challenge the notion that the industry is an elitist enclave where only the likes of the Anna Wintours, Andre Leon Talleys and Tom Fords of the world dare to roam. This challenge to the establishment was in full swing at this year’s launch party at MIX Downtown on Feb. 16, 2014, where the heaving crowd of industry powerhouses, local models, photographers, designers and budding fashionistas mixed and mingled over cocktails, music and, of course, fashion.

On the heels of the packed house at the launch party, the week included several industry events centered around all things fabulous: hair and makeup demonstrations; a social media workshop for enterprising bloggers; an event showcasing the collective talents of the film and fashion worlds; a sold-out showcase of hot, local boutiques; and culminated with the spring/summer and fall/winter fashion shows at the California Auto Museum on Feb. 21 and 22, respectively. With a nod to the eclectic and diverse range of stylistas in the region, Submerge strutted out into the fashion foray and met some of the stylish denizens of the River City—proving Sacramentans can truly work it. 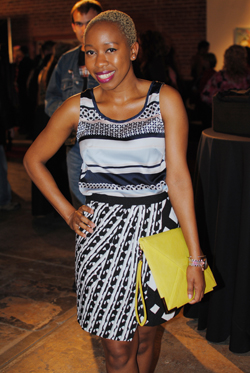 Kathy Chakukuma / Mixing patterns with vibrant pops of color, Chakukuma is the definition of Sacramento chic. Wearing a graphic tank from H&M paired with a skirt from the Target’s latest high-profile designer collaboration with Peter Pilotto—yes, she stayed up late just to snag a piece from the collection after having learned the lessons from the feeding frenzy that was the Missoni-Target collab, which completely sold out in a matter of hours—this fashion-forward look combines soft sculptural shapes with edgy accessories in bright yellow and pink. A recent graduate of the criminal justice program at Sacramento State, this style maven says that being able to network with those who love fashion just as much as she does is the highlight of her Sacramento Fashion Week experience. “It’s nice to be in the same room with people that love what I love.” 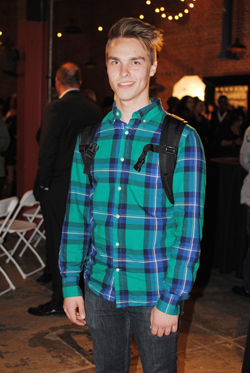 Porter Womble / Proving that an everyday, casual look can be just as fierce as a three-piece, bespoke suit from London’s famed Savile Row, this menswear look Womble’s rocking is a mix of classic Americana and school-boy chic. A study in how to transform a plaid shirt, jeans and a backpack into a look that oozes laid-back chic, Womble works the room of industry leaders with ease. Sourcing pieces from Old Navy, Target and Levi’s, this American River College fashion student exudes a boyish charm that inexplicably blends with the high-fashion crowd mingling about the room. A Sacramentan by way of San Francisco, Womble has immersed himself in the local fashion scene and is thrilled to be a part of the emerging world of Sacramento style. “I work in retail in fashion, and I’m trying to break through in the fashion industry… I realized there is a scene here—I didn’t know we had a scene.” 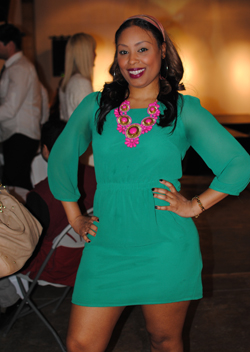 Lashawn Smith / An aspiring stylist who recently transitioned from a career in the law to pursue her passion for fashion after realizing she’d rather provide her friends and colleagues with fashion tips than legal tips, Smith radiates in a Forever 21 dress in jade and silk headband and styles it all with a bright pink collar from Francesca in San Francisco. As a retail associate at Banana Republic, she bears witness to the evolving fashion world in Sacramento and is invigorated and inspired by its evolution. Her confidence that the local scene is coming into its own is matched only by her ability to elevate a simple frock from a bargain fashion house into a look that exudes a decidedly ’60s vibe while managing to come off fresh and modern. “I love fashion. I love putting weird things together.” 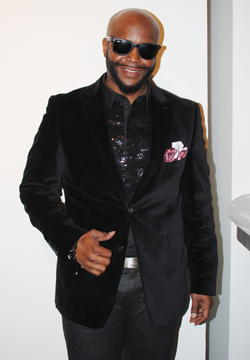 Emetrius “Meechie” Hunter / After having experienced the grandiose convergence of celebrities, fashion editors and models upon the stateside Mecca of fashion (Mercedes Benz Fashion Week during the 2012 collections), this dapper dandy is a full-on fashionista and stuns in an all-black ensemble. Working the room in vintage Ray Ban shades, a crisp pair of Armani trousers and a black H&M shirt littered with glimmering sequins and layered under a Kenneth Cole blazer in sumptuous velvet, this world traveler and self-identified “military brat” dabbles in styling and says fashion is something he embraces every day. And while it’s his first experience with Sacramento Fashion Week, and he was surprised one existed at all, Hunter says he’s impressed by the level of fashion on display. 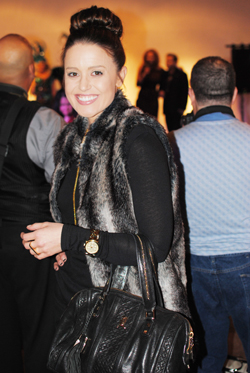 Lindsay Brent / Embracing one of the trends that dominated the runways during the fall 2013/14 fashion shows, Brent luxuriates in her latest fashion find, the epitome of opulence—the fur vest. Her glammed-up look is completed with understated black “skinnies,” a black top and her L.A.M.B. bag in tow. The local stylist, fashion researcher and writer proudly announced that her furry frock was procured from a recent shopping expedition on the vintage fashion ecommerce website, NastyGal, while the other pieces were found at Nordstrom and Urban Outfitters. Brent, who studies fashion at American River College, says local fashion is all about the unexpected and appreciates the diversity of style that is found in Sacramento. 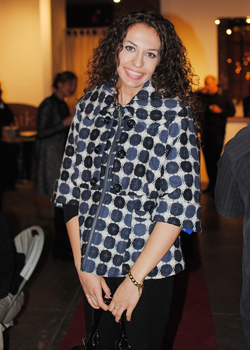 Caitlen Schmidt / Proving that some of the best fashion finds come from treasures unearthed not from the racks of big department stores but rather from those small boutiques that possess some of those one-of-a-kind items, Schmidt wears a wool coat festooned with blue and navy dots that was gifted to her by her grandmother. A shock of bright blue peeks out from under the three-quarter sleeved jacket, giving the look depth and a vivid pop of color. A black handbag adorned with gold studs provides the outfit with an edgy vibe while her elegant black slacks keep the look grounded. Schmidt, who also studies fashion at American River College, has been working tirelessly with the Sacramento Fashion Week production team in preparation of the big fashion shows on Friday and Saturday and says that when people profess that Sacramentans don’t have style that they’re just not looking in the right places. “I love the fashion here, it’s all around. It’s even in small community colleges.” 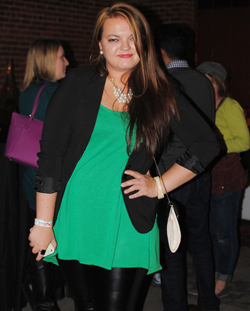 Alena Melnik / A photographer and fashion assistant, Melnik brings a dash of European flavor to Sacramento Fashion Week. With most of her outfit sourced from stores in London and Latvia, Melnik’s look borrows heavily from vintage ‘80s elements. Her black blazer, a vintage piece found in the recesses of her mother’s closet is a one of those foundation pieces that should be a part of everyone’s fashion repertoire. Proving that the liquid legging is still in fashion, a find Melnik credits to JCPenny, the shock of green paired with a nest of pearl baubles draped about her neck, the look is refined yet edgy. Melnik, who is currently working on a line of vintage-style maxi skirts, says that while this is her first foray in the world that is Sacramento Fashion Week, she’s been impressed by the level of fashion on display. 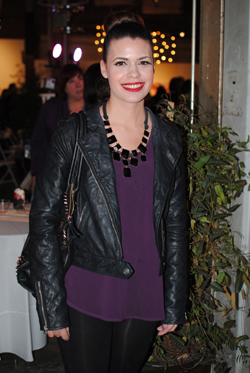 Kayla Carriker / Part of the Sacramento Fashion Week production team, Carriker mixes hard and soft elements in her look—each piece a product of her years working at Loehmann’s before its sad demise. A black, cropped leather jacket with quilted sleeves hangs over a top in a rich eggplant hue. While minimalist in scope, her look is amped up with fun and funky accessories: a necklace constructed of black tiles and her black bag adorned with spikes gives the look a punch that elevates the entire ensemble. Her elegant hair and makeup stand up to the strong elements in her look. As one who is on the front lines of Sacramento Fashion Week as a part of the media and public relations force, Carriker says that Sacramento fashion is really coming into its own and people are really bringing it this week. “Fashion has definitely grown a lot. Midtown has evolved from casual looks into people really getting into fashion. It’s great to see the change.” 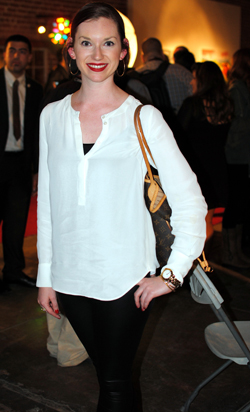 Caitlin Robb / Another member of Sacramento Fashion Week’s production team, Robb’s look is minimalist yet completely chic. A white silk tunic drapes elegantly over a pair of black leggings that are tucked into a pair of classic leather riding boots. A staple in any fashionista’s closet, an archetypal Louis Vuitton tote hangs effortlessly off of her delicate shoulder as she makes her rounds networking with the models, photographers and other fashionable Sacramentans. The J Crew visual merchandiser who is a part of the crew in charge of staging the runway shows says that Sacramento Fashion Week is evolving and continues to surprise her every year as more and more people embrace the concept that one doesn’t have to live in New York, Los Angeles or Milan to experience amazing fashion or be a part of the fashion world. “The fashion scene is growing, it’s getting bigger. A lot of people are making fashion happen here.” 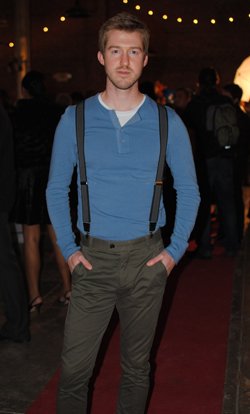 Tanner Stymeist / An actor who recently transitioned from the stage to film, Stymeist’s style is a mix of old-world charm and modernity. As a working actor in the industry for more than five years, he’s seen the marriage of film and fashion and thinks the two worlds are a natural fit. His olive trousers are a subtle foundation for the dusty blue Henley shirt strapped down by a pair of grey and black snappy suspenders. And while he isn’t a slave to fashion he says he’s always been fond of creating his own style and employs a casual yet elegant philosophy to the manner in which he dresses. For Stymeist the thrill of dressing comes from the process of creating a unique look that blends personal style with elements that draw from the style of a bygone era. “I’ve always loved the ‘20s and ‘30s and the clothes from that time. I just love that era and that feel.”