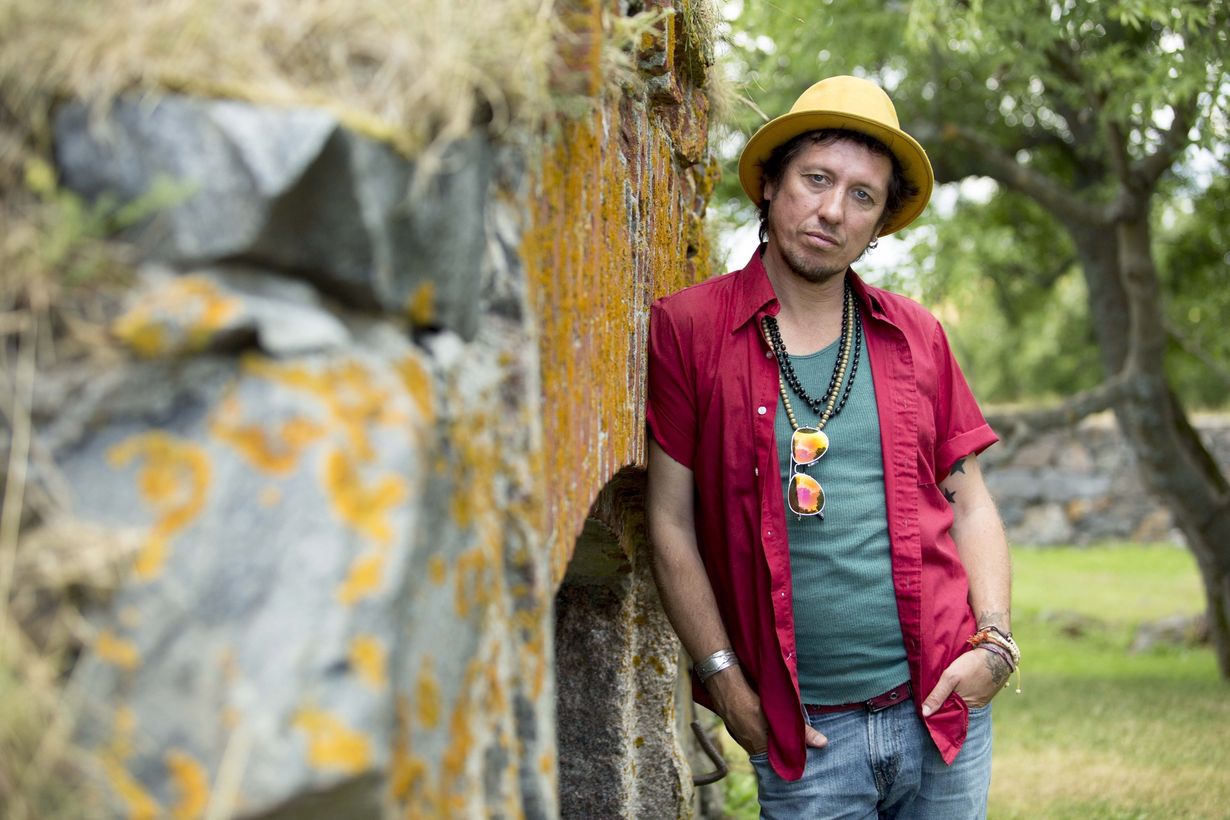 Mr. Sami Yaffa. Guitarist. He was a co-founder of the Finnish Glam rock group Hanoi Rocks in the ’80s. He started touring when he was 15 years old and has been in more bands than you can count on one hand. He’s been glamorously shaggy and eclectically chic. He’s lived in Finland, New York City, a Spanish Isle and now in Ocean Beach, San Diego. But through the bands, the years and the different cities, Yaffa is still rock ‘n’ roll. Even when playing acoustic guitar with his vocalist wife Karmen Guy in the diverse, “globalista” band Mad Juana. The band released their new album, Bruja on the Corner on Aug. 5 on iTunes, due for a physical release on Sept. 2.

While on vacation in the vineyards of Southern California, Sami and Karmen chatted with Submerge about the past, the present and their future stage-stop in Sacramento with fellow members of Mad Juana.

You’re currently in two bands, The New York Dolls and Mad Juana, but let’s talk about some of the old stuff you’ve done. You were in Hanoi Rocks and you were with them for five of their albums.
Yeah, it was the original Hanoi Rocks from 1980 to ’85. They resurrected Hanoi Rocks maybe like four or five years ago. I was in the original band not in the current re-incarnation of it.

Was part of the reason you left Hanoi Rocks at that time was because of the death of your drummer Razzle?
We were very young. When that happened, I’d just turned 21 and we’d been on the road for like five years solid and basically very, very burned out. Then this horrible thing happened. I don’t think we had the mechanism to deal with it; we were way too young. The management didn’t really give a flying fuck about it. They just wanted to put us back on the road and keep going as usual. There were personal problems between the band members and a lot of drug problems from hell. Everybody was a huge mess and when that happened it was just icing on the cake. I actually stopped playing for like three years after that. The whole music industry just made me vomit. It still does, but now I just bring a bucket with me.

You’ve had quite a diverse musical career and the list of bands and collaborations you’ve done have really stacked up over the years. How have your experiences contributed to the way you see and create music now?
I think it’s all a learning and growing experience. You put all your experiences in a bag and you take the bag with you. With Mad Juana, it’s like the combination of everything I’ve ever played with and everything I’ve listened to. And for some reason, when I’m with Karmen, we had different experiences, but we were in the same kind of mindset when it came down to creating art and being kind of bull-headed about it. Doing your own thing and creating your own thing, so it’s not just being part of some kind of a genre that is popular now.
Especially with Mad Juana, when we started in New York four or five years ago, we really got started with this acoustic version of Mad Juana, all the shows we did were like these Balkanese celebrations, orgy-astic alcohol binges. The whole audience was falling on the stage and taking their clothes off and making babies while we were playing. Keeping the spirit with what we do, it’s a very uplifting and happy thing, but there’s a lot of content in the lyrics and the history of the music that we do.

Do you feel like when you were younger that you were playing the type of music that you really liked at that time that was also very popular, and now you feel more compelled to play what makes you feel good and what really comes more organically?
I think it all comes very naturally. I play with New York Dolls and you can’t get a better fucking rock ‘n’ roll band than that. I thoroughly 150, 200 percent enjoy that and I love it to death. But with rock ‘n’ roll it’s very hard. I don’t want to play in a half-ass rock ‘n’ roll band. After Hanoi Rocks, I had a very hard time to join any other bands because everything just seemed fuckin’ Mickey Mouse”¦I think I’m a little bit schizophrenic”¦I think they both are very, very organic and natural to me, so I don’t see any clash at all with those two. What I do with Mad Juana and New York Dolls, I think it’s the same thing.

It’s funny you mention that schizophrenic personality that you have with music. I was curious about the name Mad Juana. I came across “Juana La Loca,” [Queen Juana 1 of Castile in the 16th century]; is that where you got that name?
That’s a funny analogy. I like it, that’s very cool. Yeah, now that you mention it—but we didn’t originally think of it that way. We actually originally got the name with Karmen.
Karmen had a book by Patti Smith called Babel, which is a collection of poems. There’s a poem called “Mad Juana.” Actually, I’m gonna let Karmen tell this whole thing.

Karmen: It just kinda happened naturally. I was looking through this book of poems by Patti Smith and a few days later everyone was like, “Oh Mad Juana;,” Mad Juana is this horror story and we were getting the real story from the people there [in Montori in the Spanish Balearic Islands] and she was very progressive politically and very much for the people, and I was like, “let’s just call it Mad Juana.”

If you could finish the sentence “Mad Juana sounds like”¦” What would you say?
Globalista. I hate the term “world music.” It’s like the music that The Clash used to do in the early ’80s, and to a certain extent London Calling and all that. That had a huge influence on me when I was a kid because they were mixing dub reggae and they were bringing all different kinds of influences from music around the world without turning into a fuckin’ cheese ball.