Photo above by Katy Hayek

It’s heard in the echoes of music from past greats and pulses between the new musicians of today. With seven years to their credit, Zach Goodin, Marc Kallweit and Devin Hurley of Sexrat look forward to releasing their second album, Masters of Obscurity this fall. A three-year labor of love in the making, the album was recorded at a 1900s vaudevillian theatre in Weed, Calif. that is now converted into Radiostar Studios by avid instrument and gear collector Sylvia Massy.

Not only is Massy known for collecting pieces of rock ‘n’ roll history, she’s also known for producing tracks for multi-platinum musicians such as Tool, Tom Petty and the Heartbreakers, R.E.M and more. What’s more is her collection of vintage gear and equipment, which, according to Sexrat guitarist and vocalist Goodin, all have a story behind them.

“She turned a 6,000-square-foot art deco movie theater, like a small version of the Crest [Theatre], into a recording studio with tons of vintage gear,” explains a smiling Goodin, his eyes gleaming with excitement behind a pair of dark shades. “Every piece of equipment has some crazy story like, ‘Oh, I got that from the Stones,’ or, ‘I got that from Led Zeppelin.’”

Strumming guitars held by respected rock ‘n’ roll pioneers and turning up the amplifiers created custom by companies like Marshall or Mesa Boogie for some of the biggest names in music history kept inspiration flowing during their time in Weed. Goodin says having access to Massy’s never ending collection of rock ‘n’ roll trinkets set the tone during Sexrat’s recording sessions.

“This place, just the vibe and the acoustics, makes for a way bigger sound,” says Goodin of Radiostar Studios. “We took our time doing it and [the album] sounds great. They’ve got great gear up there and they’ve got a good ear, so they really push you to do your best.” 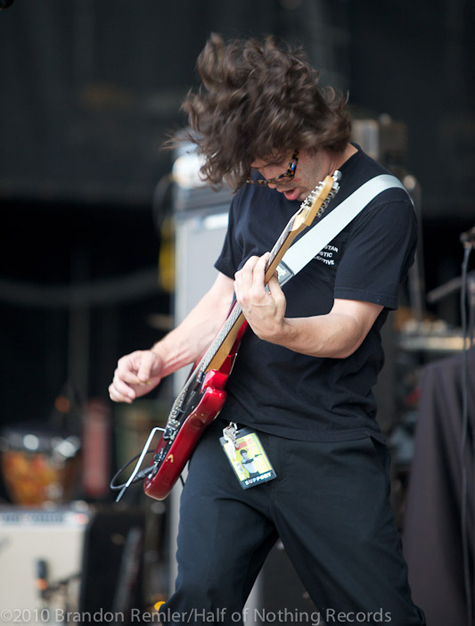 The 12-song album, recorded by Massy and her main engineer, Rich Veltrop, features Bud Gaugh, drummer of Sublime and longtime friend of the band’s, and also Gaugh’s wife Nicole Hutcheson. Goodin met Gaugh while living in Southern California playing music for various bands and says Gaugh even hooked Sexrat up on tours with musicians like Matisyahu, Pepper and Fishbone.

Although Goodin says the band felt like “the redheaded stepchild” of that particular tour last summer because Sexrat sounded the least like Sublime, he feels shows with a fixed audience are perfect environments for his band, because it exposes them to a variety of listeners. At the end of the day, Goodin and the rest of Sexrat just want the opportunity to connect audiences to their music, despite genres.

“We get tied into the reggae rock scene, but that’s not really what we’re doing,” explains Goodin. “Maybe a little bit, but I would say we’re probably more psychedelic rock. We’re not really a reggae band.”

Sexrat jam, intermingling neo-psychedelic organs with guitar solos, effects pedals and catchy lyrics prominently in their song, “Made in China.” The song features Gaugh on drums alongside Sexrat’s drummer, Hurley, who often plays keyboards simultaneously and is now adding backing vocals to his list of duties. But, at the moment, Goodin says his favorite track off their new album is “Walk of Shame,” a song he says is always fun to play. Packing a variety of sounds, the song starts off with surf rock-style guitars, mellowed out with the introduction of Goodin’s vocals resonating in ‘90s alternative rock, and then finished with hard-hitting drums.

“We’re all in our mid-30s, and we are a product of the ‘90s. That’s true to our sound,” says Goodin trying to pinpoint Sexrat’s genre. “We’re kind of hard to categorize. We cover a lot of ground. It’s all just music to me I guess, but we all have our own way of playing and together that’s what makes our sound.”

When they’re not rocking stages up and down California, the guys of Sexrat spend time in town with friends and family and Goodin has even acted as musical teacher and coach to the girls of punk rock duo Dog Party. He says witnessing sisters Gwendolyn, or his preferred “Gwenny,” and Lucy Giles’ eagerness to just play music and learn is refreshing to see in the youth of today. Especially as he and his two band mates continue to perform after all these years.

“I’ve been playing since I was 10 years old,” remembers Goodin. “It’s the same old guys that play music [in Sacramento]. As we get older, we see who’s more dedicated–like all those guys from Kill the Precedent, we’ve all played the same backyard parties with the Filibuster guys; it’s cool to see everyone who’s still playing.”

Although their album isn’t set for release until later this fall for those outside of Sacramento, Sexrat will be performing at next week’s Concerts in the Park series alongside Relic 45, Reggie Ginn and more. The guys will also have fresh copies of Masters of Obscurity for sale at Cesar Chavez Park offering those in attendance first dibs for an early listen. After their performance at the park, the guys of Sexrat are off for a weekend of music in Goodin’s old stomping grounds, Long Beach. But, what they’re really looking forward to is performing at Massy’s annual 4and20 Blackbird Music Festival in Weed.

After spending a year getting to know Sexrat in her massive studio, Massy invited the guys to play the main stage at her event this August alongside bands like Forever Goldrush and Merle Jagger. The two-day festival boasts seven outdoor stages, five indoor stages and myriad genres, vendors and street performers.

“They have managed to capture something rare in today’s musical offerings–true honesty,” says Massy of Sexrat. “They are organic, gritty and melodic. They are fun, and yet they express deep emotion in their music with inspired performances coming directly from the heart.”

Sexrat will play Friday Night Concerts in the Park at Cesar Chavez Park in Sacramento on June 15, 2012. To get up-to-date info, like the band on Facebook at http://Facebook.com/sexrat.