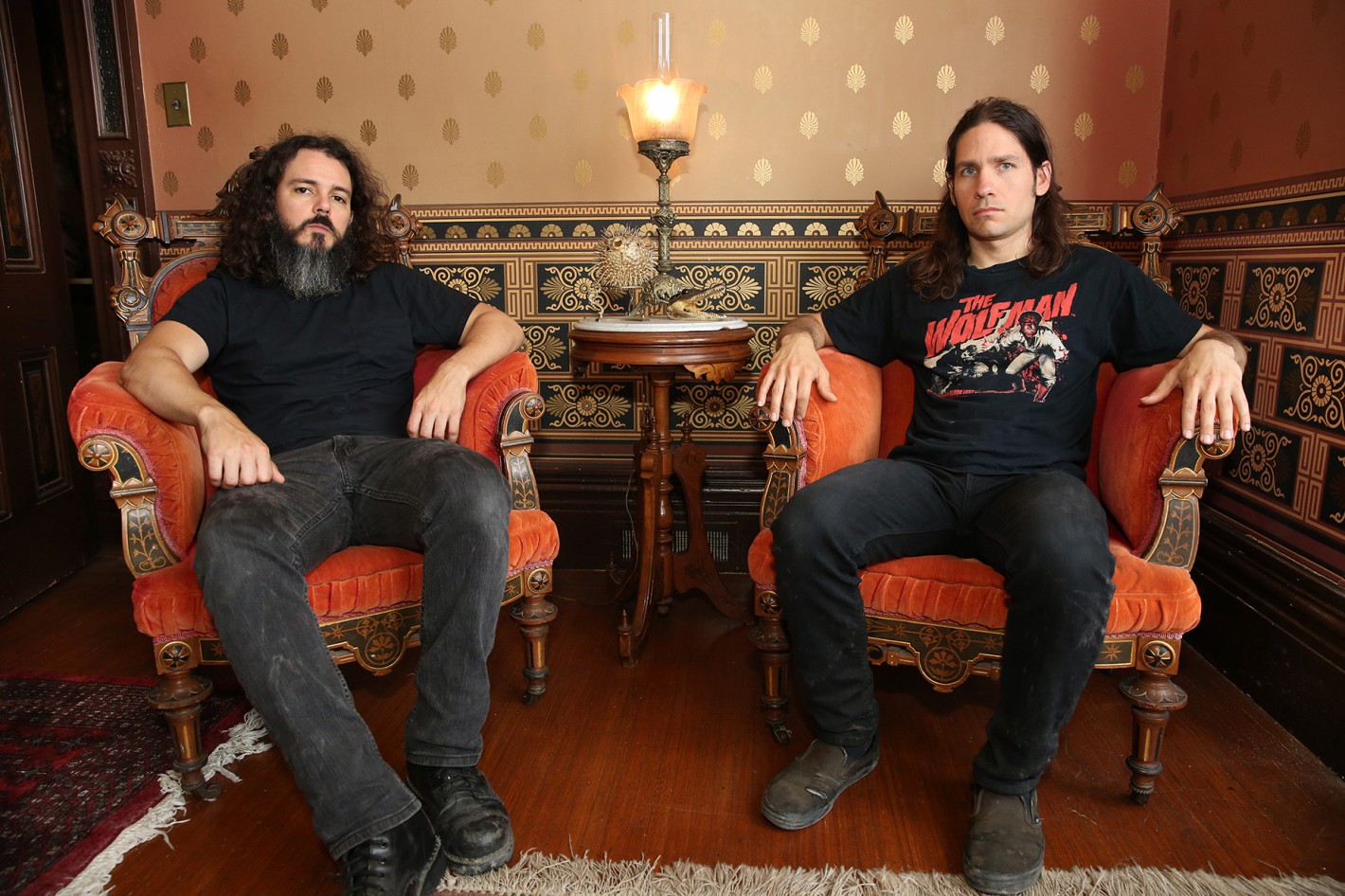 Over the course of almost 15 years playing their unique brand of sludgy thrash metal, Jason Landrian and Rafael “Rafa” Martinez—otherwise known as San Francisco two-piece Black Cobra—have toured the world with some of metal’s most legendary bands. The band has also released five full lengths, including their latest, the much-anticipated Imperium Simulacra, which came out Feb. 26, 2016 on French label Seasons of Mist.

But Black Cobra’s longevity and success in the international metal scene hasn’t really changed the band’s spartan approach to being on the road. Driving between Reno and Salt Lake City, Utah, two of the stops on the band’s string of headlining dates ahead of a nationwide tour with Bongzilla, vocalist/guitarist Landrian explains that beyond just covering all the bases musically, the two-man team also typically still cover all the logistics of being on tour themselves, from driving to loading gear to selling merch.

“It’s a little bit difficult sometimes,” says Landrian. “But we’ve kind of got it down, to be honest. Not to pat ourselves on the back but we’ve been doing it for a while. We know the drill, so we’re pretty good about being quick getting off stage and getting behind the merch booth.”

When it came to releasing a follow-up to 2011’s Invernal, however, Black Cobra definitely took their time. The result is Imperium Simulacra, an album that adheres strictly to the band’s stripped-down, two-piece approach, without sacrificing an ounce of heaviness. Though Imperium Simulacra certainly has its stony moments and a smattering of psych overtones, Black Cobra avoid over-thinking things, opting instead to keep their tempos brisk and their riffs diabolical.

With Black Cobra and Bongzilla set to swing through Sacramento’s Starlite Lounge March 7, 2016 we talked with Landrian about the band’s history, their current tour and the process behind creating Imperium Simulacra.

You’ve toured with pretty much every band that a band playing your kind of music would want to tour with. Does it feel like you guys are sort of a band’s band in terms of groups wanting to take you on tour?
We’ve been very fortunate. It’s hard to give a concrete reason as to how or why certain things come down the pipe for us, but it’s awesome. Of course we want to tour with bands like Yob, Bongzilla and The Sword. All the bands we’ve toured with have been really great. We just feel really fortunate that we’ve not had too many, if any, bad tours. Actually, I don’t think we’ve ever had a bad tour. I mean, some tours are bigger than others. But we’re always in good company.

You’ve also run the full spectrum over the years, though, as far as playing huge festivals and tours to playing really small venues in the middle of nowhere. Is there some nuance between the two, in terms of the way you play?
I think inevitably there’s more energy there when the crowd is, like, more crazy or when there’s more people there, but we try to bring the same level of energy for any size crowd we play for, whether it’s at Hellfest, or a hometown show or somewhere in the middle of the country. We play intense music and that kind of makes the energy sort of inevitable; we’re gonna put on an intense show or do our best to do that.

Is it nice to have some fresh material to play with the new album?
For sure. That’s sort of the noticeable thing about these shows leading up to the Bongzilla leg of the tour is that we haven’t actually played a lot of these songs live before. We were playing one song, “The Messenger,” on our last tour with Yob and, I mean, we’ve been rehearsing them for a long time so we feel pretty comfortable.

But it’s nice to get a little work in before we get to the main leg of the tour. We’re playing almost all the songs from the new album, trying to vary it up a little bit each night. It’s nice to play some new songs, but also play some other ones that people are more familiar with too.

Was it part of the plan to take five years in between this record and the last or did it just sort of turn into that?
Yeah, it kind of happened. It wasn’t like we made a conscious effort like “Hey we need to take a really long time off.” There were some personal things at home that we felt like we needed to be around for. When you’re a musician that goes on tour a lot, you’re not at home a lot. So there are things there that sometimes you need to be around for, so that was part of it. Another part of it was we wanted to not burn ourselves out and put some space between tours. But that being said, we really stayed busy during the last four, I guess five years on paper. Imperium Simulacra was recorded last June, so that album’s been done for almost a year now. But with things like release schedules and finalizing artwork, those things take time. And we didn’t want to rush anything. Those things all sort of take time. And before you know it, it’s like, “Whoa, it’s been five years since our last record.”

Have you found it’s built a certain amount of suspense and anticipation around the album?
Yeah, it seems so. People are like, “Wow, the long awaited album.” I’ve seen that here and there. It’s nice that it seems like people are anxiously awaiting it. And we’ve gotten a lot of good feedback so far, from people that have heard it. We never wanted to rush anything, writing-wise. So we did take our time, more than usual. But it’s nice to hear that people are excited to see us play new songs. It’s been a really good, warm reception.

With that extra time, was there a temptation to add more layers to the record, or expand things a little instrument-wise? Or were you pretty tied to the two-man principle?
We’re always of the mindset that when we write something we’re gonna play it in front of people live. So we want to make sure that we can execute everything in the live setting as well as the studio setting. We never want to get too crazy with something that we couldn’t pull off live. But at the same time, we’re always thinking about expanding our sound. We like a lot of different types of music, so it’s nice to bring all of those influences in, but in a way that still maintains the core of our sound. We always want the sound to evolve, but we want it to evolve organically.

There seems to be a sci-fi theme on Imperium Simulacra. What was the inspiration behind the songwriting on this record?
Rafa was really into reading some Philip K. Dick stuff and reading some Ray Kurzweil stuff, about how we’re approaching the possibility of singularity happening, where technology could surpass human advancement. So that was kind of the catalyst for a lot of things we wrote about. But we’re also just really big fans of science fiction in general, so we took a lot ideas from that, but also worked in our own thoughts, and stories that we imagined. And there’s always kind of an undercurrent of chaos and destruction in most of our lyrical content on all of our records [laughs], so I think it fit really nicely with that as well.

Looking at the routing for this tour, it looks like a pretty long one.
I think it might be the longest one we’ve ever done. We’ve done a six-week tour before, but I don’t know that we’ve ever done a seven-week tour and I think this one’s right around seven weeks.

Can that get grueling at a certain point, especially being that there’s only two of you?
We both go into something like this knowing what’s expected and what we’re going to do. By the end, there’s definitely some “I can’t wait to get home” kind of thoughts. But it’s nice to be out of the road. We like touring, we like playing shows, we like playing music in front of people. There’s that aspect of wanting to sleep in your own bed, but it’s also nice to go from town to town, playing music. It can burn you out, where you want to take a little time away from it, maybe. But there’s always a point where we’re ready to go back and slug it out on the road again.

Check out Black Cobra, alongside stoner metal legends Bongzilla, Lo-Pan and Against the Grain March 7, 2016 at Starlite Lounge, located at 1517 21st St. in Sacramento. This show is 21-and-over, and starts at 8 p.m. For more info or to purchase advance tickets, go to Atlanteancollective.queueapp.com.