Alive at Night • The Irresistible Aura of SG Lewis 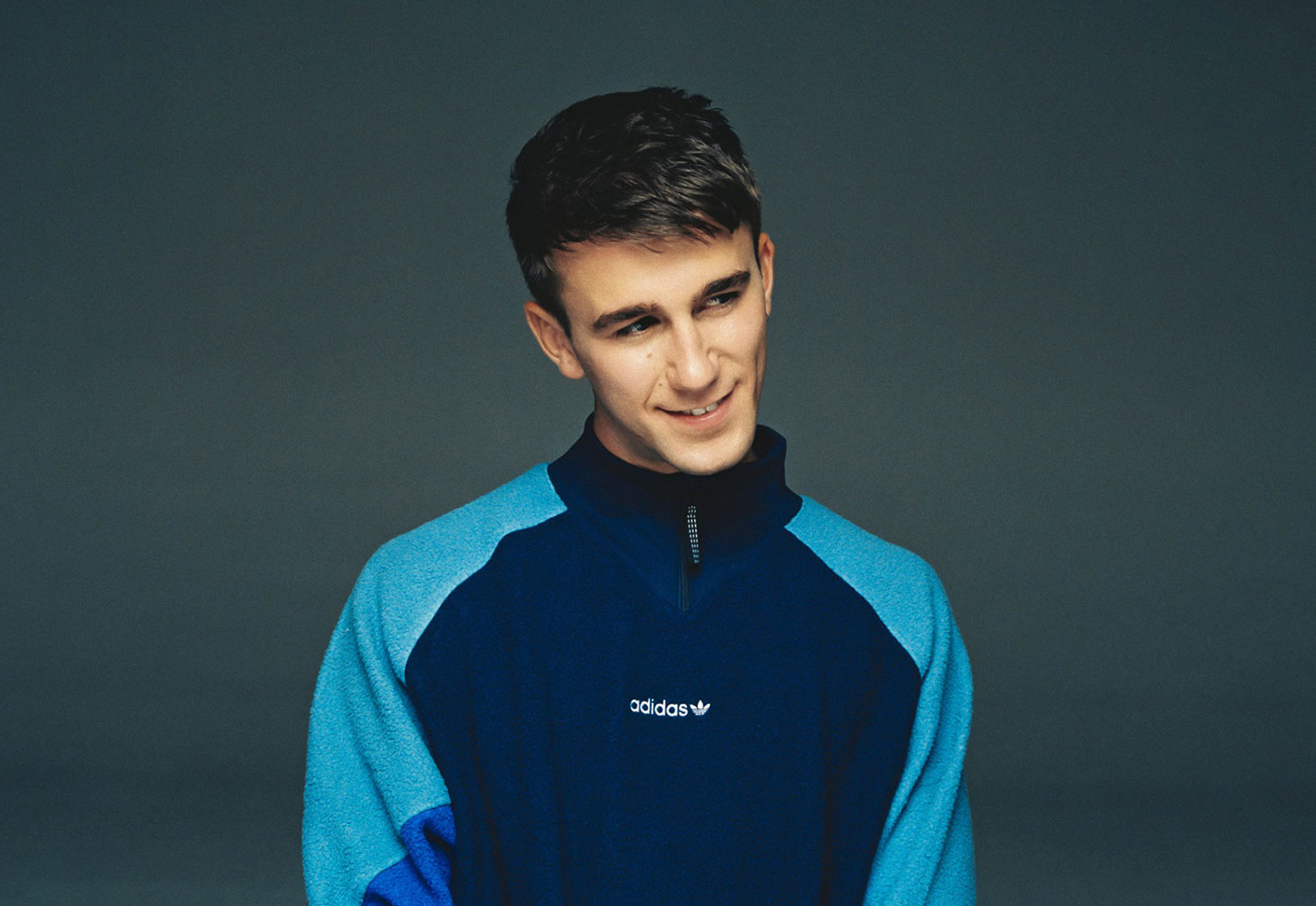 “I’m a little bit tipsy but it’ll make for an interesting interview,” SG Lewis admits to me over the phone, eight hours east of the Pacific Time zone I just woke up in. That phrase, and the naturally engaging tone that accompanies it, isn’t entirely necessary in capturing my attention given the talent of the interviewee on the other end of the line, but it doesn’t hurt.

Fresh off of a night of spinning records at a club in Paris, the English singer-songwriter, multi-instrumentalist and producer begins telling me how happy he is to be back in the City of Light—the same place that propelled his career forward—as he walked through a lively French evening.

Lewis, a 25-year-old electronic musician, has been a busy man over the last few years, not by fielding interviews on the fly, but by producing commercially successful solo and collaborative projects since signing with PMR Records in 2014. Not long after signing his first professional deal, the young Englishman was invited by his new labelmates and lauded electronic duo Disclosure to perform at the Dalt Vila UNESCO World Heritage site on the coast of Ibiza.

“I was playing the evening set and the sun was setting over this 3,000-year-old castle, and I was playing this really slow, chugging, melodic house and techno, and I remember that was a real ‘pinch yourself’ moment,” he says.

“One day I’d love to throw a party there myself,” the inviting producer adds.

If you’re familiar with Lewis’ collection of music, you’ve probably heard his recent trio of EPs that coalesce to form a singular concept album—Dusk, Dark and Dawn. Familiarity aside, it’s crucial to understand what led to this genre-defining story in song form.

Before signing with PMR Records, Lewis played guitar in several rock bands throughout his teenage years, eventually finding his soul in music you’d typically hear in European nightclubs. That moment came when Lewis found his way into a residency at the famous Liverpool club, Chibuku.

“I remember having a distinct moment of enlightenment in terms of electronic music where I walked in and Ben Clock was playing in the theater,” Lewis recalls. “I remember hearing that for the first time and being like, ‘Holy shit.’”

Apparently that’s all it took to hook the humble, wide-eyed Lewis into a scene that would transform his life forever.

After gaining credibility spinning tracks and finding his sound, he released his debut EP Shivers in 2015. A year later, he honed his style further with the EP Yours, highlighted by “Holding Back,” a club-y song cross-pollinated with an R&B feel courtesy of the captivating vocals of the Maryland-born singer, Gallant. This song is the epitome of the “SG Lewis sound,” one that fellow English musician and friend James Vickery says makes Lewis the “king of electronically influenced R&B.”

He may not be true English royalty, but among the music community, he’s been handed the crown. His humble mentality however defines him as a man of the people.

“Music is an emotional thing and if people aren’t having genuine emotions, then it’s hard to come up with something that moves people,” the self-aware musician says.

Connecting with people has always been crucial to the arts, whether we recognize it or not. It’s this innate sense of belonging that allows us to let loose and enjoy music for its beauty, which was a key reason that Lewis began writing the EPs Dusk, Dark and Dawn in 2018.

“In experiencing electronic and live music, the moments of overwhelming genuine happiness, the connection you feel in those environments—I can’t think of another instance in my life where I can equate happiness and euphoria with one thing,” he says of the theme behind the EP trilogy.

The naming of each EP is quite literal, detailing the different stages of the evening as we experience our own euphoria in Lewis’ dream world—beginning with the plummeting of the sun toward the horizon in Dusk as we are pulled deep into the Dark depths of night where we find our footing and unleash pure ecstasy before slowly calming into the Dawn that brings new life.

Dusk, the first scene of his audio-screenplay, starts with the slowly building, ethereal “Sunsets (Part 1)” leading into a cathartic “Part 2” of this harmonic fade of daylight. The third track is one that Lewis said is “one of my favorites to this day” and one he feels is “underrated” compared to his more commercially successful tracks.

That song—“Aura”—was created in a hotel room in Rio de Janeiro while he spent a week off from touring in the bustling Brazilian city.

“I was feeling so inspired,” he says about his time in South America. “I was just trying to find some drums that gave me the feeling of all the music I was hearing in Rio.”

Perhaps the sunshine helped, too, for an artist used to the overcast English skies, admitting that he suffers from seasonal affective disorder. But for someone who finds solace in the sunlight, he seems pretty adept at controlling his mood at nighttime.

A little under a year after Dusk, the five-track record Dark was added to Lewis’ quickly building discography. The EP kicks off with “Again,” a classic trance track that transports the listener into a Berlin basement where you can almost hear the sound reverberating off of concrete walls. The vibe transitions with the next track, “A.A.T.,” featuring California rapper Drew Love, who adds his braggadocious West Coast lyricism to Lewis’ bouncy snares. The standout song of the album, though, is without a doubt “Hurting” featuring Aluna Francis from the famed London duo AlunaGeorge—showcasing that vintage European house vibe that Lewis learned in Liverpool.

And just like his formative DJ residency, it was time for Lewis to complete this chapter before moving on to his next big show. That conclusion came in the form of Dawn, an album that forced Lewis to channel his singing voice. His vocals pull us into this record on the intro track “Blue.” Like so many of his other songs, you’ll notice his signature ‘sparkle’ echoing throughout, he says, “Once I stumbled across that [sound], it just became something that felt good on so many productions that in a weird way became my ‘producer tag.’

“I think one of my favorite things is to take samples that belong in a different genre and put them in electronic music,” he continues.

The hip-hop drums that you may have heard on ‘90s classics like Common’s “The Light” gel nicely with Lewis’ affinity for sparkly sounding keys, exemplified on the third EP of the Dusk, Dark, Dawn trio.

It’s apparent that Lewis has a mind made for musical production.

“If I was stuck to one thing and tried to perfect that, I think my attention span would be too short, I would grow bored with it,” Lewis says. “Production has so many different elements, you can never stop learning.”

He continues on in an introspective and honest manner, saying, “The thing about music: As much as I have imposter syndrome every day of my life—if I were doing things that I felt comfortable about every day then I’d grow tired and bored of it. The things that push me outside of my comfort zone are the things that excite me the most.”

It’s a little startling that someone so successful in the music industry still has doubts about himself, but that’s the nature of a creative industry, especially in an age dominated by the pressures that social media forces upon those we deem to have made it.

But what exactly does making it look like to Lewis?

“This sounds kind of dramatic,” he warns. “From the first day that I started playing music I remember fairly early on a friend of mine made me sit down and write what [I] want from this. What are your measures of success? Because if you don’t do this then you’ll always be wondering ‘what’s the next thing?’ O2 Academy Brixton was that thing.”

For the uninitiated, O2 Academy Brixton is one of London’s oldest and most historic music venues. It’s essentially a cathedral for music worshippers, more so in the European community, but globally, the reputation is rather strong.

Lewis was scheduled to play there on Feb. 1, 2020 but had to postpone the show to prioritize the completion of his next project: Beyond Dawn.

“When I play that show, I want it to be something that I’m excited about where I feel like I’m presenting people with something brand new,” he says. “It was a hard decision to make [to postpone the show], but I’m really glad that I did make [that decision] because I want there to be a genuine emotion between me and the audience when I get there.

“Once you’ve done a Brixton you can tell your grandkids, ‘I did it!’” Lewis enthuses. “The really exciting thing about that is that anything beyond Brixton is a bonus.”

We as an audience, have yet to unlock that bonus, which is probably a good thing considering Lewis expects to release Beyond Dawn within the next year.

“I wanted to leave that as a musical era and vision and whatever comes next is its own iteration,” he says about his projects.

Some things just can’t be left in the past though. Just listen to Lewis’ newest produced single “Pressure,” sung by James Vickery.

“We met for breakfast and he’d been telling me about this situation he was in and I was like, ‘Dude, the song’s already there.’ When you have something going on in your life that you just have to say then it’s just a case of articulating it,” Lewis says.

As a result, that electronic-R&B sound is quite possibly at its highest barometer on the SG Lewis grooviness index during this track.

There’s no specific date yet for the release of his newest album, but if we can expect anything, it’s that he’ll continue dropping little nuggets like that track with Vickery leading up to his next album’s release. On a more practical note—at least for the Northern California fans—Lewis will be spinning his classics on the final day of Lake Tahoe’s Snow Globe Festival alongside fellow titans of the electronic music world. He’s never been to Tahoe and it definitely won’t resemble the O2 Academy Brixton, but I think he deserves the energy that he’d receive in his home country, which probably won’t be too difficult as he dazzles with his captivating light shows, soulful sounds and liberated vocals.

Close out 2019 in pure euphoria at this year’s Snow Globe Festival at the Lake Tahoe Community Playfield in South Lake Tahoe from Sunday, Dec. 29–Tuesday, Dec. 31. SG Lewis will play on New Year’s Eve, which will feature Skrillex as headliner. Other acts performing the three-day festival include E-40, Vince Staples, Fisher, Gigantic Nghtmre, Griz and others. For a full lineup and to order tickets, go to Tahoesouth.com.